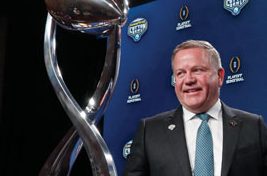 SOUTH BEND, Ind. (AP) — Kyren Williams raced 91 yards for a touchdown early in the fourth quarter and No. 11 Notre Dame held off Sam Howell and upset-minded North Carolina 44-34 on Saturday night in a game that had over 1,000 yards in offense.

Williams ran for a career-high 199 yards on 22 carries to help the Fighting Irish improve to 7-1 with their third straight victory — and ruin the 400th collegiate game for North Carolina Hall of Fame coach Mack Brown.

Howell, who became the Tar Heels’ first quarterback with over 10,000 passing yards, finished with 341 yards on 24-of-31 passing with one touchdown and one interception. He added another 101 yards on 18 carries, one a 31-yard touchdown run that kept the Tar Heels in it at 41-34 with 7:23 to play. It was the third time this season he has passed for over 300 yards and rushed for more than 100 in one game.

But after his touchdown run, Notre Dame responded with a 13-play, 73-yard drive that ate up 5:46 of the clock, leading to Jonathan Doerer’s third field goal of the game from 21 yards that were the final points of the wild scoring night.

With Notre Dame, which led 17-13 at halftime, clinging to a 31-27 lead early in the fourth quarter, Williams, took a simple handoff from quarterback Jack Coan right and then reversed his field, breaking past defender Tomon Fox. The Irish running back got a block downfield from tight end Michael Mayer before outracing linebacker Jeremiah Gemmel to the end zone, tying the sixth longest touchdown run in Notre Dame history.

Coan finished with 213 passing yards on 16-of-24 passing with one touchdown — a 21-yarder to Kevin Austin — and added a 21-yard running touchdown in the third quarter. Freshman Tyler Buchner threw a 7-yard touchdown pass to Avery Davis.

North Carolina: Notre Dame never really had a handle on the 6-foot-1, 225-pound junior Howell, who showed off a talented right arm along with his elusive feet. The Fighting Irish did manage the one interception and also three quarterback sacks.

Notre Dame: The Irish played up-tempo most of the game, with Buchner making several appearances in place of Coan. Each threw a touchdown pass in the first half as the Irish took a 17-14 lead to the locker room.

Notre Dame entered the game ranked No. 11 and should move up with losses by No. 6 Michigan, No. 9 Iowa and No. 10 Mississippi.

UP NEXT
North Carolina: Hosts Wake Forest on Saturday in a nonconference meeting of Atlantic Coast Conference schools.