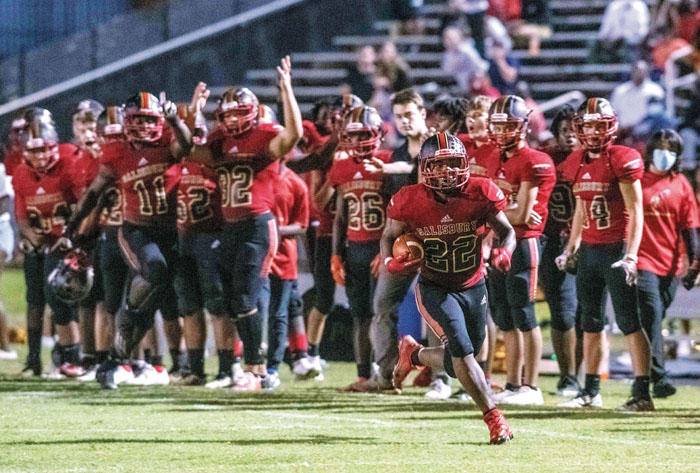 Salisbury High School Savion Freeman runs the ball for a touchdown during a game against East Rowan on Sept. 3. JON C LAKEY / FOR THE SALISBURY POST. 9/3/21, Salisbury,NC.

SALISBURY — Salisbury’s defense scored a safety for a 59-0 lead late in Friday’s game at Lexington, and the Yellow Jackets made their free kick shortly before the clock expired.

Salisbury senior Savion Freeman collected the ball and returned it all the way for the 65-0 final. He really wasn’t supposed to do that. The unbeaten Hornets weren’t looking to rub it on on a winless team.

“I had told the guys not to return the kick back because there wasn’t any need for anyone to take another hit,” Salisbury head coach Brian Hinson explained.

Freeman put his arm around Hinson after the touchdown and apologized for not following orders, but sometimes things happen in the heat of the moment.

They were able to smile about it after the game.

“I saw that kick coming toward me and then I saw this great big hole opening up,” Freeman said. “I knew there was zero chance that I was going to take a hit.”

Freeman, who starts at safety for the Hornets, has basically come out of nowhere.

“I do hear that a lot,” Freeman said. “A lot of people think I must have transferred to Salisbury for this season, must have come from somewhere else. But I’ve always lived here and gone to school here.”

He started on the Salisbury jayvees as a freshman.

“His freshman year he was dunking basketballs and we knew we had something special,” Hinson said. “He’s just really explosive athletically. Next to (Georgia recruit) Jalon Walker, he might be the most explosive kid we’ve got on our team. His numbers in the weight room were climbing when he was a freshman, and he was getting stronger and faster every week. It was a big disappointment for the coaching staff when he didn’t come out his sophomore year.”

Freeman explained that he was recovering from an injury.

Then his junior year was a wash. Chalk a lost season up to the strain the pandemic and remote-learning classes put on student-athletes.

“A lot of kids got their grades messed up by COVID, but this summer he came back to the team and he was eligible and ready to go,” Hinson said. “It was a big bonus. We got a kid back who could really help us and he’s not one we expected to have. Some teams we’ve played have been like, ‘Hey, where did that guy come from?'”

It’s a case of the rich getting richer.

Salisbury, a defending state champion which has won a school-record 15 straight games dating back to last season, has allowed only one TD (to Thomasville) while it still mattered.

There have been six shutouts by Salisbury’s defense in eight games.

“Six!” Freeman exclaimed cheerfully. “Is that how many it is? We’ve shut out so many teams that I lost count.”

Salisbury searched for a while for ways to get Freeman’s speed involved on the offensive side of the ball, but eventually it was decided to let him do his damage on defense and on special teams as a returner.

“And he’s had some more touchdowns called back,” Hinson said. “We don’t always make good decisions with our blocks. When he gets out ahead of people, he’s gone, and we’ve got to realize that.”

Besides Friday’s late TD, Freeman had a 90-yard punt return touchdown against South Rowan and a long fumble return for a TD against East Davidson. Those two didn’t get flagged.

“I’ve had a few big plays, but my main role on the defense is not to let anything get behind me,” Freeman said. “My other job is cleaning things up if our linebackers miss a tackle, but it’s not like there’s been much cleaning up to do. They don’t miss many.”

All three levels of Salisbury’s defense are stout.

It all starts with nose guard Nick Hall, who has proved to be impossible to budge off the line of scrimmage.

“We’ve got to sit Nick down sometimes at practice, so we can get a few things done on offense,” Hinson said with a laugh. “But we always let him play on Fridays.”

It’s a special team. No one doubts that. For the men who coach it and for the young men who play on it, it’s a unique experience.