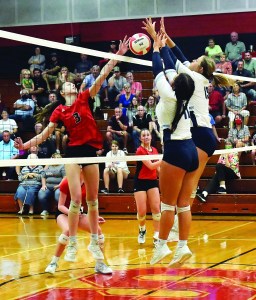 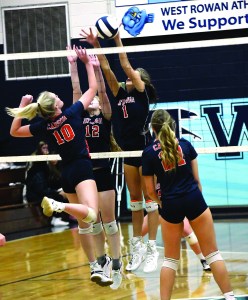 HUNTERSVILLE — South Rowan’s volleyball team swept Lake Norman Charter 25-19, 29-27 and 25-17 on Saturday in the first round of the 3A state playoffs.

The South Piedmont Conference rivals were meeting for the fourth time.

Seeded 15th in the 3A West bracket, Lake Norman Charter  (17-4) won both  regular-season meetings, but 18th-seeded South (17-7) won in last week’s SPC tourney semifinals and won the biggest one on Saturday.

“It wasn’t the best draw for either team, but it worked out for us,” South coach Jenna Horne said. “We played really well, and Cameron Black shined.”

Meredith Faw, one of South’s top hitters, missed the match with illness, but jayvee Laney Beaver stepped into a blocking role on the right side, with Nelson moving from right  to left.

“We know they’re good,” Horne said. “But we’ll just go fight like we always do.”

It wasn’t a complete shock. Parkwood (12-11) was the best 3A team in a split 2A/3A league but wasn’t a standard “1” seed, and Carson coach Kelan Rogers knew his team had a shot.

“We were a little nervous in the first set and almost let them come back,” Rogers said. “But after that, we settled down.”

Rogers said Carson’s kills to errors ratio was plus-19, one of the Cougars’ best efforts of the year.

Grace Goldstein had zero errors for the match and Gianna Patella had a team-high 14 kills. Allie Burns had an exceptional passing game.

‘We weren’t perfect, and we’re not ever going to be, but we were pretty good,” Rogers said.

Carson plays another split-conference team on Tuesday when it travels to West Jefferson to play ninth-seeded Ashe County (7-6).

In the 4A playoffs, Davie  swept South Meck in the first round and will host South Iredell in the 8 vs. 9 matchup on Tuesday.