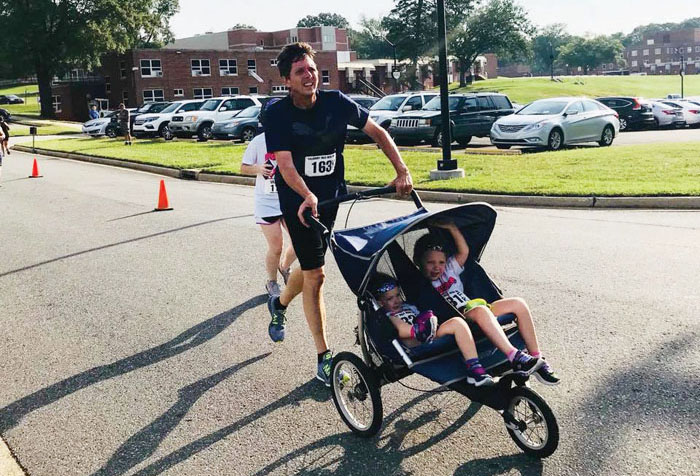 David Whisenant runs with his daughter-in-law Anna and his granddaughters at a VA Heroes 5K. Submitted photo.

Everybody around Salisbury knows David Whisenant. I can’t remember when we met, but it was a long time ago and probably at a race. David is a good runner who often attends the local races. Here are the facts about how he got started and what keeps him running today, more than 40 years after he started.

David began running as a sophomore at Salisbury High. He said, “I really wanted a letter jacket and figured the only sport I had a chance to earn a letter in was track. I ran the 880 and mile and did get my letter with the winged foot symbol in the middle of the S.”

He continued, “I now run 3-4 times a week, 4-5 miles each time. I have a route that goes through my neighborhood, the Salisbury Greenway, the Crescent, Catawba College near the softball field and Newman Park, and back home. I also run the occasional 5K. I run because it’s a nice way to shake off the stresses of the work week, it’s a time to be alone with God, and it gives me a good feeling of accomplishment. I feel guilty if I miss a run, so I’m pretty dedicated to it. I’m not fast, but I’m consistent.”

David’s most memorable race was the International Widow’s Day 5K in June 2013 in London. The race wound through Hyde Park, the largest of four royal parks in London. He said, “I ran by the Diana Memorial, the Serpentine, and other points of history. That was a thrill. When the race was over, I got to speak with Cherie Blair, the wife of the former Prime Minister Tony Blair. It was a charity race, and she was there in support of The Loomba Foundation that sponsored the race. We were in London on vacation, and I just thought it would be fun to try to get a race there. That was one of the highlights of that vacation. I’d love to run another race or two in a foreign country, but no trips are planned right now.”

David’s wife is Jtan, after they met at ASU. They have a son, Kyle, and his wife, Anna. David said, “We’ve been blessed with two granddaughters, Ava, 8, and Maisie, 5. I have a sister, Pam, who lives in Maui with her family.”

Anna runs occasionally, and she joined David for a 5K at the Salisbury VA. He added, “I’ve tried on many occasions to get my wife Jtan to take up running with me, but she always says that the only time anyone will see her running is if she’s being chased!”

David graduated from Salisbury High School in 1979 and from Appalachian State in 1983. Salisbury has always been his home. He said, “I’m a news reporter with WBTV in Charlotte and in my 30th year on the job. I cover local news in Rowan, Cabarrus, Iredell and Mecklenburg counties. My job can be difficult and stressful, but also fun and rewarding. I feel like it’s where God wanted me, and I’m blessed to be able to do it.”

When asked about other interests, David said, “I spend a lot of time at church. I teach Sunday school and am the deacon chairman at First Baptist Church. I also read quite a bit, mainly British history. I follow sports like NASCAR and Formula 1 racing, the Washington Football Team, St. Louis Cardinals baseball, Premier League soccer and of course, App State.”

As for running in the future, David said, “My only running goal is to keep running. I do try to improve my times but I’m realistic enough to know that can only go so far. I just want to be able to keep putting one foot in front of the other at a pace that’s faster than walking.”

Next Sunday is the Rotary’s Spooky Sprint 5K at Catawba College at 2 p.m. Look for it and plenty of other upcoming races at www.salisburyrowanrunners.org.