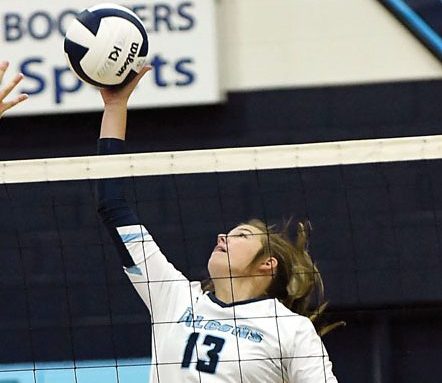 MOUNT ULLA — Emma Clarke was on, and when that happens, West Rowan volleyball climbs to another level.

Not with Clarke, a 6-foot sophomore who also excels in basketball and softball, flying around. She had 16 kills and three blocks.

“Emma is a high-riser, so it’s exciting when she hits and it’s exciting when she blocks, and just the sheer athleticism that she brings to the court is exciting,” West coach Jan Dowling said. “Her energy is unmatched. Now that she’s found some confidence in her offense these last few weeks, she’s making us a stronger team.”

West is 24-2, mostly because of fundamentally sound players who have performed consistently. Noe Gaeta, one of the veterans who is still around from West’s Final Four 2019 team that featured high-flying hitters Tori Hester and KK Dowling, made the sets for Clarke and totaled 44 assists and 11 digs. Libero Brooke Kennerly, a recent Appalachian State softball commit, had 16 digs. Ashlee Ennis, who does a lot of little things, had five kills and 13 digs. Maia Gaeta added eight kills.

Kelcie Love has carried West’s attack in many matches. The senior was solid again with 15 kills and six digs.

“It’s been the Kelcie Love Show for us most of the season, but Emma gave us that dynamic duo tonight,” Dowling said. “Kelcie can do a lot of different things. Sometimes she’ll just pick you apart. Other times she’ll slam it down your throat.”

South (16-7) came into the match off its biggest win of the season in a Tuesday semifinal against Lake Norman Charter (17-3).

But the Raiders couldn’t find the level of execution they maintained against the LNC Knights.

“We had some good swings, got some blocks and came up with great digs, so we had our moments,” South coach Jenna Horne said. “We gave it a fight, but we just weren’t on tonight the way we were on Tuesday. We never got it going. To beat West, every one of our girls has to play their ‘A’ game, and that didn’t happen.”

Playing the Falcons on Senior Night to wrap up the regular season last Thursday, South pushed West to five sets. The Falcons were fortunate to survive.

Even with their student section making the short road trip to Mount Ulla, the Raiders couldn’t replicate that sort of energy level.

“South was a good team tonight, but they didn’t play like they did on their Senior Night,” Love said. “The atmosphere at South was loud, and all their players were riled up. They didn’t have that sort of excitement tonight. Tonight, the home-court advantage was with us.”

In the first set, South peaked with a 9-6 lead, but the slow-starting Falcons caught up at 10-all, and then surged ahead. Love did most of the damage,

A block by Avery Welch gave South a 15-all tie in the second set, but then Love put together another spree, as the Falcons eased away.

Clarke took over from the outset in the third set. Noe Gaeta realized Clarke was on a roll and started feeding her. West pulled ahead by as much as 22-13. South didn’t quit and made it closer, but the Falcons finished off the sweep.

“Coach Dowling has been on me about being more consistent, and I got it into my head that it was time to dominate,” Clark said. “It felt good tonight. We were playing well as a team and we were all pulling together.”

South got nine kills from outside hitter Cameron Black, and she added eight digs. Freshman Meredith Faw had six kills and six digs. Welch, who battled the Falcons in the middle, had five blocks. Liberto Payton Black, who surpassed 2,000 career digs last week, had 12 more. Leah Rymer had 14 assists, while Emma Owens had six assists.

NOTES: West Rowan and Lake Norman Charter will get the two automatic playoff berths for the SPC, but South Rowan is certain to be a wild-card team, and Carson also appears to be a sure thing. East Rowan is on the bubble, but isn’t projected to get in. Pairings will be announced today. The state playoffs start Saturday. West knows it will play at home at noon. … Catawba basketball standout Janiya Downs, who starred in volleyball for the Raiders a few years ago, was in the house. … Also on hand were former South assistant Barry Rymer, now the head coach at Salem College and Kelcie Love’s brother, Austin Love, the former West Rowan and UNC pitcher who made a strong debut after being drafted by the St. Louis Cardinals. … Clarke’s best sport is softball, and there’s no doubt she’ll commit to a national program down the road.