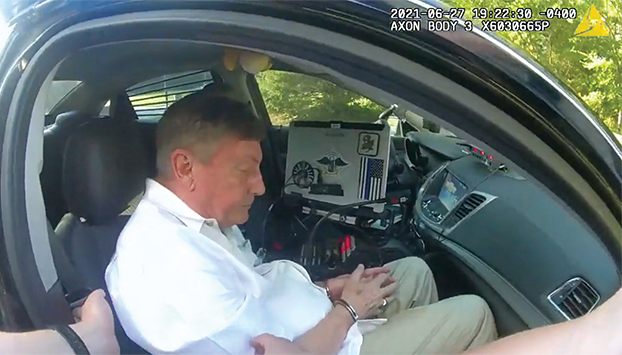 This screenshot of police officer body camera video shows Rowan County Commissioner Craig Pierce being helped into a cruiser in June after being arrested for driving while impaired.

He received a level five offense, which is the least serious of the five levels of misdemeanor driving while intoxicated.

Pierce was sentenced to 60 days in jail, but the sentence is suspended and will instead be served as 24 months of unsupervised probation. He was also given 24 hours of community service that has already been completed. He must complete a substance abuse assessment and surrender his license until it is reinstated by the Department of Motor Vehicles.

Pierce also was charged with failure to maintain lane control, but that charge was dismissed.

Pierce was pulled over by a Salisbury Police officer on June 27, near the intersection of West Innes Street and Statesville Boulevard after a person reported him as a reckless driver. Pierce was accused of driving 50 miles per hour in a 35 miles per hour zone and splitting lanes while having a blood alcohol content more than three times the legal limit of 0.08.

Body camera footage of the incident released in August showed Pierce spewing a series of profanity-laden insults and threatening to use his elected position to have the arresting officers fired. Pierce also said during the arrest he was going to call in political favors to avoid consequences. The footage was released after a petition was filed by The Salisbury Post and WBTV.

Pierce told officers he was driving home from a charity fundraising event at Morgan Ridge Vineyards in Gold Hill where he’d had two glasses of wine. His wife, Melissa, was riding in the front passenger seat of the GMC SUV.

The arrest report indicates that Pierce showed four of six clues on the horizontal gaze test and couldn’t complete other field sobriety tests. At one point in the body camera footage, Pierce appeared to have fallen asleep on the hood of the police car while the officer was administering a test. Pierce had red, glassy eyes, smelled of alcohol and admitted to drinking, according to the report.

Pierce was taken to the Salisbury Police Department, where he took a series of breathalyzer tests, blowing a 0.27 first attempt and a 0.26 on the second.

Initially elected to the board of commissioners in 2012, Pierce won a second and third term in 2016 and 2020. As a commissioner, Pierce is one of five people who make decisions about county government’s budget, hire and fire the county manager and make other policy decisions.

Pierce has not yet addressed the incident publicly, but his fellow county commissioners formed a unified front of forgiveness.