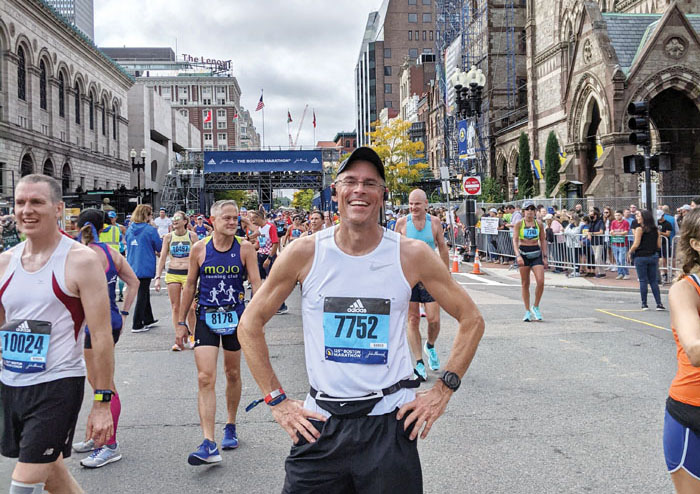 Mark Howard and Katie Boland wanted to take part in the 125th running of the Boston Marathon, America’s most famous footrace, but they were faced with a challenge when organizers of the marathon, the Boston Athletic Association, set an in-person limit of 20,000 participants.

The ceiling left quite a few people running the course someplace else at a time of the runner’s choosing as part of a virtual Boston Marathon. Howard got to go to Boston. Boland ran her event in the streets of Salisbury. This year’s race was held in the fall for the first time, due to a 2020 in-person cancellation and 2021 postponement.

Howard, 54, of Salisbury started thinking about running Boston in 2018 and ran his qualifying marathon at Myrtle Beach in 2020. He credits his wife Ellen, who got him started running, and also the strong support of running groups in southern Rowan and Salisbury. Those groups helped him complete long training runs required to do well in the 26.2 mile distance.

Boland, originally from near Cape Cod in Massachusetts, began running regularly in 2013. Now 33, she ran cross country in high school in hopes of becoming a better swimmer. Boland has been training six days a week in preparation for the virtual marathon. She got to design her own course for the race.

Boston is a challenging course, which has some downhill in the first half and then becomes rolling and uphill toward a flat finish in the downtown area. Howard had to face those hills while Boland’s course intentionally included lots of local hills to mimic the Boston course. While Howard ran the in-person race this past Monday, Patriot’s Day in Boston, Boland had to complete hers by Monday, too.

Lots of COVID rules were in place in Boston. Howard said participants needed to be fully vaccinated or show proof of a negative rapid test before picking up race bibs. But everything ran smoothly.

“The vaccine verification and race bib pickup both went quickly. Masks were required at the race expo and the bus ride,” Howard said.

Different this year also was a rolling start, instead of waves as in the past.

“We got on the bus by bib color which coordinated runners’ arrival in Hopkinton with their pace group,” Howard said. “We could go to the bathroom, then warm up and when ready, we just walked on the course and started the race.”

Early morning drizzle combined with temperatures in the 60s, made for a warm marathon. Howard said a slight headwind felt refreshing due to the humidity.

“The hills got my attention, and my legs were toast early. My previous four marathons were all flat, something Boston is not,” he said.

Howard finished in a time of three hours, 28 minutes and 46 seconds.

Back in Salisbury, Boland did her marathon on Saturday. She had a team of people who supported her, some of whom ran legs of the marathon with her. She was one of 21,000 runners to complete her race on the Virtual Boston Marathon app by Monday afternoon. Boland’s time was five hours and 40 minutes, where she pushed through a Boston Marathon finish tape.

“I am one of those runners who likes hills, so the course and conditions suited me,” she said.

As for what’s next, Boland has some exciting plans. She wants to run all the marathon majors in person, including Boston, Tokyo, New York City, London, Chicago and Berlin.

“Monday’s Boston TV coverage included two people running them all this year. That is inspiring to me,” Boland said.

Howard thanked his running groups, marathon legend Ed Frye for experience and support and Dr. Bobby Levy of Cabarrus Family Medicine, who helped him through several injuries that could have derailed his training.

Boland said she couldn’t have done it without her team of people on the course, some of them her students at Spotlight Dance Company.

Boland wants to be at Boston for the real race next year. Howard wouldn’t rule it out.

After finishing on Monday, he said, “I absolutely could not feel better today!”

They might just see each other next year on Patriot’s Day, April 18, when the race returns to its normal spring date for the first time since 2019.