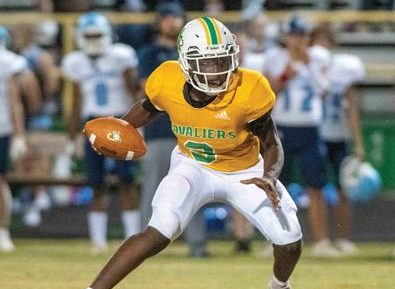 SPENCER — Not many people are aware of it, but the greatest single-game statistical performance ever turned in by a Rowan County high school quarterback occurred six years ago.

It was West Rowan’s Kacey Otto, who reached a plateau — 500 yards of total offense — that had never been seriously challenged.

It was a playoff game with an overtime, so Otto was in there from start to finish.

He was playing for a good team in 2015. West (10-4) had big guys blocking and fast guys running pass routes. Otto was competing on that special night against an opponent motivated enough and good enough to hang with the Falcons, but not quite strong enough to contain Otto. In other words, a perfect storm for stats.

When the smoke cleared, West had edged Carson 28-27. Otto, who accounted for all four West touchdowns, owned 337 passing yards and 167 rushing yards. That’s 504 yards of offense. 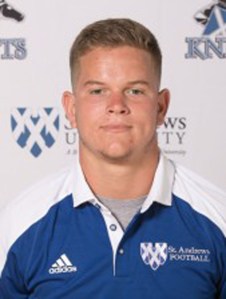 Otto had only one other game in his high school career in which he topped 300 yards of offense — 300-yard games have been somewhat rare in the county — so that 504-yard game was a true outlier.

It’s relevant to speak of Otto and his freakish game because two young quarterbacks have arrived on the scene this year in Rowan County who may have a “500” in their futures.

Salisbury sophomore Mike Geter, in his first year as the starting quarterback, hasn’t had to play full games yet because the talented Hornets have been roasting people, but he has the quickness and arm to do extraordinary things. Geter’s only had one 200-yard passing game so far, but it came against Thomasville, the best opponent Salisbury has seen, and it came on a night when he threw only six passes. Yes, six.

Otto threw 26 passes in his defining game against Carson. What if Geter throws 26 times when the Hornets face someone who can push them? 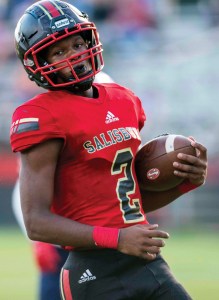 Geter also owns a 100-yard rushing game, and if you’re going to put up a 500, you’ve got to be a serious dual-threat guy. Geter is as dual as it gets.

North Rowan freshman Jeremiah Alford is also making believers. In the 33-32 double-overtime win against East Davidson last week, Alford combined 202 passing yards with 113 rushing yards. That’s an eye-opening blend and an indicator of what might lie ahead.

This was just his sixth varsity game, so he’ll get a lot better. He also has special guys around him — sophomore Jae’mias Morrow (657 rushing yards) and junior Amari McArthur (29 catches, 748 receiving yards). There could be a night when he puts up crazy numbers.

“I said in the preseason that I didn’t know who our quarterback would be, but that was coachspeak,” North head coach Nygel Pearson said with a laugh. “We had another freshman quarterback (Will Klingler) who had a good preseason, but we pretty much knew after our first practice that Jeremiah was the guy. We were going to put the ball in his hands.”

North has done that. Alford (5-foot-8, 180 pounds) has delivered. The Cavaliers have been involved in numerous exciting games, including two victorious overtime thrillers. He’s thrown for 1,129 yards and 11 touchdowns, which is outstanding, but it’s his rushing yards that are improving rapidly. He had negative rushing yards in Week 2 against North Stanly, but he’s topped 100 rushing yards in each of the last two weeks. He’s rushed for nine touchdowns on the season, including three last week.

“Great kid, and I couldn’t ask for a better situation than to have a freshman quarterback like this,” Pearson said. “He’s going to try this best to do whatever you ask him to do. He understands he’s blessed to have the guys we have around him. At the same time, they know that they’re blessed because he can get them the ball.”

Alford is the son of late 1990s North standout Brian Alford. He has been well-schooled as an athlete, a student and a leader.

For a freshman, he’s exceptionally mature.

“I’ve been playing quarterback since I was 6,” Alford said. “The best thing about playing quarterback is that you have a great chance to bond with all your teammates. I think I’ve already grown a lot this season. I know now if I get in trouble on the field, I’ve got teammates I can depend on.”

He had the arm, but he didn’t have to use it often. Mostly, he ran.

Pearson has watched him make major strides over the last month. He’s learned how to cope with the size and speed of varsity defenses.

“In middle school, he could just hit the sideline, and be gone,” Pearson said. “He’s had to learn that in high school you’re not going to take every play all the way. But every week, he’s getting better at learning to take what the defense gives him, to take what’s there, even if it’s just 3 or 4 yards. He’s gotten more patient. He’s comfortable now as a runner, and he’s going to be able to beat some people with his feet as well as his arm.”

Alford took some shots in the early games, but those were more hard lessons learned.

“I’ve gotten wiser about when to use my legs, and I’m not taking as many big hits now,” he said.

Last week’s game with East Davidson turned out to be a grinder. East Davidson played ball control and kept the ball away from North’s offense.

Pearson said East Davidson “sucked the life out of the ball.”

“But we still hung in there and got the win,” he said. “And there are no bad road wins.”

Alford got North (4-2) on the board with his first rushing TD. His touchdown connection to McArthur, the eighth receiving TD of the season for the 6-foot-3 wideout, energized their teammates. Alford’s second ground TD, with just 33 seconds left in the half, helped the Cavaliers get even for the first time at 20-all.

“That was just a play where the pocket collapsed and I had to take off,” Alford said. “Then I saw a running lane open up.”

While he accounted for four touchdowns and hit key pass plays to Amir Alexander and Kemon O’Kelly, as well as McArthur, the young QB already has a firm grasp on the team concept.

He was quick to spread the credit around.