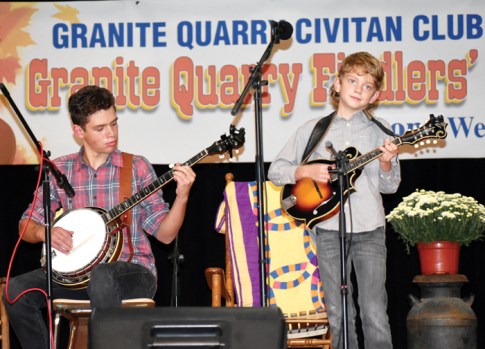 Ayden and Blane Young were contenders in the youth competition at the fiddlers convention. Ben Stansell/Salisbury Post 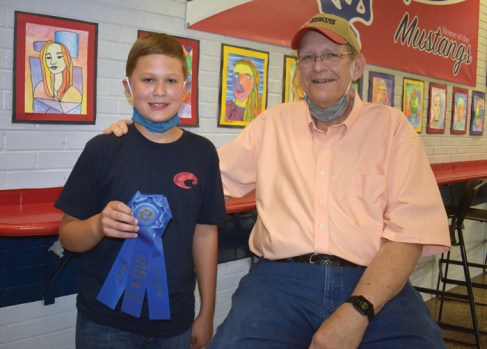 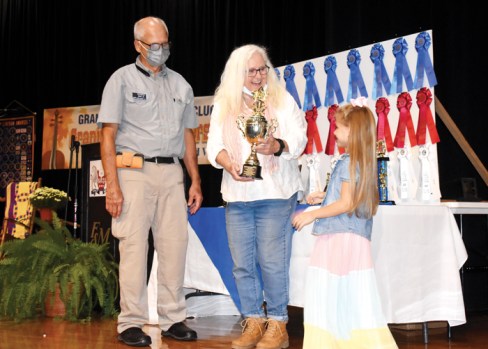 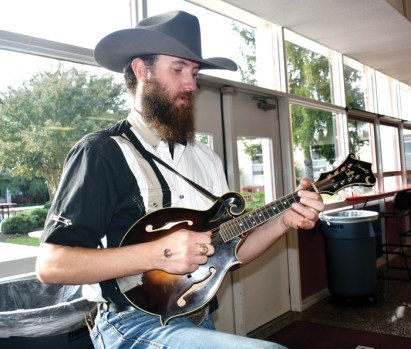 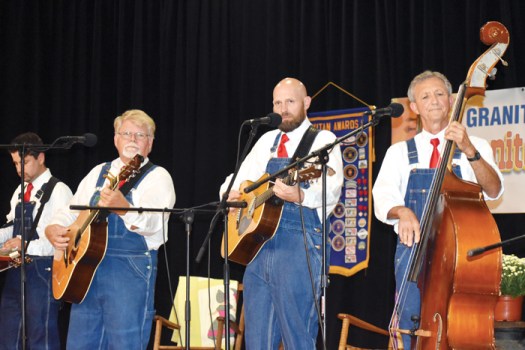 Wearing their tradmark attire, the Gospel Plowboys delivered a tribute performance to David Murph, one of the group's founding members who passed several years ago. The group was one of several to perform at the Granite Quarry Civitan Fiddlers Convention. Ben Stansell/Salisbury Post

GRANITE QUARRY — Steve Kilby doesn’t remember if he attended the first ever Granite Quarry Civitan Fiddlers Convention in 1967, but he hasn’t missed many since.

Originally from North Wilkesboro, Steve began playing guitar at an early age and went on to pick for several well-known bluegrass ensembles. With the help of wife Penny, he started “The Alleghany Music Co.” and taught guitar ever since in various places and for different programs.

Steve and Penny, also a skilled guitarist, have always made an effort to make it to Granite Quarry in October for the convention. They’ve won a few top prizes for their guitar play and have judged a competition as well. The husband and wife duo were honored for their contributions to bluegrass music during the convention on Saturday night.

“I’ve heard some great music on this stage and great musicians playing here,” Steve said. “It’s a big honor just to be in the same place that they were in and the other people who have been honored here.”

The convention was canceled last October due to the pandemic, but it returned to East Rowan High School for its 55th year.

“It’s been great. People are anxious and willing and ready to get back out and play music and perform,” said Vivian Hopkins, convention coordinator. “It’s been really tough on the entertainment industry and it’s been tough on those folks sitting at home with nothing to do.”

The convention is the biggest fundraiser for the Granite Quarry Civitans, helping the club fund a number of charitable endeavors. Along with collecting admission at the door, the Civitans sold more than 400 plates of College Barbecue before dinner even started Saturday.

“We give it all away,” said Lanny Merrell, Granite Quarry Civitan Club president-elect. “We try to raise right at $10,000 a year to give away in the community to all the different causes.”

In the 50 years since it was started, the fiddlers convention has brought some of the region’s top bluegrass talent to Rowan County, including Dolly Parton. Then a newcomer to the country music scene, Parton was the warm-up act for the group of performers who came to entertain the first year.

While there wasn’t a superstar like Parton at this year’s convention, there was no shortage of talented singers, fiddlers, banjo players and guitarists who took the stage in the East Rowan High School auditorium. Dozens of contestants competed in two categories (youth and adult), and there were several special performances tied in with moments of recognition.

Steve and Penny Kilby traveled several hours from their current home in Mouth of Wilson, Virginia, to be at the convention for the first time in a few years.

“It’s a down home atmosphere that this place always has,” Steve said. “It’s always a lot of fun to come here and talk to people, other musicians. It really didn’t seem like a big competition thing, it seemed like a big family reunion of bluegrass musicians.”

This year, Steve brought along 14-year old Gavin Woodruff, one of his star pupils. Woodruff was joined by his grandparents and father and took home first place in the guitar division of the youth competition.

Woodruff, who lives in Alleghany County, has been Steve’s student for about three years and said he was “honored” to be invited to be a part of Steve and Penny’s special night.

Over a dozen contestants participated in the youth competition. The Don and Margaret Livengood Memorial Excellence in Bluegrass Music Award, given to an outstanding youth performer, was won by 7-year old Anna Parker. Parker captured the hearts of the judges by singing an original song with accompaniment from her grandfather.

“She wrote it all out and in 30 maybe 40 minutes we turned it into verses and a chorus and put it to music,” said Randy Whitley, her grandfather. “I didn’t do very much at all, just maybe change the phrasing around and help her a bit.”

After the youth competition finished, a special ceremony was held to recognize the late David Murph, who was a master of several staple bluegrass instruments. Murph was born in Iredell County, lived in Cleveland and formed the bluegrass band the Gospel Plowboys.

The touching tribute to Murph was followed by a performance from the Gospel Plowboys, who took the stage wearing their standard attire — denim overalls, white shirts and red ties.

“We’ve been through a lot in the past several years,” said Michael Jenkins, guitarist and founding member of the Gospel Plowboys. “We lost (Murph) and he was the pillar of the band. To be here tonight in his honor and continue his legacy is a very special thing.”

A full list of the youth competition winners is as follows: