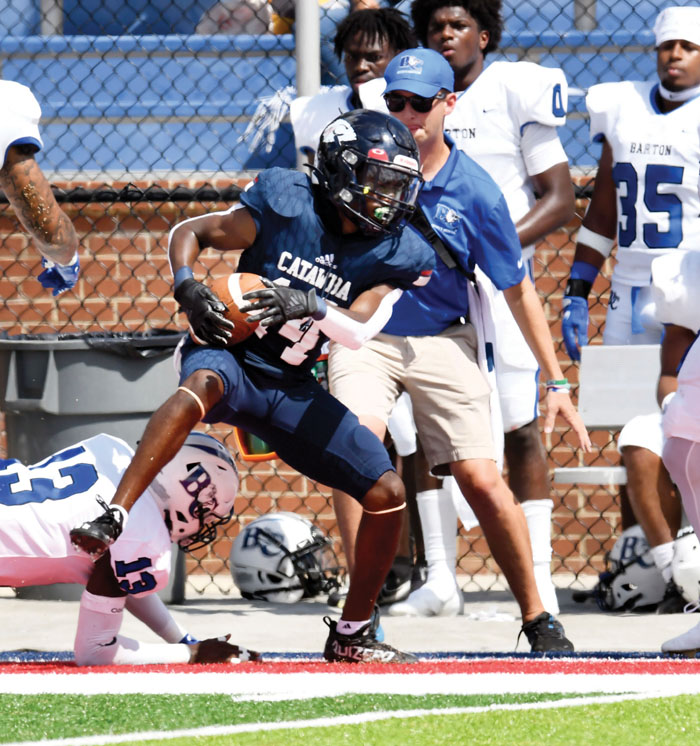 Catawba's Rasheed Singleton makes a sideline catch in the game against Barton. File photo by Wayne HInshaw, for the Salisbury Post

Saturday’s game with Limestone was called off on Tuesday.

Back-to-back postponements with Wingate and Limestone have been due to Catawba adhering to the outlined protocols in the “South Atlantic Conference Return to Play Protocol” for fall sports.

Keep in mind that postponement (to be made up at a later date) and cancellations (won’t be made up) are two different animals. The two postponements more than likely are headed to the cancellation category, as Catawba, Wingate and Limestone have games scheduled every week for the rest of the regular season. There’s no room for a makeup.

When the postponements do turn into official cancellations, that’s going to mean adjustments in the SAC standings for the affected teams.

Even the most optimistic Catawba College football fan wasn’t predicting a victory at Wingate, ranked 10th in Division II, but everyone wanted to see the game played.

Catawba, 3-0 overall and still 0-0 in the South Atlantic Conference, would’ve found out a lot at Wingate and needed to find out those things.  Catawba definitely has gotten better, but how much better, no one knows. Week 5 of the season will go into the books with Catawba yet to play a SAC game or a road game.

On a positive note, Catawba is no longer projected to finish last in the SAC, which is where the Indians were predicted by the league’s coaches to finish in the preseason poll. The latest Massey Ratings place Catawba fifth in the SAC, behind Newberry, Lenoir-Rhyne, Wingate and Tusculum. While the Indians are unbeaten, Catawba is rated as only a middle of the pack SAC team due to strength of schedule.  Catawba has faced the SAC’s weakest slate to this point —  by quite a bit.

Catawba would have been favored to beat Limestone (0-3, 0-1), which played without its starting quarterback and got trampled 45-7 by Barton last week. Limestone is currently rated as the SAC’s weakest team. Starting quarterback Dustin Noller received a concussion in Limestone’s close loss to Tusculum. While Noller, who starred at Mallard Creek High, missed the Barton disaster, he may have been able to return for the Catawba game.

The biggest area of improvement for the Indians since the 1-10 struggles of 2019 has been on the offensive line. Those big guys and the tight ends have transformed the running game.

Quarterback Ken Avent III has directed the offense efficiently and he’s been able to make plays — running or throwing — when he needs to. Catawba’s kicking game has been a strength. A stouter defense has been on the field a lot less than it used to be and has cut down on mistakes.

Carson-Newman has scored only 17 points in three games and is scheduled to play at Barton on Saturday.