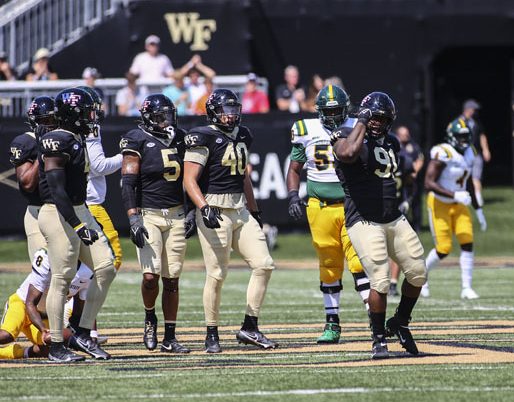 It took less than a month to dramatically change the look of the Atlantic Coast Conference race and likely knock the league out of the national-title hunt.

Six-time reigning league champion and 25th-ranked Clemson has an early league loss against one of its top division challengers and two losses overall. North Carolina and Miami have gone from preseason top-15 teams to unranked.

That leaves No. 23 North Carolina State and No. 24 Wake Forest as the league’s highest-ranked teams. The race for the league title hasn’t been this wide open in the better part of a decade.

“You can’t approach these games thinking one team’s automatically better than the others,”

Syracuse defensive end Josh Black said. “Whoever’s playing best this game is going to win. That’s why I think this year is so cool: there’s no top-front runner.”

Then again, while it adds drama, it has likely ended the league’s chances of returning to the College Football Playoff. The ACC has earned one of the four spots in every edition, first by Florida State as a reigning national champion in 2014 followed by Clemson each year since — with the Tigers claiming two national championships.

“It’s not great for the ACC,” Black said. ‘Obviously you want somebody from the ACC to represent your conference in the final four. But you never know how things are going to shake out this year. … Maybe as a whole in the country, it could be just a whole shaked-up year.”

It certainly is in the ACC, anyway.

From 2015-20, Clemson went 52-3 against ACC opponents, including splitting two games last year with Notre Dame when the Fighting Irish gave up their football independence for a season due to the COVID-19 pandemic. And before Saturday, Clemson had gone nearly four years since losing to one of the league’s every-year members (at Syracuse in October 2017 ).

Picked to win the league again, Dabo Swinney’s Tigers (2-2, 1-1 ACC) have instead struggled mightily on offense with the departures of Trevor Lawrence and Travis Etienne to the NFL. They lost their opener against No. 2 Georgia, struggled to beat unranked Georgia Tech then lost last weekend in double overtime at N.C. State, snapping their streak of 97 straight weeks in the top 10 of the AP Top 25.

“My job right now is to teach and grow this group up to what they’re capable of being,” Swinney said after last weekend’s loss. “We had a 2-3 team (in 2009) that went on and played for this league championship. … All we can do is focus on what we can control.”

While the Coastal Division remains in its annually unpredictable form, five Atlantic Division teams – N.C. State, Wake Forest, Boston College, Louisville and Syracuse — now control their own destiny in dethroning the Tigers. Each plays at least twice against other teams from that group in October.
BC (4-0) is next to face Clemson, visiting Death Valley on Saturday night in its ACC opener. Syracuse (3-1) hosts the Tigers on Oct. 15.

The Clemson win cleared a major hurdle for the Wolfpack (3-1, 1-0), picked in preseason as the Tigers’ top division challenger. It marked N.C. State’s first win against the Tigers since 2011 and gives the Wolfpack the head-to-head tiebreaker.

“We also know when you win a game like Clemson, that you’re on somebody’s schedule a little differently,” Wolfpack coach Dave Doeren said. “You’re going to get their best. So we know that. When we play a ranked team, it’s different. … You earn that respect through winning those games, and you get people’s best, and you’ve got to make sure you give them yours.”

The Demon Deacons (4-0, 2-0) are the only league team to win multiple ACC games in September after last week’s win at Virginia. They host the Cardinals (3-1, 1-0) on Saturday then visit Syracuse, but their division schedule is backloaded; they close the regular season against N.C. State, Clemson and Boston College in a stretch that could determine who plays in the ACC championship game in Charlotte on Dec. 4.

“You start a season with all these goals and all these things you want to accomplish,” Wake Forest coach Dave Clawson said. “And the only way you’ll end up accomplishing them is if you take care of your own business. We don’t talk about (the Clemson loss) at all.”

Chuba Hubbard stepping in for McCaffrey as Panthers face…