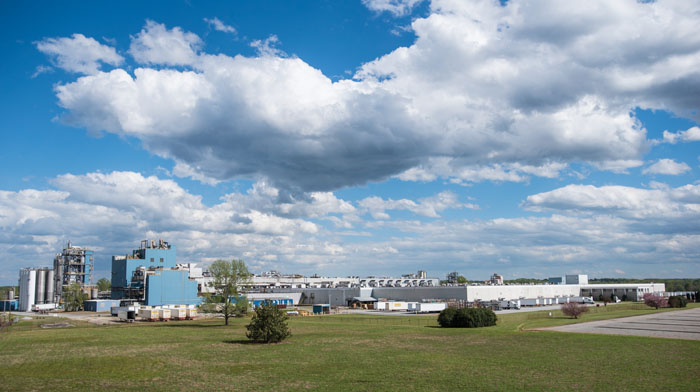 “It’s been looked at by quite a few companies over the past few years,” said Scott Shelton, vice president of the Rowan Economic Development Council. “When we get requests to look at buildings in Rowan County, it’s usually one of the top three to five most frequently submitted.”

While the 1 million square foot building at the Statesville Boulevard site remains vacant, Shelton said he is confident that it will be home to transformative economic development sooner rather than later.

“I think it’s just a matter of time before it clicks,” Shelton said.

His belief in the potential of the industrial park was reinforced during a presentation delivered by representatives from national site selection firm Global Location Services, Duke Energy and the North Carolina-based engineering firm WithersRavenel. Those representatives gathered in Salisbury earlier this month to unveil the findings of a study they conducted on the Mid-South Industrial Park.

“To me, one of the biggest takeaways was just the affirmation from a professional site selection consulting firm that this is a very desirable property for a lot of the same factors that we’ve used to promote the property in the past,” Shelton said.

The study was completed as a part of Duke Energy’s Site Readiness Program, which seeks to enhance the readiness of sites for business and industrial development.

The Mid-South Industrial Park Site is one of two Rowan County properties included in Duke’s program this year. The other is the former N.C. Finishing Company site at 2555 N. U.S. 29. The Finishing Company site features 176 total acres along the shores of the Yadkin River, adjacent to I-85 and intersected by rail.

A modified study on the Finishing Company site was conducted by Duke Energy and WithersRavenel. The results of that study will be presented to the Spencer Board of Aldermen at its meeting on Oct. 12.

The Mid-South Industrial Park is located at 7401 Statesville Blvd. and is known more commonly as the former Celanese or DuraFiber facility. The facility’s storied history, Shelton said, is one reason why the Rowan EDC is so keen on facilitating its development.

“This facility employed a lot of people for many years in the county,” Shelton said. “It’s a source of pride and we’d like to see it redeveloped.”

The 537-acre industrial park is dominated by a roughly 1 million-square-foot building with ceilings reaching more than 30 feet high. Several parking lots, accessory buildings and wooded areas are on the site as well. The industrial park is owned by Salisbury Investments I LLC. Eastern Fence recently located a manufacturing and distribution center in a 65,000-square-foot accessory building at the park.

DiDi Caldwell, president and founding principal of Global Location Strategies, said the Mid-South Industrial Park has numerous qualities that might make it attractive to a manufacturing company.

“I think what we found there, which was in our report, is that the site has some very unique characteristics that are difficult to find in one location — a large piece of property with strong, robust utilities such as electricity, natural gas, water, wastewater, rail, access to highway, proximity to a large workforce,” Caldwell said. “Those are all things that are difficult to find and we think that represents a unique opportunity for that region to attract a large capital intensive, resource intensive facility.”

Another advantage, Caldwell said, is the site’s proximity to the Charlotte Douglas International Airport. That could be an attractive quality to European executives who would appreciate only having to take a direct flight and short drive to reach the site.

The development of the industrial park as a manufacturing center would likely bring tax revenue and high paying jobs to Rowan County, Caldwell said. She said the Mid-South Industrial Park reminds her of the former MillerCoors plant in Eden that was converted into a pet food manufacturing facility by Purina.

While the study indicated the strengths of the site, it also indicated steps the Rowan EDC can take to better prepare it for development.

The top priority, according to GLS, is for the site’s owners to finalize a Brownfield Agreement with the North Carolina Department of Environmental Quality. A brownfield is a previously developed property not currently in use that could be contaminated from prior activities. The Brownfield Agreement, Shelton said, would release a new developer from any potential contamination liabilities.

Other action items included in the report are taking inventory of utility assets to highlight available equipment, developing a demolition plan for clearing portions of the existing building and conducting further studies on the site’s wetlands and natural environment. Shelton said following up on those action items could help the Rowan EDC provide potential investors with more accurate and detailed information about the industrial park.

RSS Board of Education appoints Marsh to fill vacant…