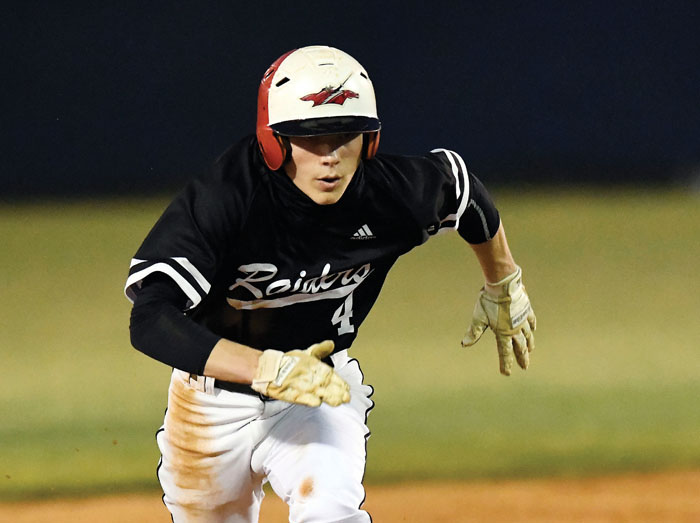 South’s Kane Kepley will continue his baseball career at Liberty University after his time with the Raiders. File photo by Wayne Hinshaw, for the Salisbury Post

LANDIS — South Rowan senior Kane Kepley, a Liberty University commit, is listed at 5-foot-8, 160 pounds, and even those modest dimensions are probably optimistic.

For a player of his stature to receiver a Division I scholarship offer is unsual, but Liberty didn’t get to be a college baseball power without thinking outside the box.

Liberty head coach Scott Jackson wasn’t looking for a center fielder to hit the ball out of the stadium. What he was looking for was someone who can catch everything that doesn’t leave the stadium.

And when it comes to defense in center field, Kepley is about as good as anyone has ever been.

“I’ve had a chance to coach quite a few really good center fielders,” South head coach Thad Chrismon said. “Kane might be the best of all of them.”

Catawba fans will remember how much ground Blake Houston covered at Newman Park for the Indians, and Patrick Atwell helped Belmont Abbey get to a D-II World Series. That’s just naming two of Kepley’s predecessors. That gives you an idea of how good Kepley is with a glove.

“A lot of times it’s all about projectability and physicality and size for the Division I schools, and Kane is not one of those guys that you can just come watch him hit once in BP and know he’s a Division I player,” Chrismon said. “He’s a kid that you’ve got to watch play several games. If you watch him play a few games, you’ll see him make some plays that you don’t expect a guy to make.”

Even in practice, Kepley won’t let anything fall. Teammates line balls into the gaps. Kepley doesn’t mind robbing his teammates. Potential doubles and triples are outs.

While defense is his gift, it’s not like Kepley can’t hit.

He was constantly on base during the Raiders’ strong 2021 season that included a Central Carolina Conference Tournament championship, two playoff victories and a 14-4 record. He had a .431 batting average and .527 on-base percentage. There wasn’t a ton of power there, but his blazing speed shows up on offense as well as defense. He scored 23 runs and stole 16 bases even in a drastically shortened season.

Kepley isn’t a household name yet, mostly because of COVID. He played most of his freshman year on South’s jayvees, but went 7-for-21 when he moved up to the varsity and had nine RBIs.

He was a varsity starter as a sophomore and was off to a nice start, but COVID crushed that season after the Raiders had played five games. Then his junior season, as solid as it was, was shortened by the pandemic. It also was played mostly against Davidson County schools.

Kepley is going to be a lot more high-profile this spring and could be a player of the year candidate. South’s move up to 3A means two league games each against East Rowan, Carson and West Rowan. Those are marquee matchups every Rowan baseball fan can get excited about.

“All those trips to Davidson County did get old,” Kepley said. “All of us are excited about being in a league with mostly Rowan and Cabarrus teams, playing closer to home and against more guys we know. We’ve got a group of guys that have played together since we were in Cal Ripken League and we know we can be as good as anyone. We always expect to win.”

As fast as he is, recruiting was moving at a snail’s pace for Kepley through his junior season.

“It was tough to get recruited during COVID,” Kepley said. “Coaches couldn’t see us like they normally could. I wasn’t getting many looks. I made out a list of schools and contacted them. Liberty was on my list.”

The State Games last June helped college coaches see what Kepley could do in a highly competitive tournament atmosphere. Kepley and South’s double-play combination of Nathan Chrismon and Ty Hubbard provided the up-the-middle defense for an undefeated Gold-medal winning team.

“The State Games were great exposure for Kane,” Coach Chrismon said. ” I knew they would be. One of the coaches who watched him play and talked to me about him at the State Games was Coach Jackson at Liberty. The State Games helped put him on the radar for schools. They weren’t just seeing a snapshot of him. They got to see him play several times.”

Jackson, a former UNC assistant and recruiting coordinator, coached Liberty to 41 wins and a 19-2 record in the Atlantic Sun Conference last season. Liberty was involved in NCAA regional play and is a perennial contender.

After the State Games, Kepley started hearing from a number of schools, mostly D-IIs, but Liberty also got involved and the Flames quickly moved to the top of his list.

A visit to Lynchburg, Va., and a tour of the Liberty campus convinced Kepley that the school and the baseball program were right for him. It’s a baseball program that appreciates the assets he brings to the table.

“When he visited, Liberty got a feel for who Kane is and what he’s all about,” Chrismon said. “He’s super competitive, he grinds, and he goes about things the right way. Every day someone tells me that they’re so happy for him because no one works harder and no one deserves an opportunity more.”

Kepley stays busy playing in tournaments for the Matthews-based Showcase Baseball Academy. He’s traveled throughout the Southeast and has held his own against major prospects.

“My hitting is something that I’m constantly working on,” Kepley said. “But as far as defense, as far as being in the field, I’m confident that I can compete with anyone. I’m confident in my speed and I always believe I can get to every ball.”