Kristy Woodson Harvey: In life — and in tennis — sometimes love means everything 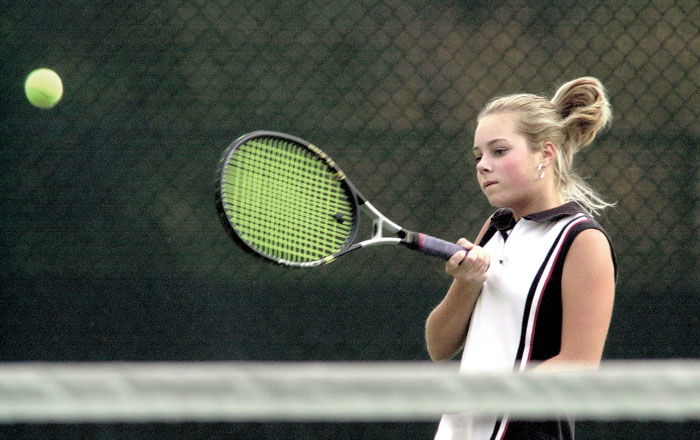 Post file photo by Jon C. Lakey — Kristy Woodson Harvey, in her Salisbury High playing days, found that ‘everything I needed to know, I learned on those tennis courts. When I really, really wanted something, it might take a while, but if I worked hard enough, I could get it.’

Never fall in love with a Hornet tennis player because love means nothing to us. My 10-year-old self dreamed of wearing a long-sleeved T-shirt with those words — words reserved for Salisbury High School tennis players — emblazoned on the back.

Because, growing up, the girls’ tennis team wasn’t good; they were champions. From childhood, I watched those girls in match after match, dreaming of a day when I might grace their courts in my own sporty tennis dress, high ponytail, and big hoop earrings.

Fast forward, and after years of clinics and matches, weekend tournaments and holiday camps, Coach Bill Lee and Coach Chris Myers had graced me with a top six as a freshman, something I could only have imagined in my wildest dreams. My first match against Lexington, our biggest conference rival, was a monumental one. Not only were they right up the road and fellow stinging insects — Yellow Jackets — but they were a team like ours, a team so deep that the entire top 6 could get mono and another six could fill in like it was nothing.

That night, we celebrated our 100th straight conference win — and I truly realized that I was a part of something bigger than myself, something that had come before me and would continue long after I was gone.

It was a feeling that never left me, one that propelled me more than ever my senior year when I played number one. I was the captain. The baton had been passed–and the pressure to keep the winning streak alive was all on me. Only now, pressure was something I was used to, something I could fight through. The first few matches were uneventful wins. Then on September 30, 2002, our rival Lexington team was stronger than they had ever been. In preparation for that match, I gathered my girls on Sunday afternoon for an extra practice and a lot of good, old fashioned getting pumped up. We were made for this; we were going to win.

Our No. 2 player and I were the only ones to win our singles matches, but we could sweep three doubles matches, no problem. We won on courts one and two. But my teammates walking off court three is stamped in my memory. They lost in a nail-biting tiebreaker — one of five our team played that day.

There were a lot of tears shed that night, but none of them by me. It was my job — a job I had watched three girls do before me — to be the leader, my job to remind my team that we won together, and we lost together. But inside, I was dying. I had worked my entire young life to be where I was then. And I was the captain that broke the streak. It was my team that lost that 127th conference match in a row. That was going to be my legacy.

I’m all grown up now, and, well, I don’t worry a lot about my high school tennis career. But a few months ago, I got a text from a friend in Salisbury to look at the front page of the sports section. Suffice it to say, it had been a while since I had been in the sports section.

What I saw was an article about the Salisbury High School girls’ tennis team’s 170th conference win. And this line, by reporter Mike London, caught my eye: two days after those tiebreakers turned into heartbreakers against Lexington, on Oct. 2, 2002, Woodson, Allison Somers and their teammates started a new Central Carolina Conference winning streak against a stout Ledford team. That streak is still going, handed down, racket by racket, for almost a generation.

A generation. I was so proud I almost forgot to feel unspeakably old.

That article made me realize something I’d never considered: Everything I needed to know, I learned on those tennis courts. When I really, really wanted something, it might take a while, but if I worked hard enough, I could get it. Pressure and stress would always be real, but if I could learn to be my best in spite of them, I could fight through them. When an agent or publisher rejected me, I knew I would try again. When I didn’t get a contract I wanted, when a favorite editor moved to another publishing house, I was still going to keep fighting for my spot. Because, as Mike London, a reporter I had worked with in my high school days, showed me, it isn’t the losses that count. It’s what we do after that matters.

All those years ago, on those courts, as defeated as I had ever been, I felt like something was over. And what I know now is that my ending wasn’t an ending at all. It was a new beginning. If I had been the captain that kept the streak alive, no one would be talking about it in the sports section years later.

And now there is another fourteen-year-old girl on a Salisbury High School court who will probably get to win a 200th straight conference match because on October 2, 2002, six high schoolers quit pouting, tightened their ponytails, and beat Ledford.

The next day we wore those Hornet t-shirts to school proudly again. But I think what that loss taught us is that it might sound cool to say that love means nothing. But when it comes to sport, to passion, to friendship and camaraderie, maybe that isn’t exactly true. All those hot summer afternoons we spent preparing for a new season, the long hours of bus rides where we shared secrets and laughed until our stomachs hurt, the way a group of girls cheered each other on and stuck together no matter what… Well, I have to think that was love, maybe some of the truest we’ll ever know. And, no matter what those shirts said, it meant everything.