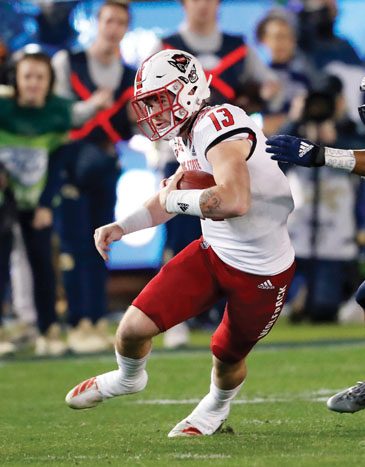 RALEIGH (AP) — Devin Leary threw for three touchdowns and ran for another as North Carolina State geared up for a key Atlantic Coast Conference clash by beating Furman 45-7 on Saturday night.

Zonovan Knight ran for 104 yards and a touchdown on 11 first-half carries for the Wolfpack (2-1), which braces for a visit from Clemson to open its league schedule next week.

It was a strong bounce-back performance for NC State after dropping a road decision to Mississippi State a week earlier.

Knight scored on a 1-yard run to open the scoring, churning out 56 rushing yards of the 69 yards on the eight-play drive.

Leary’s touchdown passes went to Dylan Parham for 4 yards, Anthony Smith for 42 yards and Thayer Thomas for 12 yards – all in the Wolfpack’s 28-point second quarter. He also ran for a 7-yard scoring during the quarter.

Furman (2-1) had one first down in the first half, with 49 yards of total offense. The Paladins’ best scoring chance of the half came after recovering a fumble on N.C. State’s first possession, but Timmy Bleekrode missed on a 48-yard field-goal attempt.

Furman quarterback Hamp Sisson finished 8-for-19 for 86 yards with a touchdown toss and an interception.

Furman: The Paladins had been 2-0 for the first time since 2014, but they were saddled with their sixth consecutive loss against a Football Bowl Subdivision opponent. The Wolfpack has pinned two of those defeats on Furman.

N.C. State: The Wolfpack seemed well-recovered on defense after losing linebacker Payton Wilson and safety Cyrus Fagan, both starters, to season-ending injuries a week earlier. The Wolfpack has yielded a total of seven points in two home games this year. Furman was 0-for-7 on third-down conversions in the first half.

Furman: Home vs. Mercer on Saturday to open Southern Conference play.
N.C. State: Home vs. Clemson on Saturday in its ACC opener.