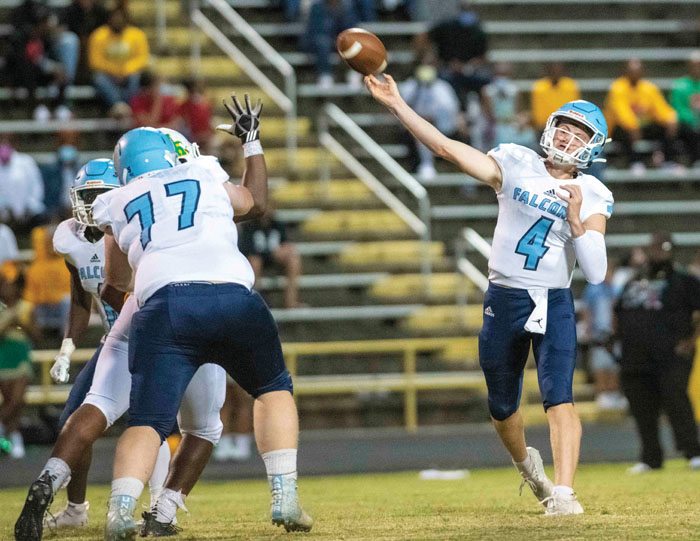 MOUNT ULLA — It was a football game that lived up to the hype as well as the scouting report — a pass-heavy shootout between the county’s two air-it-out teams.

“We felt very confident going into it, even though we knew North had some guys,” West head coach Louis Kraft said. “But then we don’t tackle people very well, they come back from 21-0, and it turns into a dadgum boat race. They’ve got great athletes. Give credit to North’s coaches and to North’s freshman QB. You can’t rattle that kid.”

“We had a little luck on the shovel pass, and I was happy to finally get a few rushing yards,” Loeblein said. “After Davie and Mooresville, I didn’t have any rushing yards coming in. From my perspective, we’ve played the county’s toughest schedule.”

Loeblein’s feat of passing, rushing and receiving touchdowns in the same game was unusual. Jon Crucitti was the last one to do that in a game for the Falcons in the 69-0 romp against East Rowan in 2008. Crucitti had a short scoring run, reeled in a scoring pass from B.J. Sherrill and tossed a TD pass to Brantley Horton.

Obviously, the receiving TD is the most challenging part of that trifecta for a QB.

“We put that shovel play in three or four weeks ago, and I told the guys that the next time we were down there in position to use it, we were going to try it,” Kraft said. “They went out and executed. It’s always beautiful when a plan comes together.”

Loeblein became West’s starting quarterback as a sophomore. Even with a COVID-shortened junior season, he’s amassing nice career numbers. He surpassed 3,000 career passing yards in the North game. He’s now at 3,116. He’s the 24th QB in county history to reach 3,000 and the seventh Falcon to do so. B.J. Sherrill, Payne Stolsworth, Timmy Hogue, Bryan Aycoth, Kacey Otto and Jared Barnette are the other Falcons who made it to 3,000, so that’s pretty good company to be in. There are a lot of county players of the year and athletes of the year on that list.

Kraft said Otto is the player Loeblein most reminds him of, and Loeblein should move past Otto (3,148 passing yards) on the career list on Friday when the Falcons play their South Piedmont Conference opener at Carson.

While yards are fun, touchdowns are even more meaningful. Loeblein has 34 career TD passes and is headed for a place in the county’s all-time top 10.

“In a year when the rest of the county has new quarterbacks, it’s huge for us to have a veteran, three-year starter,” Kraft said. “It feels like we’ve had Noah for 10 years. He’s been around so long he understands my body language and he even understands my grunts. We totally expected a big season from him. He’s delivering on it.”

Loeblein leads the county with 38 completions and 670 passing yards  He has six touchdown passes, one less than Alford.

Loeblein has different targets this year. Damon Phillippe and Andrew Kennerly accounted for most of West’s receptions in the spring season. This year it’s Peter Williams-Simpson, who has a county-leading 20 receptions, and Fesperman, who is third in the county with 11 catches.

“Things really started to click with Fesperman in the North game,” Loeblein said. “He was finding the open spots.”

Loeblein’s role as a leader for the Falcons is at least as important as his role as a passer and runner.

“He’s got all the right qualities,” Kraft said. “He’s one of those kids that everyone in the school gravitates to and wants to be around. In basketball, he was a reserve last season, but he became the leader of those reserves.”

Loeblein also is a fine catcher and occasional outfielder for West’s baseball team, so he’s a year-round Falcon. As a competitor, he enjoys the challenge of playing all three sports. He’s still managed to stay on top of his school work. He makes A’s and B’s.

Outside the classroom, his maturity comes in handy, especially in situations like Friday night.

When North Rowan came storming back from a 21-0 deficit to put the heat on the Falcons, Loeblein (6-feet, 185 pounds) was a tower of strength.

“I kept telling our guys to stay composed,” Loeblein said. “Stay composed and execute. We did and we got out of there with the win.”

Kraft believes Loeblein has what it takes to play football at the small-college level, although Loeblein may opt to be a normal student at a larger school.

That’s still to be determined.

“I think he’s still figuring it all out,” Kraft said. “But he’s got the work ethic and all the intangibles.  I think he’ll get some opportunities.”