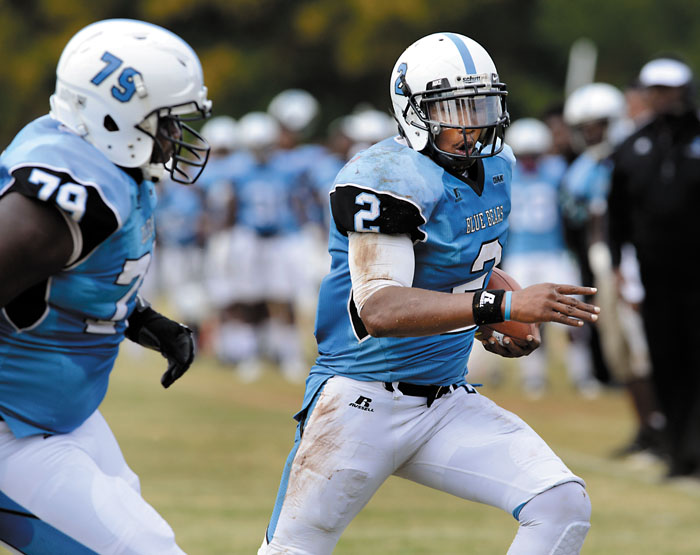 Powell has been the league’s dominant offensive player in his second season with the Rattlers and leads the league in rushing touchdowns and rushing yards.

Powell broke 11 school records and four CIAA records while he was at Livingstone.

COLLEGE FOOTBALL
Catawba’s Clayton Crile is the SAC Special Teams Player of the Week. Crile was perfect on his kicks on Saturday, going 3-for-3 on field goals, including a 43-yard go-ahead boot in the fourth quarter of  37-27 win against Erskine. He added field goals of 31 and 25 yards, while going 4-for-4 on extra points.  Crile averaged 48.5 yards on four punts.

Dunn, a freshman who played in high school at Cox Mill, scored four goals in two wins and had one assist.

Former Catawba star Zac Almond has had an incredible season for the Missoula Paddleheads.

Salisbury won 5-0 over the South Rowan Raiders on Tuesday in a non-conference match.
Brayan Avilez  and Will Webb scored two goals each for the Hornets (6-1), while David Austin had one. It was the first career goal for Austin, a freshman.
Assists were credited to Colin Donaldson (2), Avilez (2) and Joseph Hernandez.
Wade Robins and Webb combined for the shutout for the Hornets.
Salisbury got excellent play from Hines Busby, Carlos Henrique and Jack Heilig in his varsity debut.
Salisbury opens up Central Carolina Conference play at home tonight against Thomasville. Game time is 6 p.m.
HS GIRLS GOLF
Lake Norman Charter shot 118 to win a South Piedmont Conference match Tuesday at McCanless.
East Rowan finished second at 127. East’s Hannah Waddell shot 36 and was medalist. Emma Callahan shot 43, while Emma Cornelison and Addison Queen shot 48s.
McKinley Faw shot 50 to lead South Rowan.

Salisbury has won every match 9-0.

Salisbury returned to action and defeated South Davidson 25-11, 30-28 and 25-21 in a Central Carolina Conference match on Tuesday.

Nine eagles were made.