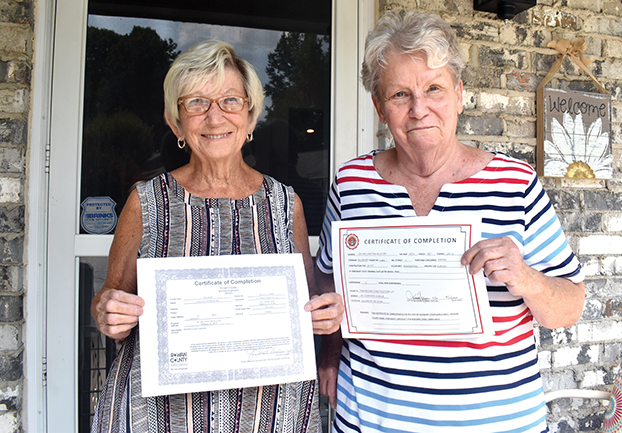 Peggy Ricke and Brenda Goins hold up certificates showing the completion of renovations on their condos. Nearly a year after a flood forced them from their homes in Wellington Hills, the two moved back in last month. Ben Stansell/Salisbury Post

SALISBURY — Lying on a twin mattress on the floor of her bedroom, Peggy Ricke on Aug. 6 slept in her home for the first time in almost a year.

Ricke arrived at her Wellington Hills neighborhood earlier that day with her car packed with a few belongings. She was there to finally pick up the key to her condo, which had been gutted and renovated in the previous 11 months.

“The day they gave us the key, I came out screaming, ‘Thank you Jesus, we’re back home,'” Ricke said. “I was screaming and I was crying. The neighbors who were home all heard me. All I could do was cry. It was so wonderful to have a key and to be home again.”

Ricke’s condo was one of five in building 200 inundated with water during a devastating flood on Aug. 31, 2020. Wellington Hills is located off of Jake Alexander Boulevard, near Sacred Heart Catholic Church and Isenberg Elementary.

Although Ricke was out of town on the day of the disaster, several of her neighbors were home when the water started to infiltrate their condos. They had to be rescued via boat by emergency responders. Their homes and many belongings inside of them were ruined during the deluge. For the previous year, residents of building 200 have been forced to live with friends, family members or pay rent at other apartments as their homes have undergone extensive renovations.

When Ricke came to pick up her key last month, she didn’t have a bed frame, but that didn’t matter. She decided she was going to spend the night in her unfurnished condo.

The flood that struck on Aug. 31 was unexpected, but it wasn’t altogether surprising. With a sloping driveway on the front side and Jump and Run Branch Creek to its back, the five connected condos are at the bottom of a fish bowl. According to the Federal Emergency Management Agency’s flood map of Salisbury, building 200 in Wellington Hills lies within a 100-year flood zone. When the building was originally built in the 1980s, that wasn’t the case. But it was reclassified after a 1993 survey.

During heavy rains prior to the flood, residents saw water encroach on their homes. It never entered, however, until last year when they experienced a rain event that exceeded the 100-year rainfall totals. That doesn’t mean that the amount of rainfall received on that day only happens once every 100 years. It means that there is always a 1% chance that a certain amount of rain will fall in a particular location over a set amount of time in a given year.

Before the water entered their homes, it carried away several of their cars. Brenda Goins, who lives on the end of the building and next to Ricke, watched as her beloved Toyota 4Runner was swept to the side of the building by the powerful current. One car, belonging to Mike and Judy Barnhardt, was carried away and buried under sediment in the creek, not to be found for several days.

After forcibly moving their cars, the water lapsed into their homes and ruined furniture, appliances, photos and the HVAC units located under the floorboards. The day after the flood, representatives from city and county governments visited the homes and deemed them uninhabitable. The Wellington Hills Homeowners Association, led by property supervisor Gail Mintz, worked with its insurance company to assess the damage and initiative the renovation process. Salisbury-based Tom Wilson Construction was contracted to complete the repairs.

Before any physical work could be done on the condos, construction crews had to wait several months for them to completely dry out.

Once work started, the pandemic complicated the process further.

Construction workers replaced and elevated the heating and cooling systems in the condos. To gain compliance with the city’s standards, more flood vents were installed in the building’s foundation. A common flood mitigation technique found in homes along the coast, flood vents allow water to flow directly under the homes instead of welling up against the side, building fluid pressure. The flood vents will come in handy should another downpour force an exceptional amount of water toward the condos. 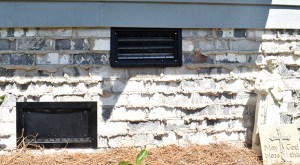 More flood vents (bottom left) have been installed next to air vents along the foundation of building 200. The flood vents are designed to allow water to flow quickly under the building so that it does not build up. Ben Stansell/Salisbury Post

Other renovations to the condos included the installation of new appliances, flooring, countertops and cabinetry. Residents were given the option to replace one of their bathtubs with a walk-in shower. Ricke said she is particularly appreciative of that opportunity.

The condos are in better condition now, Ricke said, than they were before the flood. That didn’t come without much hardship. In addition to having to make other living arrangements for almost a full calendar year, residents of building 200 had to pay out-of-pocket for the belongings lost in the flood. Several had to pay, at least in part, for new vehicles.

The renovation process was officially complete on Aug. 6 when the city of Salisbury and Rowan County issued certificates of completion for building code compliance. The project was finished 11 months and six days after the flood.

Ricke might have been the first to move in, but other residents soon followed.

Goins moved in a few days after Ricke and is still in the process of unpacking the dozens of cardboard boxes that have stored her belongings for 11 months. Those boxes were hastily packed by her family following the flood and may take some time to go through. Byron Mintz, who is Gail’s son and lives on the other side of Ricke, has returned. So have Judy and Mike Barnhardt.

Michele Joy, who was there on the day of the flood, is the only resident who has not yet returned. Joy said she is waiting for several adjustments to be made to her condo, and is generally still undecided about moving back.

Residents who have returned have been happily received by their neighbors.

“One neighbor so far has brought a meal to all of us,” Ricke said. “Another neighbor bought all of us outside decorative lights. We had them before and everybody told us it was so dark and dreary down here without us and they’re so glad we’re home.”

Although Ricke and Goins said they are happy to be home, they still harbor fears over what another heavy rain could bring. Ricke and Goins both said they looked into buying individual flood insurance, but the high cost of the policy was prohibitive.

Instead, Ricke said she has decided to invest less in new furniture.

When a thunderstorm brought heavy rain down one night last month, Ricke watched anxiously out of her front window. She got a call from Byron, who was doing the same thing.

“He called me that night when it was raining so hard and he said ‘So, what do you think?’ ” Ricke said. “I told him, ‘I’m watching the tires. I got this. I’m watching. I’m on flood alert.’ ”

A dangerous situation never materialized that night, but that hasn’t stop Goins from worrying.

Joy said she would appreciate any communication from the city or county about steps being taken to ensure that the Jump and Run Branch doesn’t overflow again.

While the flood last year was attributed to a massive amount of rain in a short period of time, Ricke and other neighbors questioned whether construction on the Britton Village apartment complex contributed to the flood by blocking the creek with runoff. City officials did not agree with that hypothesis, but they admitted some sediment from the Britton Village might have drained into the creek.

Britton Village, an affordable housing development located at 2280 Statesville Blvd., has been issued a temporary certificate of occupancy but is still awaiting approval from the city on its stormwater management requirements. Darrell Riley, an engineer for the city, said he’s waiting to hear from the complex and will complete an inspection of the water retention pond on site.

The pond will collect runoff from the impervious surfaces at the apartments where water can’t seep into the ground. Riley said the spillover from the pond will in fact flow into Jump and Run Branch, but it traverses about 250 feet of wooded area before it reaches the creek. Riley said he does not believe the pond would have any impact on potential flooding along the creek.

The portion of Jump and Run Branch that flows by building 200 in Wellington Hills is adjacent to the Sacred Heart Catholic Church property, which is owned by the Diocese of Charlotte. The diocese has cleared fallen trees along the creek in the past and has observed the creek’s erosion over time.

Patricia Guilfoyle, a spokesperson for the Diocese of Charlotte, said professional engineers on staff at the diocese’s Properties Office will continue to monitor the creek. In a statement provided by Guilfoyle, the diocese said it’s unclear what, if anything, can be done on the portion of the creek that runs through the church’s property because “this appears to be a broader stormwater management issue for local authorities to consider.”

“Like our neighbors, we remain concerned about the risk of future flooding,” the diocese said in its statement. “We are keeping an eye on the situation and doing what we can to mitigate erosion along our property.”

Editor’s note: This story has been updated since its original publication to reflect that the engineers monitoring the creek are employed at the Diocese of Charlotte’s Properties Office.