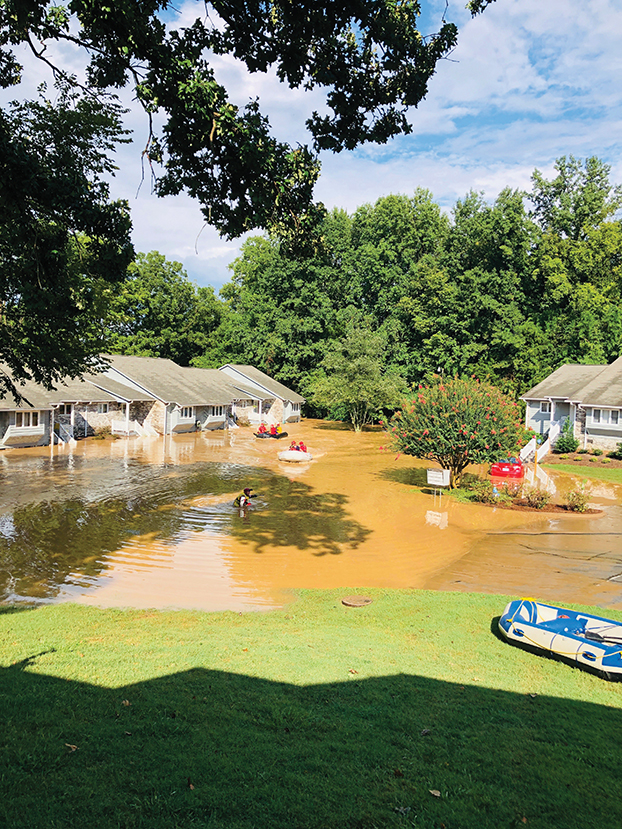 Editor’s note: This is the first in a two-part series looking back at a massive rain storm in August that submerged a neighborhood and forced people from their homes. The second part will be published in Tuesday’s print edition.

SALISBURY — Michele Joy watched from her kitchen window as the rain came down in sheets, wondering if she should move her car.

Soon, she wouldn’t have to.

In the three years that Joy has lived in the Wellington Hills neighborhood, which lies just within the Salisbury city limits, she’s grown used to moving her Kia to higher ground when it rains. Joy lives in unit 205, which is one of five connected condos that sit at the bottom of a hill in the 83-unit subdivision.

With a sloping driveway on the front side and a creek to its back, the building is essentially at the bottom of a fishbowl. On the afternoon of Aug. 31, that fish bowl began to quickly fill with water.

The forecast that day called for rain, Joy said, but it wasn’t supposed to be anything out of the ordinary. When Joy looked at the radar to determine if she should move her car, it seemed like the rain was going to abate at any moment.

“The radar wasn’t even showing it,” Joy said. “I kept thinking it was going to stop.”

It didn’t. At least, not until the damage was done. 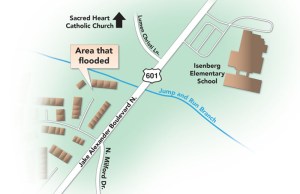 Joy and her neighbors had seen heavy rains push water closer and closer to their homes, but it hadn’t become a true threat until that late August afternoon.

In what seemed like just a few minutes, Joy said, a torrential downpour caused water to ascend the steps of her front and back porches. The land around them had disappeared. In its place was a muddy, swirling river.

“This was truly dangerous,” Joy said. “I really don’t know if I could’ve opened my door. That was what I was thinking was ‘I need to get out of the house.’”

Soon, Joy was standing in at least a foot of water on her front porch, waiting for emergency rescue crews to navigate their watercraft to her. She watched as her car, the one she’d thought about moving minutes before, washed away.

Judy and Mike Barnhardt, who live next to Joy in unit 204, also saw their car float down into the creek behind the building. The creek is called Jump and Run Branch; it feeds into Grants Creek and, eventually, the Yadkin River.

Judy and Mike’s red Nissan ended up being so deeply buried in sediment further down the creek that it took nearly a week for anyone to find it. 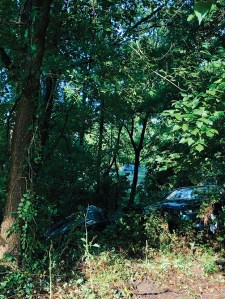 The flood on the afternoon of Aug. 31 carried several cars belonging to Wellington Hills residents into a nearby wooded area. Photo submitted.

Brenda Goins, the resident of unit 201, also needed rescuing and had her car carried away by the water.

The other two residents, Peggy Ricke (unit 202) and Byron Mintz (unit 203), weren’t home during the flood. Their cars were spared, but their lives, too, were forever changed.

The flood didn’t care who was home. It invaded all five condos, ruining furniture and destroying memories. Even though the flood happened nearly four months ago when the weather was still warm, the six residents of building 200 didn’t spend Christmas in their own homes.

Since that August day, they’ve been nomads, living with friends, family members or on their own. As the new year approaches, they’re still trying to put the pieces of their lives back together as they wait to move back into their homes.

Peggy Ricke thought the call was a joke.

Ricke was driving through Ohio, over halfway to Indiana to visit family, when she picked up the phone to hear Judy’s distressed voice. It wasn’t unusual for Peggy to receive a call from Judy, since the two are friends as well as neighbors, but it was unusual for Judy to sound so concerned.

She had called to tell Ricke that water was flooding their homes and that a rescue was underway.

“She’s always teasing me and she called me that day and said ‘Oh my God, Peggy, they’re coming to pick us up in boats,” Ricke said. “I thought, ‘Yeah, right.’ ”

A few days later, on a sunny, humid Labor Day morning, Ricke watched as her family members carried water-logged belongings from her home to nearby dumpsters. Earlier, Ricke had gone into the house herself to sort through the damage, but said that it was too painful for her to handle.

“We had four or five huge dumpsters full of stuff,” Ricke said. “Everybody gave up their plans and came and helped us.”

The families and friends of each resident came to help with the removal process.

“Mine was completely full,” Goins said. “My children filled up a whole dumpster with my stuff.”

All five condos received substantial water damage from the flood. Gail Mintz, Byron’s mother and the property supervisor for the Wellington Hills Homeowners Association, said that the damage was over half a million dollars on each unit.

Along with wrecking the floors, which have since been ripped out, the water ruined personal belongings of both sentimental and financial value. Pots, pans, towels, furniture and clothes were all spoiled beyond repair, and in some cases, beyond recognition.

When Ricke walked into her home the morning after the flood, the light gray carpet she’d recently purchased was stained a “nasty brown color.” The flood claimed memories as well. Tapes of Ricke’s daughter performing in the high school band that were sitting in a bucket in the living room were lost for good.

“I was more heartbroken about that than I was my couch, which was new,” Ricke said.

Each resident of building 200 has a laundry list of items that were lost — items they still find themselves reaching for on a daily basis.

“It has played on our minds,” Ricke said. “Judy and I talked quite a bit and we’ll say ‘Oh, I’ve got to go buy this’ and ‘Oh, I’ve got to buy that too’ and then we’ll both just say, ‘How much money are we even going to be able to save?’”

Saving money has been difficult for the six residents of building 200, which adds stress to an already challenging situation.

Since none of them had flood insurance — they hadn’t thought they needed the expensive policy —  they are responsible for replacing the furniture, clothes, kitchen utensils and other belongings they lost. Joy and her neighbors had to replace their vehicles. For Joy, that meant buying a bigger car so that she’d have the space to transport her belongings that no longer had a home.

The flood has caused havoc in the lives of all involved, but it’s been especially tough on Goins, Ricke, Judy and Mike, who are all retired. The flood has forced them to start over at an age when starting from scratch doesn’t seem possible.

The renovation process has been stalled for months since the units have to be thoroughly dried out first.  Plumbers and electricians are just starting to enter some of the units to begin the rehabilitation process. The floor hasn’t been replaced yet and there are no walls, so you can see from unit 201 straight through to 205.

“We have to wait until everything is a certain moisture reading, which takes time,” Mintz said.

As the residents of building 200 wait for their units to be fixed, they’ve made temporary living arrangements, many of which aren’t ideal.

Ricke has been living in her daughter and son-in-law’s basement, learning how to coexist with three kids and two dogs. Judy and Mike are staying with her son. Byron, in his fifties, moved back in with his mother. Goins found an apartment and Joy has bounced around but is currently renting a place as well, in addition to paying the mortgage on her flooded condo.

While they wait to move back into their homes, which Mintz said could be several months away, the residents of building 200 continue to question how such a devastating event could’ve happened to them. Everyone seems to have a theory about what went wrong that day.

If you ask the residents, definitive answers are still lacking, but one thing they agree on is that it started out with a lot of rain in a short period of time. 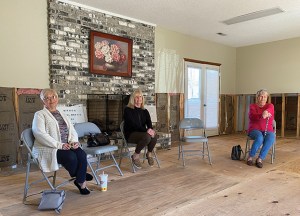 Peggy Ricke, Judy Barnhardt and Brenda Goins sit in the partially reconstructed Wellington Hills clubhouse. Although work has been done of the clubhouse, the rehabilitation process on building 200 is just beginning. Ben Stansell/Salisbury Post

Factors of the flood

The official cause of the flash flood event was heavy rain, according to the National Centers for Environmental Information’s Storm Events Database. The event narrative on the NCEI’s website said that two to four inches of rain fell over the basin in just a couple of hours.

Derron Dulkoski, the owner of The Revival Golf Course at The Crescent, said that he thinks it might’ve been more like 7 or 8 inches.

“I believe it’s the biggest flood that golf course has ever seen,” Dulkoski said. “As far as (putting) greens go, we had 15, 6, and 4 were all submerged in water.”

A little over four years ago, Dulkoski bought the dilapidated golf course that sits just across Jake Alexander Boulevard from Wellington Hills. The course also shares part of Jump and Run Branch Creek. Since he bought the course, he’s transformed it into a place where golfers actually want to play.

Now, he’s fighting a battle to keep his golf course in great shape.

“We’re going to have to dig some ditches, put in some trench drains, do something to try to control the flow of water. It’s impacting four holes in a big way.” Dulkoski said. “It’s a helpless feeling, but we’ve got to control what we can control.”

The residents of building 200 are familiar with that helpless feeling.

When the emergency rescue crews picked Joy, Goins, Judy and Mike up in their boat, the residents felt powerless. They were experiencing the results of what has since been categorized as a rain event that exceeded the 100-year rainfall totals. That doesn’t mean that the amount of rainfall received on that day only happens once every 100 years. It means that there is always a 1% chance that a certain amount of rain will fall in a particular location over a set amount of time in a given year.

When that much rain came pouring down from the sky on Aug. 31, it quickly began to pool around building 200. It was guided there from multiple directions: the sloping asphalt parking lot in front of the building and from the banks of the Jump and Run Branch in the back.

According to the Federal Emergency Management Agency’s flood map of Salisbury, building 200 lies within a 100-year flood zone. When the building was originally built in the 1980s, that wasn’t the case. But it was reclassified after the 1993 flood zone survey.

Being in a flood zone means that the area is likely to be inundated with water when it rains since the Jump and Run Branch needs somewhere to temporarily overflow.

Darrell Riley, the city of Salisbury’s certified floodplain manager, said that building 200 already met the city’s floor elevation standards for buildings in a flood zone, even before Aug. 31. During the rehabilitation process, Riley said that they will have to install flood vents and elevate the HVAC units, which were under the floor and were destroyed in the flood.

Watching water inundate the area around them has become a regular occurrence for the residents of building 200, but some of them say it hasn’t always been that way.