Defense shines as No. 5 Georgia edges No. 3 Clemson 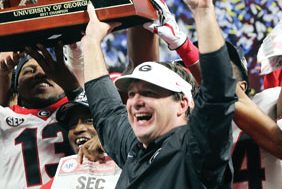 CHARLOTTE (AP) — Christopher Smith returned an interception 74 yards for a touchdown and No. 5 Georgia turned in a defensive effort for the ages, toppling third-ranked Clemson 10-3 on Saturday in the opener for both teams.

The Bulldogs held the Tigers to 2 yards rushing and sacked D.J. Uiagalelei seven times to position themselves for a run at the College Football Playoffs.

Uiagalelei finished 19 of 37 for 178 yards and one interception. He bobbled snaps, was out of sync with his receivers and spent most of the day under heavy duress against a relentless Bulldogs pass rush.

“We frustrated and confused them,” Georgia coach Kirby Smart said.

Even when Georgia turned the ball over, the Tigers couldn’t take advantage.

With Clemson down 7-0 in the third quarter, Baylon Specter appeared to give the Tigers they momentum they needed when he intercepted JT Daniels’ pass at the Georgia 33. But after a short gain on first down Uiagalelei was sacked on consecutive plays and Clemson was forced to punt.

Clemson didn’t score until 9:08 left in the game when a 44-yard reception by Joseph Ngata an a defensive pass interference penalty set up a 22-yard field goal by B.T. Potter, helping the Tigers avoid their first shutout since 2003.

Despite being dominated all game, the Tigers had a chance to tie with 7:35 left when they took over at their own 25. The Tigers would reach midfield and Dabo Swinney went for on fourth-and-5, only to see Uiagalelei’s hurried pass fall incomplete.

“I knew we were would be pretty good and pretty deep on defense,” Smart said. “But we’re more athletic than when we were in the past.”

From there, the Bulldogs ran out the clock.

In a first half dominated by defense — and some pretty impressive punting — it was only fitting the only score came when Smith jumped in front of a Uiagalelei pass intended for Justyn Ross and raced 74 yards to the end zone to give the Bulldogs a 7-0 lead at halftime.

Swinney played the blame on Ross making a bad decision on the route, saying he was supposed to “sit down” on the route but instead kept running.

“He didn’t make the right decision and it was a critical play,” Swinney said.

Daniels had a pedestrian day for Georgia, completing 22 of 30 passes for 135 yards with one interception, but walked away with a smile on his face saying, “We just beat Clemson, so I’m happy.”

The loss leaves Clemson with almost no room for error when it comes to making its seventh straight College Football Playoff. No team has ever made the playoff with two losses since the new four-team format began in 2015.

“I’m not going to write the season off because we lost 10-3 to a top-five team,” Swinney said.

Former Tigers quarterback Trevor Lawrence, the No. 1 pick in April’s NFL draft, made a surprise appearance at the game. Lawrence will start his career with the Jacksonville Jaguars on Sept. 12 when they open the season at the Houston Texans.

Georgia will make a leap into the top four, and possibly the top three after No. 2 Oklahoma struggled to beat Tulane. Clemson could drop out of the top five after being held to 180 yards.

Georgia: The defense is going to be a force to reckoned with. It held Clemson to 2 yards rushing and had seven sacks, barely giving Uiagalelei a chance to set up in the pocket. This may very well be the best defense in the country. The offense will need to become more explosive, although Daniels said “if the defense does that every game, we don’t need to score more than four points.”

Clemson: One of the concerns entering the game was how the Tigers were going to replace the production of running back Travis Etienne. Tigers running backs Kobe Pace and Will Shipley combined for just 14 yards on eight carries. On the flip side, Clemson’s defense is strong, holding Georgia to just three points. “Take away the interception and it’s a 3-3 game,” Swinney said.

ATLANTA — Bryce Young didn’t take long to prove he’s the man to lead No. 1 Alabama in its quest for another national title.

Young became the first Crimson Tide quarterback to throw four touchdown passes in his starting debut and the defending champions romped past No. 14 Miami 44-13 in the Chick-fil-A Kickoff Game on Saturday.

After sending another batch of stars off to the NFL, it looks like Nick Saban’s team simply reloaded for another run at the title. Young, a sophomore from Southern California, completed 27 of 38 passes for 344 yards — a performance that even managed to please his demanding coach.

“I thought Bryce did really, really well,” Saban said. “The poise he played with, the command he had. He kind of took what the defense gave him and really directed the offense in a positive way.”

Mac Jones and Joe Namath are the only others to throw three TD passes in their first starts for Alabama.

ELON (AP) — Walker Gliarmis booted a 26-yard field goal with 10:15 remaining and Wofford held off Elon the rest of the way Saturday.

After Elon gained a final possession with a strip fumble at the goal line at just over a minute remaining, a Skyler Davis field goal try from 46 yards went wide with eight seconds left, sealing the Wofford win.

Peyton Derrick competed 10 of 18 passes for 155 yards for the Terriers. He was intercepted twice. Irvin Mulligan rushed for 110 yards, including a 65-yard scoring run that staked Wofford to an early lead.

GREENVILLE, S.C. (AP) — Hamp Sisson passed for a career-high 362 yards with three touchdowns as Furman knocked off a ranked North Carolina A&T 29-18 in a season opener for both teams.

Furman turned two third-quarter turnovers into long touchdown passes. Sisson fired a 41-yarder to Joshua Harris and then a career-long 87-yard catch-and-run to Ryan Miller as the Paladins built a 23-3 lead against NC A&T, which was ranked No. 25 in the FCS football poll.

That set up the Sisson-to-Miller hookup as Miller, a tight end, caught a short pass in the flat and outran the defense all the way to the end zone — the fourth-longest pass reception in program history. He finished with 124 yards on four catches.

The Aggies hadn’t played since December of 2019 as the Mid-Eastern Athletic Conference sat out both the 2020 fall season and 2021 spring season. NC A&T has since left the MEAC and to compete in the Big South Conference.

VMI won its opening game in back-to-back seasons for the first time since 2009-10. Last season, VMI went on to win its first league title since 1977 by beating The Citadel.

Jakob Herres scored both of VMI’s touchdowns through the air, catching seven passes for 79 yards. Leroy Thomas added 10 catches for 58 yards, and Korey Bridy had a team-high 15 carries for 68 yards and a TD.

VMI built a 21-0 lead and added 17 straight points, spanning halftime, for a 38-10 lead midway through the fourth. Grant Swinehart’s 52-yard rushing touchdown made it 45-17.

Louis Colosimo threw two interceptions in his eight pass attempts for Davidson. Elijah Burrell completed all seven of his passes. Coy Williams, Mark McCurdy and Bernard Turner Jr. each rushed for a score.

CLINTON, S.C. (AP) — Michigan transfer Ren Hefley had a record-setting day in his first start for Presbyterian, tossing a FCS record 10 touchdowns in leading the Blue Hose to an 84-43 season-opening victory over NAIA-member St. Andrews.

Presbyterian made a winner of head coach Kevin Kelly, who moved up from the high school ranks for his first college game. The Blue Hose also had two TD passes from backup QB Tyler Huff, breaking the team record of 11.

Hefley completed 38 of 50 passes for 538 yards, throwing his 10th TD pass on the first play of the fourth quarter before taking a seat.

STATESBORO, Ga. (AP) — Logan Wright ran for 178 yards and a touchdown and Georgia Southern held off Gardner-Webb for a 30-25 win.

Wright’s 8-yard touchdown run with 6:32 left extended the Eagles’ lead to 30-18. Gardner-Webb then proceeded to march 75 yards in 11 plays and drew within 30-25 when Bailey Fisher threw a seven-yard touchdown pass to Justin Franklin.

Bell’s Catamounts pulled to within three points on a Rogan Wells keeper from the 1 plus a two-point conversion pass with just over three minutes left. WCU missed a 46-yard field goal attempt to force overtime on its final possession.

LYNCHBURG, Va. (AP) — Malik Willis threw for a touchdown and ran for another, and Liberty opened the season with a 48-7 victory over Campbell. Willis finished 15-of-23 passing for 217 yards.