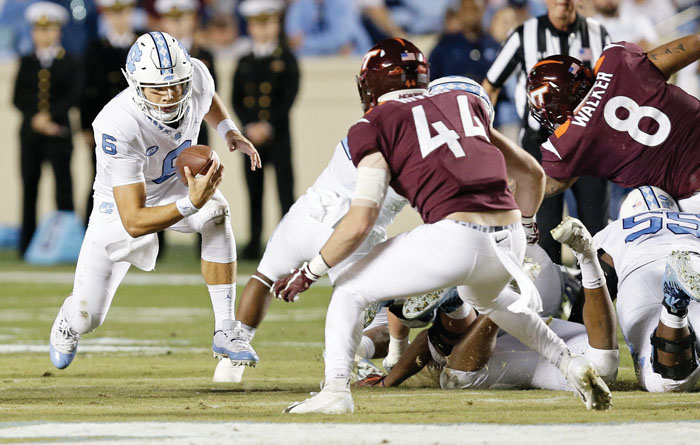 Quarterback Cade Fortin (6) will be wearing the South Florida colors tonight against NC State instead of Tar Heel blue like he did in 2018. (AP File Photo/Gerry Broome)

Now Fortin is the starting quarterback for South Florida, just in time for the Bulls’ visit to the Wolfpack tonight in the season opener for both teams. The rivalry reunion marks Fortin’s first start since playing for the Tar Heels in an overtime loss to the Wolfpack to close the 2018 season.

And yes, Fortin has heard from former UNC teammates about the matchup. “They’re just encouraging me and saying ‘Hey go be yourself, go out and play. we’ll be rooting you on,’ ” Fortin said.

Fortin was 0-4 as a starter in a bumpy 2018 season for the Tar Heels, which led to the firing of coach Larry Fedora and the return of Mack Brown. Fortin’s best game came in his final start against the Wolfpack, when he threw for 276 yards and accounted for two touchdowns.

N.C. State won 34-28 in a game that included an end-zone brawl between the teams.

“When we played him obviously, it was a long time ago in his career,” Wolfpack coach Dave Doeren said. “We know that he’s grown a lot since then, and he’s going to be a much better player than he was that day.

Tonight’s game marks the return of Wolfpack quarterback Devin Leary, who had shown growth in his game last season before going down to a season-ending broken leg suffered in October. And beyond Leary’s recovery, N.C. State knows it can lean on the ground game.

Doeren is pushing N.C. State to cut down on its mistakes, namely presnap and postsnap penalties.

The Wolfpack ranked among the worst teams in the Bowl Subdivision in 2020 in penalties and penalty yards per game in an eight-win season. So Doeren said he went through those penalties, one by one, with the team in an effort to erase “immature football.”