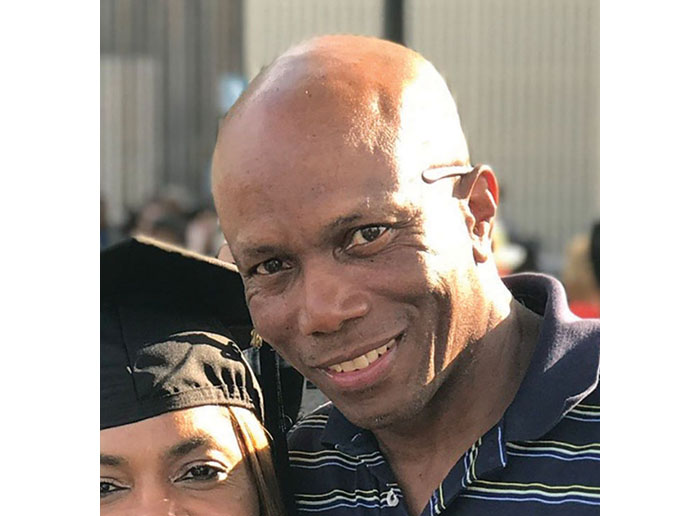 SALISBURY — A year after Wendell Rhodes was struck and killed by a car while walking his dog on the side of the road, a Mocksville man on Wednesday afternoon pleaded guilty to charges related to his death.

Chunn was sentenced by Judge Kevin Eddinger to 5 to 15 months in prison for the felony charge and received lesser sentences for the other three charges. Combined, Assistant District Attorney Brian Taylor said, Chunn will spend a minimum of six months in jail.

“This is the definition of tragedy,” Eddinger said. “A life is lost that can never be replaced. The law requires punishment.”

Eddinger delivered his sentence after an impassioned hearing during which several of Wendell’s relatives asked the judge to hand down a harsh sentence and talked openly about their grief.

“The emotional and financial impact of losing Wendell will be felt for years to come,” said Amelia Hasty-Rhodes, Wendell’s widow. “Wendell’s passing has left a hole in the hearts of our children and grandchildren that can never be filled.”

Not only did Wendell spend more than three decades in the military, but he was a two-time recipient of the Bronze Star. The 55-year old retired major moved to Salisbury from Fort Lee, Virginia, in 2015 and quickly became an involved and beloved member of the Rowan County community. An avid cyclist, Wendell was physically active and coached athletes at North Rowan High School.

Chunn struck Wendell around 6:30 p.m. on Aug. 5, 2020, while driving along Young Road in northern Rowan County. Wendell was walking his German shepherd near his neighborhood on a stretch of road Amelia said is frequently traversed by people in the area.

Although Chunn stopped at the scene of the crime and spoke briefly to a neighbor who heard the crash, he returned to his car and drove away from the scene. Chunn was driving with a revoked license for driving while impaired at the time of the incident.

During the hearing on Wednesday, Chunn’s attorney Reginald Alston asked Eddinger to give Chunn a lighter sentence and argued Chunn had no intent to hit Wendell and “did not see (him) at all.” Alston showed Eddinger a video captured from a dashcam of a car driving along the road where Wendell was struck. Alston said Chunn was driving into the sun and the trees surrounding the road created “dark shadows” that impaired Chunn’s vision.

Alston said Chunn “didn’t believe he left there hitting a human.” Instead, Alston said Chunn thought he could’ve struck Wendell’s dog, who Chunn saw wandering, still attached to its leash, near the scene of the crime.

Taylor said Chunn’s phone showed no evidence of distracted driving and a blood sample yielded “no cause” for an impaired offense.

Alston said Chunn “took responsibility early on” by returning to the scene with his father about 45 minutes after the incident and immediately submitted to questioning by the N.C. Highway Patrol. Alston painted Chunn as a “caregiver” and someone who “loves his community,” while stating that Chunn supports his 16-year old daughter and parents.

Throughout Alston’s oration, Chunn was seen wiping his face with tissue while fighting off tears. Although Alston said Chunn was “deeply remorseful” for the incident, Wendell’s family was not ready to forgive.

“Wendell was such a humble and forgiving person,” Amelia said. “I have not been able to accept his death. It still weighs heavily on me and, therefore, I’m not in a position mentally to currently forgive Mr. Chunn.”

Amelia didn’t forgive Chunn in the courtroom or believe claims he wasn’t driving while distracted or shadows impaired his vision.

“I really would like for you to one day tell me the truth,” Amelia said. “What were you doing on that road, and why didn’t you see my husband? Why did you leave him there to die? I know hearing the answers won’t help ease my pain but knowing will give me a chance to begin healing and hopefully one day forgive you.”

Lance Rhodes, Wendell’s son, also said he wasn’t ready to forgive Chunn. During his emotional speech, Lance bemoaned the fact that he’ll never be able to go on the cross-country bike ride he and his father dreamed about.

“There’s no replacement to the safety I felt when I had (Wendell) around,” Lance said.

Alisa Russell, Amelia’s cousin, questioned whether Chunn was truly remorseful because he never reached out directly to the family to offer an apology. Russell asked Eddinger to hand down the maximum sentence.

“At the end of the day, he still needs to pay,” Russell said.

Sheena Hasty, Amelia’s sister, spoke about the toll Wendell’s death has taken on Amelia, saying that she “hasn’t been the same since.”

Before handing out Chunn’s sentence, Eddinger said he found Chunn’s “acknowledgement of guilt” to be a mitigating factor. Mitigating factors include information or evidence presented about the defendant that can lead to reduced charges or a lessened sentence.

Amelia said the family didn’t leave the courthouse with a sense of closure and doesn’t believe the sentence was adequate or “comparable to taking someone’s life.”

Chunn’s family members cried audibly while he was handcuffed and taken out of the courtroom. Chunn’s last words directed to his family before exiting were “take care of my baby.” As Chunn’s family walked toward the doors of the courtroom, they offered their tearful apologies to Wendell’s family.