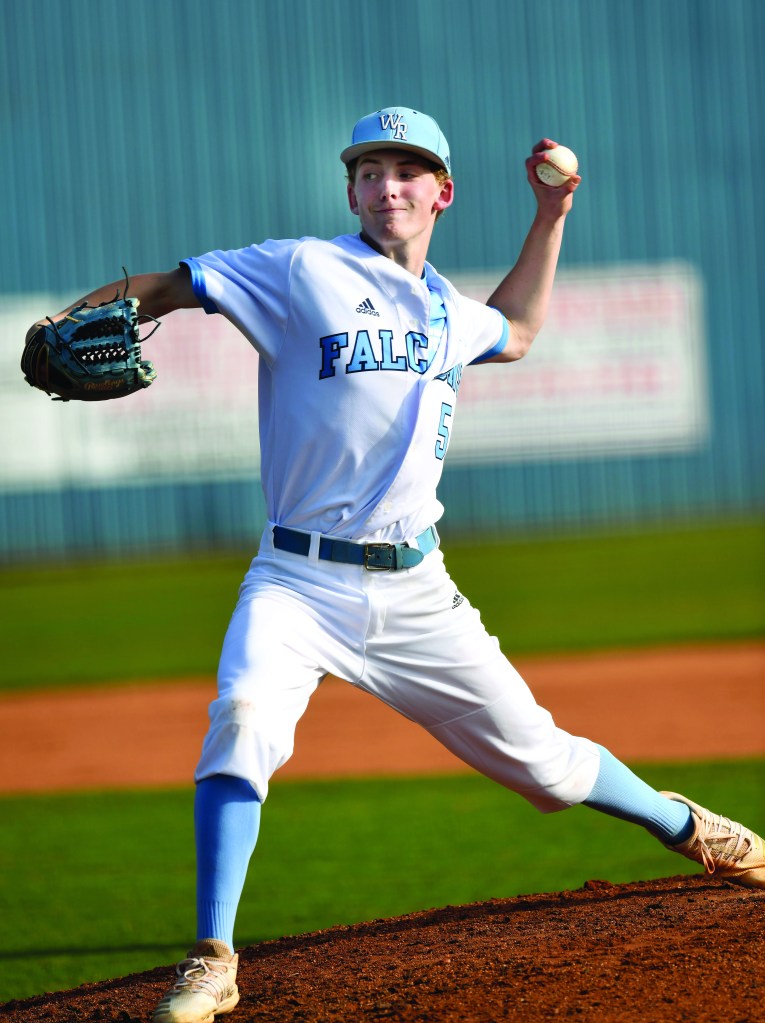 West Rowan pitcher Casey Gouge is headed to the US Naval Academy. File photo by Wayne Hinshaw, for the Salisbury Post

Gouge has mastered the curveball, improved the slider, and with the added weight and strength he’s added, his maximum fastball velocity has jumped to 85 miles per hour.

But baseball is still only second on the pitching prospect’s list of priorities. More than anything, he wants to be a fighter pilot.

Gouge took a critical step on his journey toward fulfilling a high percentage of his dreams earlier this week when he announced a commitment to the U.S. Naval Academy and its baseball program.

“They’ve had their eyes on me for a few years,” said Gouge, who has attended several week-long Navy camps. “I went to a prospect camp a few weeks ago, and that’s where everything got decided.”

The plan is for Gouge to attend a baseball-playing prep school next year and to enter the Naval Academy in June 2023.

Gouge isn’t average on the mound, in the classroom or on the job. He likes structure and embraces discipline.

While most teens are sleeping in, he’s doing homework, working out — or working a job.

“We knew he was going to be good when he arrived at West,” head coach Seth Graham said. “He was just geared different, more mature than most. When he was a freshman, he told me he could see himself at Navy because he always enjoyed the environment at their camps. So this commitment is no surprise.”

Gouge’s West career has been quieter than it should have been because of the pandemic. He was mostly a jayvee as a freshman. COVID cut his sophomore season short after a handful of games. He won three games in the shortened 2021 season. He’s 6-1 for his varsity career at West, but his 1.13 career ERA offers an idea of how hard he is to hit. He’s struck out 53 in 43 varsity innings.

Gouge pitched for the Rowan County NC3 team in the American Legion-less summer of 2020 and went 4-2. He pitched this past summer for 5 Star Baseball in showcase tournaments.

“We played all over against really tough competition,” Gouge said. “It was good for my development. Every lineup I faced had nine good hitters. I had to be at my best and bring my best stuff.”

Gouge’s stuff is good. It passes the eye test as well as the stats test.

The 17-year-old has a curveball that bites down and a slider that breaks sharply and horizontally. He can throw both for strikes in any count. Throw in a fastball that he locates well and a highly rated changeup and he has quite an arsenal for a young pitcher.

Gouge runs surprisingly well in the outfield and swings the bat with some pop — he was tied for West’s lead in RBIs as a junior — but at the D-1 level his future is on the mound.

Gouge has been a familiar name on statewide lists of  “best uncommitted pitchers.” It’s a bit of a relief to get off that list.

“The commitment does take pressure off, and now I can just go out and play my senior year,” Gouge said.

When he gets to Navy, Gouge will compete in the Patriot League against schools such as Lehigh, Bucknell, Lafayette, Holy Cross, and of course, rival Army.

He realizes that at Navy, baseball is going to be important, but still secondary to the rigors of the classroom.

He hasn’t met them yet, but he’s heard the stories about West Rowan graduates Brantley Horton, who competed in football at Navy, and Jon Crucitti, who played football and baseball at Army.

Gouge has grown up in a military household. His grandfather and father were Air Force men. When his father went to work at the W. G. Hefner VA Medical Center, the Gouges relocated from McDowell County to Rowan County when Casey was very young. That turned out to be a big break for West Rowan.

“I’ve seen it growing up, so I’m aware of what a military career means,” Gouge said. “I’ve talked to people outside the family, too. I know it’s going to be four challenging years in Annapolis and then a five-year commitment after that. The ultimate goal is to become a pilot — a fighter pilot.”

That’s a lofty goal, but it’s one Gouge is capable of reaching.

“Casey has always set high goals and he’s always stuck with them,” Graham said. “We’re proud he wears the West uniform. It’s an honor to coach him.”