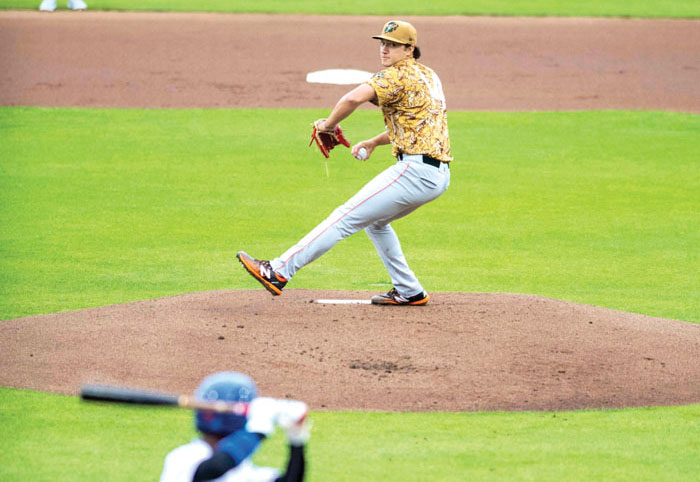 Down East Wood Ducks pitcher and Carson alum Owen White hurls in the opening game against the Kannapolis Cannon Ballers on May 4.. JON C LAKEY/FOR THE SALISBURY POST. 5/4/21, Kannapolis,NC.

KANNAPOLIS — Former Carson star Owen White’s second pitching appearance in Kannapolis on Sunday didn’t generate the hype that the first one did, but it was longer and more successful.

White pitched four innings in a 7-1 win by Down East Wood Ducks over the Cannon Ballers. He allowed three hits, one walk and one run. He struck out three.

White hurt himself in Kannapolis when he pitched against the Cannon Ballers on opening night, slamming his right hand on the ground in frustration in the third inning after making a wide throw.

That injury to his throwing hand put White on the shelf for almost three months, but he’s been good since getting back on the mound.

White won a game in Arizona before returning to join the Wood Ducks in Kinston. He’s pitched 8 1/3 innings for the Wood Ducks, allowing two runs, while striking out 10. He’s allowed seven hits — all singles.

White, who turned 22 earlier this month, was a second-round draft pick by the Texas Rangers in 2018.

The Cannon Ballers are home for the next five days (Tuesday through Sunday) against Lynchburg.

Attendance was 2,005 for Sunday’s home game at Atrium Health Ballpark.

Austin Love (West Rowan, UNC) made his pro debut on Thursday in the Florida Complex League.

Love, 22, was a third-round pick this year by the St. Louis Cardinals.

Cauble qualified on pole and led all 20 laps.

Salisbury won 3-0 against West Rowan on Monday.
The Hornets (3-0) controlled the action in the first half with 15 shots but couldn’t find the back of the net.
West Rowan keeper Luis Cruz (15 saves) made several key saves and the Falcons added five field player saves, thwarting numerous corners and put-back shots.
The second half saw the majority of the momentum stay with the visitors and Salisbury got on the board when Colin Donaldson found wing counterpart Will Webb to open the scoring. Donaldson also provided the assist on the second goal, finding Brayan Avilez to make it 2-0.
Avilez returned the favor when Donaldson completed the scoring on an angled shot from the corner of the box.
Wade Robins earned his second shutout in goal for the Hornets.
Salisbury got excellent play from Luke Graeber, Yatti Avilez, Riley Dillon and Mario Perez who made his first career start.
“This team is really starting to come together,” Salisbury coach Matt Parrish said. “Avilez is showing exceptionally well, and when he is on the front foot we have firepower moving forward with Donaldson, Webb and newcomer Daniel Cuevas. Carlos Henriquez and Bennett Clark have been tremendous in the midfleld, playing heavy minutes in very hot conditions.”
It was a tough game for Coach Parrish, whose son, Dylan is a freshman midfielder for West Rowan.
“Seeing him across the field was a unique experience and one I’m not particularly anxious to repeat,” Parrish said.  “We are a pretty competitive family and being on the same field was a mix of awkward and surreal. I thought he did well when he was on the field and has a bright future for the Falcons. He is definitely my all-time favorite player.”

South Rowan won 8-0 at Thomasville to open the season.

Noah Steedley had the clean sheet in goal.

HIGH SCHOOL FOOTBALL
Kernersville Glenn linebacker Albert Redd (6-3, 210) is considered a top-30 player in North Carolina and has been offered by UNC, Louisville, Georgia Tech and East Carolina, among others.

His grandfather, also named Albert Redd, starred on the defensive line for Salisbury High in the mid-1970s.

Mooresville’s postponed game at Davie has been rescheduled for Sept. 10. Both schools had the same open date.

Jayvee football was very limited due to weather and COVID last week.

Salisbury won 22-0 against West Rowan in a game shortened by lightning.

South Rowan’s jayvees lost 32-0 to Concord. North Rowan doesn’t have a jayvee team this year, but South has scheduled a game for Thursday at West Stanly.

The Golden Arm Award recognizes the top senior or upperclassman quarterback set to graduate with their class. The semifinalists, finalists, and award recipient are selected by the Johnny Unitas Golden Arm Selection Committee, a group of prominent college football journalists, commentators, announcers and former players. Candidates are chosen based on performance on and off the field.

Reynolds, a former walk-on, has become one of the top quarterbacks in Charlotte history.

Josh Malloy transferred from Chowan to Carson-Newman, so the Eagles now have two former Carson players on the roster.

Malloy is a defensive lineman, while Andrew Bradshaw is a long snapper.