David Freeze: A good day with a strange ending 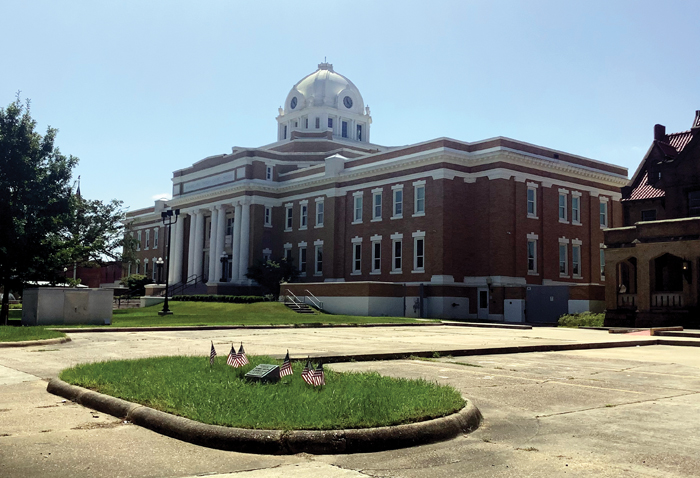 This is the courthouse for Beauregard Parish and the town of DeRidder. DeRidder is famous for a WWII Army Air Corps base that provided 20,000 acres for bombing practice. Photo by David Freeze, for the Salisbury Post.

I found the town of Kirbyville, Texas, to be friendly just like the rest of the state. But it was also time to get started into Louisiana. I left the Gateway Motel early, with only an egg and cheese biscuit. The roads were mostly flat as I headed east on S.R. 383 to Bleakwood and then Bon Wier, where the only convenience store had recently been burned out. The Louisiana border once again didn’t have a Louisiana sign. Not surprising because the last time I was in the state, there was no entry sign then either. Texas didn’t have one either but did have a Texas shaped rock.

The roads were great in Louisiana, especially since I was on U.S. 190 with wide and smoother shoulders. Next came DeRidder, famous for the lumber industry and a booming WWII Army Air Corps base for bombers and fighters to use for bombing and straffing runs. DeRidder had an unusual town with those going west one block away from those going east. U.S. 190 came back together just as I turned left to take an even better road east on S.R. 26. About two hours of that ride got hilly and hot, topping out at 97 humid degrees. The map writers called the area the hilly Louisiana upland. I found it easy riding after the mountains and hills of earlier states. S.R. 26 was one of the prettiest roads I have seen with a mix of well-kept older farm homes and varied agricultural production.

On the last 33 miles was where the hills came in, but then it leveled out just ahead of Oberlin, my home for the evening. Oberlin has less than 2,000 residents and it has a motel that I chose because of being right on the route. I found out that the motel was recently purchased and was undergoing a remodeling of sorts. A husband and wife were here working today, both nice, but the motel still has a long way to go. I actually helped to clean my room, which I found out was one of the first to be remodeled.

I will say more about it in the book on this trip, but the price is right and the room is squared away. With the super warm and humid day, I was ready to get off the bike after 81 steamy miles. The only breeze all day was what I generated on the bike.

I promised an update on the remaining mileage for the journey, and as of this afternoon the total remaining miles are 980, meaning that more than two-thirds of the miles are complete. If all goes well, I will finish off the fifth map series on Tuesday, leaving two more to go.

The map writers talk about dangerous roads, gravel shoulders and plenty of dogs ahead to chase me. A few did today. There is no radio reception and only a little better for the cellphone. I saw signs for Shreveport and hurricane evacuation routes. There are lots of towns but most don’t have services. I will especially have to be on my toes the next few days and won’t be surprised with anything the roads do.

So join me back here tomorrow when I am hoping to reach Bunkie, which sounds like a casino town. Bunkie is the only town with lodging for 30-40 miles in either direction.

More regular sponsors helping financially with the ride are Accelerate Therapy and Performance, Vac and Dash and Gear for Races. Thank you! See you tomorrow!

I’m not going to say much about yesterday’s motel experience, except to say it was one of the most challenging ever. No one should stop at the Crossroads Inn in Oberlin if you come this way. More about this night in my next book. 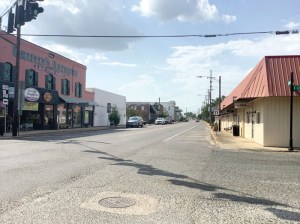 The downtown of Bunkie, Louisiana. Bunkie has just over 4,000 residents, plus Freeze tonight. Photo by David Freeze, for the Salisbury Post.

I left even earlier than usual this morning, and had to wake up the guy in the office to get the key deposit back. He never said a word even though it took him 10 minutes to do it. Tacos seem to be in the past. All the breakfast convenience stores are back to offering regular breakfast biscuits, which would be OK if they put potatoes right on the egg and cheese.

Using State Roads 26 and 104, I pedaled across two parishes and into Mamon. Just in those first 25 miles, I ran the gamut between smooth roads to terrible ones, so bumpy and rough that I could pedal only about half speed. As an example, I entered Evangeline parish and the riding was so rough that the bike was bucking like an upset horse. About 10 miles into that parish, the road suddenly got better.

Then it was on to Ville Platte on 104, 1181 and 29. Nothing unusual to this point, but that changed when I followed directions from the Adventure Cycling map while trying to ride through Chicot State Park. I stopped at the entry to the park and the girl there first told me that I couldn’t ride through the park because of COVID. Then she said they closed that part of the park about a year ago and she advised me to go back out the way I came in.

Next came the worst two roads of the day. State Roads 106 and 115 had deep holes and sections that were depressed as much as 6-8 inches below where the road should be. Very rough and no fun to ride, all as the day got close to 100 degrees, again with the only breeze generated by the bike.

Two interesting things happened on the way into Bunkie, my home for the night. First, I saw two wagon loads of cane stalks, just after I heard the farm market report that sugar prices were jumping.

Next came one of the most humorous events of the trip. S.R. 115 was the worst road of the day, and I was painfully counting down the miles. Then just ahead, I saw a dump truck with asphalt repair material and two shovels on it. Both the dump truck and pickup truck following were driving along at 3 mph and the drivers had their windows up. I wanted to take a photo so bad, especially since there were thousands of opportunities for road repair but the drivers wanted to stay cool and keep riding. It was probably close to quitting time anyway.

I am in Bunkie at the All Star Inn, apply named because each room has a different baseball theme. The motel is wonderful, but the neighboring convenience store is not, none of the advertised pizza or sandwiches. Just ice cream and chocolate chip cookies for tonight after 73 very hot riding with shaken innards.

Bunkie is known for its agricultural efforts, especially for the corn that the town celebrates each year with a festival and has for about the last 40 years.

One of the fun things for me when traveling by bike is the motel experience, all except for last night. I always like to dicker for a good price and want some kind of food within walking distance. Today, I got the great motel but failed the convenience store/restaurant part. The restaurant is closed on Mondays. Tomorrow night, I can do it all over again.

A question from a reader might be interesting to most readers. Why do I always ride a Surly Long Haul Trucker bike? It is my second one, after the first was totaled on the ride to Key West several years ago. I think Surly is the best because it is built to take a beating and haul a load. Heavier than a regular bike, it easily hauls me plus 40-50 pounds of gear and supplies. Plus I have been able to work on it most times and get it going again. Most distance riders count Surly as the best on the market.

I didn’t get much in the way of pictures today, but hope to tomorrow as I see the Mississippi River and hope to close out the 5th series of maps. And I might have a special motel location.

Thanks again to continuing sponsors Skinny Wheels Bike Shop and Leonard Wood. And thanks to the readers for being involved. I love your questions and comments, so keep them coming. See you tomorrow!