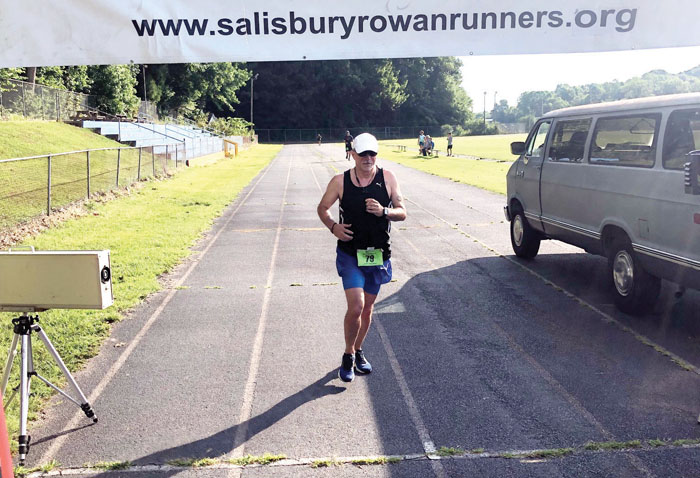 Police Chief Jerry Stokes ran the Run for the Greenway 5K on July 17th in 27 minutes and 3 seconds. Photo by Steve Clark.

It’s always good to see Chief Stokes at a race and he does lots of them.

Here is how he got started.

“My wife got me started seriously running when she took up the activity in 2002-2003,” Jerry said. “She kept after me, and eventually, I joined her running somewhere around 2006. It was all to be healthier and active. I did a few 5K races, and then I was hooked. My hometown, where I lived before moving to Salisbury, Lynchburg, Virginia, is a runner’s community. The running club, Lynchburg Road Runners, hosts a lot of races.

“Lynchburg is fortunate to have a pretty nice trail system similar to the greenway that is close to 10 miles of paved trail and another seven or so natural trails. The city is very runner-friendly, and it’s easy to get hooked with such a great trail system. Something I think is a plus for Salisbury with the way the greenway is developing.”

A police officer for almost 37 years total, with five as the Salisbury police chief, Jerry was born and raised in Lynchburg. He and wife, Zoe’, have two grown daughters and other family members that still live there. Zoe’ (also an SRR member) and their 17-year-old son live here since Jerry took the position of chief in 2016.

I always want to know the benefits of running seen through the mind of others. Jerry said, “My job is high stress, and without running, I would likely be overwhelmed at times; I still am, but running helps when that happens. It is an escape; when I run regularly, I feel better, my head is clearer, and I can give attention to the important things. I have struggled with the “normal” police health issues of sleep problems, high cholesterol, and notorious belly fat that comes from high cortisol levels (that adrenaline constantly being pushed out). Running helps those things. I was on meds at one point for cholesterol, but after adjusting my eating habits and losing about 30 pounds, I’m off the meds completely.”

As for goals, Jerry said, “I had an injury last year that took me off the streets for a bit; I haven’t fully recovered. Right now, getting my mileage back up is the goal. I was running three days per week, about 20-25 miles per week. I could pound out a half marathon any time I felt like it. I struggle right now with five miles. Once I’m back, my preferred distance is a half marathon. I want to get back to doing two to three each year. I may look at another marathon later. I did the Marine Corps Marathon in 2016. Training was tough and I really don’t have the time right now, but I foresee another retirement in the not-too-distant future that will give me the time.”

I asked what Jerry thinks about Salisbury’s designation as a national runner friendly community, especially since the PD is such a big part of it. Jerry said, “There are a couple of reasons; first, the city and PD do and should support community health initiatives. A healthy community is better for the economy and reduces social issues that relate to crime. Running is great for your health and requires little “equipment” or a gym membership, so it is an affordable option. Just get a good pair of shoes and hit the road. Secondly, it is a community engagement opportunity; community engagement is a big piece of our community policing efforts. Being present or supporting the races, being members of the club, or participating in the races is a way for officers to meet community members and get to know them. Relationships are what community policing is all about.”

For hobbies and other interests, Jerry said, “Work and family take a lot of time. Still, when I do have a few extra minutes I don’t use for running, I like to study or read about military history (specifically the Western Europe Front during World War II — that’s the DDay invasion and after). I’m also a train enthusiast, so it’s pretty neat to be near the transportation museum. I find the Pennsylvania Railroad of the 1940-1950s to be a pretty neat subject to learn about. Those huge steam locomotives hauling coal over the mountains of Pennsylvania and the passenger service of the time are very interesting.”

Look for Saturday’s SRR Prediction Run 5K and other events at www.salisburyrowanrunners.org .