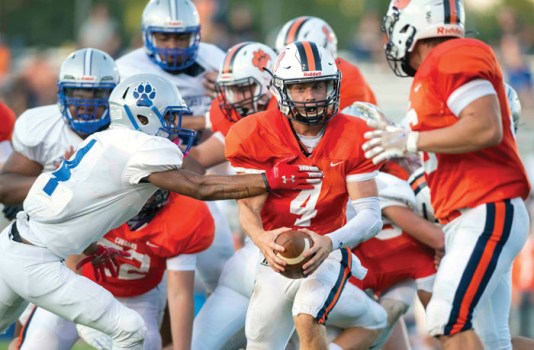 Carson’s quarterback Hunter Burris (4) gets caught in the backfield. . The Carson Cougars fell to visiting Greyhounds of Statesville High School 41-30 in the opening games of the high school football season. . JON C LAKEY / FOR THE SALISBURY POST. 8/20/21, China Grove,NC. 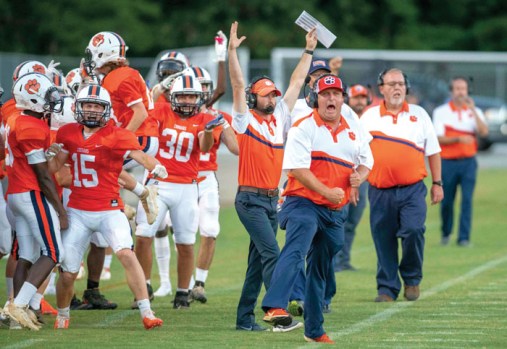 The Carson sideline celebrates a late first half touchdown. The Carson Cougars fell to visiting Greyhounds of Statesville High School 41-30 in the opening games of the high school football season. JON C LAKEY / FOR THE SALISBURY POST. 8/20/21, China Grove,NC.

The Carson band watches the late first half touchdown reception by Statesville high school as the clock runs out. The Carson Cougars fell to visiting Greyhounds of Statesville High School 41-30 in the opening games of the high school football season. . JON C LAKEY / FOR THE SALISBURY POST. 8/20/21, China Grove,NC. 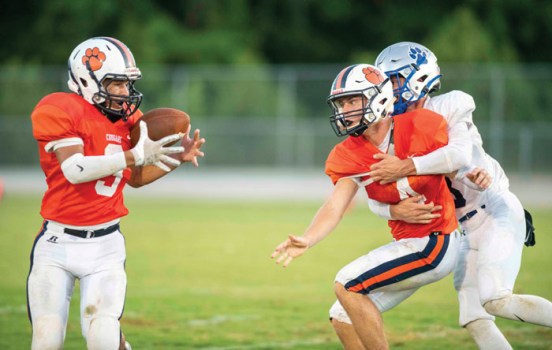 LANDIS — South Rowan won 14-0 on Friday against Parkland, a 4A school from Winston-Salem.

Parkland hasn’t been very good in recent years, but it still was a big, confidence-building victory for South in the debut of new head coach Chris Walsh.

South was giving up some 60s late last season, so this was a terrific turnaround on the defensive side.

“Parkland was a tough matchup for us, fast guys, tremendous athletes,” Walsh said. “So this win was largely due to the work of our defensive staff and our defensive kids. They won it. They played with fire and intensity all night.”

The single biggest stat was turnovers. South, which made three interceptions and grabbed a fumble, had a 4-0 advantage in takeaways.

Parkland has speed, but South contained it and never allowed a big play. Parkland kept the ball for some stretches, but there was always a penalty or a sack or a tackle for loss and none of those drives yielded points.

Offensively, South was able to do enough. Sophomore Jamie Klassette, who was expected to be one of the jayvee QBs, directed South’s offense.

“That was a decision that wasn’t made until Wednesday night,” Walsh said. “He went out there and never let the moment get too big for him. We told him those first few plays were going to seem really fast, but he settled in. No turnovers, and that was huge.”

After a scoreless first quarter, South got the game’s first big break with a second-quarter fumble recovery at the Parkland 10-yard line.

On fourth-and-goal from the 5, Landon Richards turned the left corner and got to the end zone. A try for two points failed, but South stopped Parkland’s last drive of the half at the South 25 and took that 6-0 lead to the locker room.

In the fourth quarter. South backed a Parkland team that is very uncomfortable punting back inside its 5-yard line with a sack, and the Mustangs sent a punt wobbling out to the Parkland 24 on fourth down.

On second and long, Klassette hit a wide-open JD James, motoring down the sideline, for a 23-yard TD. Then Klassette found Jacob Ritchie, who just got over the goal-line for a 2-point conversion and a 14-0 lead.

Lineman Max Bradshaw stopped Parkland’s next drive at the South 35 when he intercepted a tipped pass.

“Max was great on both sides of the ball all night,” Walsh said.

Parkland’s last desperate push carried the Mustangs all the way from the Parkland 18 to the South 14, but again they were denied. Javarus Jackson intercepted on the final snap.

“We talked all summer about how every kid on this team is going to have his chance to make plays,” Walsh said. “We can’t ask for anything more than what our kids gave us tonight. It was a special night, and now we have to get ready for North Rowan.”

Carson was able to stay in the game with the high-powered Greyhounds, but ultimately lost 41-30.

“It was another wild one with Statesville,” Carson head coach Daniel Crosby said. “They’re just so fast and we knew we had to play keepaway from them. For most of the night, our guys carried out the plan and did what we knew we had to do.”

Carson lost 43-31 at Statesville in the spring.

Carson was down 12 players in the overall program due to COVID quarantines, but was thankful to be able to play on a night when West Rowan, Salisbury, North Rowan, East Rowan and Davie did not.

“It hurt our depth,”Crosby said. “We were missing two defensive starters and they’re also backups on offense. Some things like that. With guys out, we used four different offensive line combinations in practice. But we’re very happy that we got the chance to play, with all the uncertainty there is right now, and we competed well.”

Down 14-8, Carson scored with 30 seconds left before halftime, tacked on another 2-point conversion and was in position to takea 16-14 lead to the locker room at the break. But Statesville scored on the last play of the half, coming down with a jump ball in the end zone. The Hounds led 21-16.

“Four or five guys were there, and they came down with it,” Crosby said. “That was a backbreaker.”

‘We still had the lead with about four minutes left in the game, and then their No. 5 (Jz Harrison-Connor) comes out of a pile of guys and goes 60 yards for a touchdown,” Crosby said.

Then Carson went four-and-out. The Greyhounds got another score late for the 41-30 final.

“We played some kids who hadn’t come out until this year, and it’s tough to throw them out there against a team like Statesville, but everyone did everything that they could have,” Crosby said.

HUNTERSVILLE — A.L. Brown held off North Meck 28-20 for a non-conference win on Friday.

That was one of six wins posted by Greater Metro Conference teams.

Xavier Chambers keyed the win with two TD receptions and a rushing score.

The Wonders led 14-0 after a wild minute early in the second quarter in which the Wonders scored, created a turnover, and then scored again.

But North Meck came back to even the game at 14-all at halftime.

Chambers broke a run for a 21-14 lead with 2:07 left in the third quarter, and the Wonders scored what proved to be the decisive TD on the ground with 7:16 remaining.

North Meck scored in the final minute, but was unable to recover an attempted onsides kick.