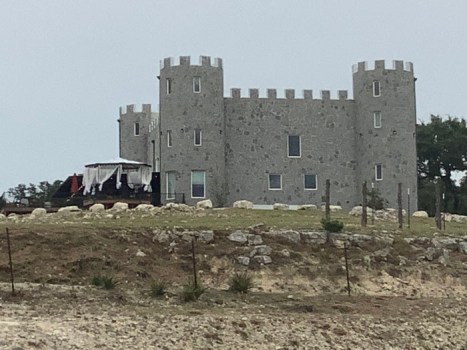 Freeze took US 290 from Fredericksburg to Johnson City after his bike was repaired. US 290 had miles of wineries and interesting attractions. The afternoon ride was fun! 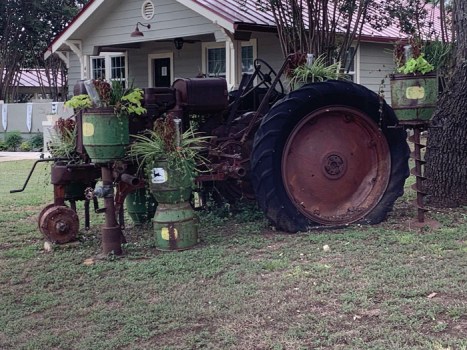 A yard ornament that Freeze would be proud of in Johnson City, Texas. 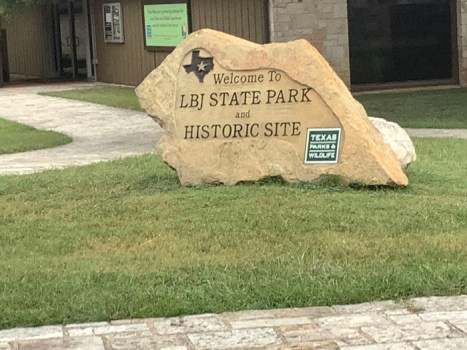 Johnson City, Texas is the home of Lyndon Baines Johnson, former President of the US. Freeze toured the visitor center at the state park where his ranch was located. 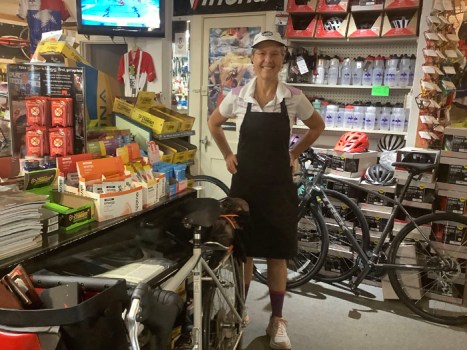 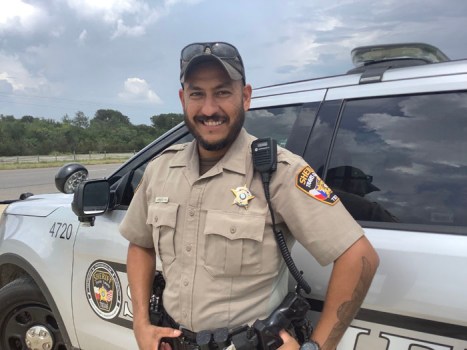 Leaving Kerrville, Texas, my only thought was to be in Fredericksburg by 10 a.m. when Hill Country Bicycles opened. I envisioned a one-hour repair and a continuance of the trip east.

On the way, I saw a police officer driving toward me and then putting his turn signal on. I knew then that he was going to stop me. He did. The officer pulled up beside me and asked me to come up to his side window. He asked if I was Taylor, and when I gave my name, he smiled big and said I wasn’t the cyclist he was looking for and to have a great day.

I made it the bike shop before it opened. Lisa, the owner and only staff member, showed up a few minutes late. We quickly had a disagreement about expectations. Lisa assured me that she would work on the bike but that she would have to handle customers and phone calls too. So, I told her what I thought the bike needed and did my best to be patient while customer after customer came and went. Over two hours later, I left with the bike in fantastic shape. I had sat outside most of the time, planning the next few days the best I could.

The chain wasn’t stretched, but she found the hub was loose and fixed that. It shifted better than it had in a long time. The metal had been in the tire but was now gone. The tube in the tire had a small hole; she replaced it with a new one. Plus, she put a new covering over the top of the spokes on the inside of the rim, saying it was wearing and would soon cause trouble. We had an enjoyable conversation at the end during which she told me that she had completed a three-year trip around the world on a bike.

After fueling up, it was more than 2 and a half hours past when I arrived. I got on U.S. 290 right away after some up and down to get out of town. Then, the riding was much more enjoyable. After Fredericksburg, which has a strong German heritage, I rode through Blumenthal, Stonewall, Hye and then into Johnson City. It reminded me of a segment of Route 66, with lots going on. There were miles of wineries, lots of unusual older vehicles and even a big castle on a bluff. One of the tall men from Route 66, labeled as “Howard Huge” was even on hand. The riding was so much fun!

Johnson City is the home of former U.S. President Lyndon Baines Johnson. I stopped at a state park that centers around his ranch and toured the visitor center. There is another National Historic Park here in Johnson City. Lady Bird, his wife, also had a park in Fredericksburg.

So, other than the long wait for the repair, it was a fun day, although short on miles at 55. I am at the Hill Country Inn, right beside one of the first Dairy Queens I have seen. My first pineapple milkshake was great! And a great convenience store is next door. The low-budget motel room has a cheap price but the biggest screen TV I have ever had in a room, perfect for watching the Yanks/ Red Sox as I write this.

Tomorrow, I hope to get through Austin and maybe as far as Bastrop, which would leave me less than 100 miles from the end of the current map section. If the bike keeps running well and I make the right choices, I will stay pretty close to the planned time frame.

Thanks again to the Post and all the readers and sponsors for making this trip happen! I completed what I think is the last big climb this morning and should be dropping below 1,400 feet from now on. The bike is good and I feel strong, so send prayers for safe riding.

Day 24: The most fun day of the whole trip

Last night, I really needed to sleep, and the girl in the next room had different guys in with a lot of loud talking. Plus, there was dog barking in a motel with no pets allowed. I finally got to sleep at close to 2 a.m. The best things about the Hill Country Inn were the  big screen TV and Dairy Queen across the road, and not much else.

I still left out early this morning in the drizzle headed toward Henly and Dripping Springs, Texas. There was lots of doable climbing early. Then, oddly the road shoulder decreased and the climbing lessened as I neared Austin.

Adventure Cycling always wants to avoid any central route through town and had this elaborate around-the-world plan that I didn’t follow. I went right through rather easily in a city with a population of 800,000. Drivers were courteous and, oddly, the city gave me two options. The route was on U.S. 290/71 East. You could do it on the freeway or on a frontage road next to it. I did some of both.

The routes split, and I stayed with U.S. 71 through Montopolis, Garfield and on into Bastrop, my home for the evening. Bastrop has about a half-dozen motels. I called them all. Last night, they all had high prices, but I checked again when I got near the town. Google Assistant found the Budget Inn. I called and got a price of $72, tax included, while all the others were over $100.

The Budget Inn is perfect, with all the comfortable things I need. A great convenience store at a long block away in a historic neighborhood. The motel has great WiFi and ice, two of my big needs and it is very quiet here. I’ll make up that sleep tonight if that holds.

Now for the highlight of the day. Just before I reached Garfield, I spotted a sheriff’s department car and stopped to confirm my directions. I have met some great officers so far, but had the best conversation yet with Senior Deputy Jonathan Barrientes. There was no real human contact until that point, and we hit it off. I promised to keep him updated, especially because he knew a lot about the areas I have traveled so far. Later in the afternoon, he beeped his siren to me as he also headed home to Bastrop.

I got to the motel at about 5:30 p.m., intent on finding food and getting my daily update in. The owner showed me where to find the best convenience store and another resident struck up a conversation about my trip. Mark is from Fresno, and asked about everything. He mentioned that he didn’t have anything to eat. So, while I was gone, I picked him up a few things too. Mark seems a good guy, and at least for this evening isn’t hungry. Also, I keep finding good prices on bananas at the convenience stores — remember I’m trying to visit them all across America.

In another highlight of the day, the Y Service Club at the South Y donated $50 toward my ice cream fund. I bought two pints of cherry vanilla and strawberry Blue Bell ice cream to get started using their contribution.

And finally, I got 77 good miles in today on another mostly cloudy day. Very pleasant riding. I’m not sure of my goal for tomorrow yet but will work on it as the ice cream gets eaten. At this point, I will be happy with another productive day!

Keep the questions and comments coming. I love them all!