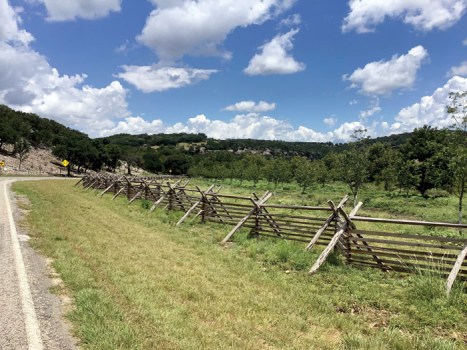 This fence was the first thing Freeze saw today just as he got to the Guadelupe River. Very impressive! Photo by David Freeze, for the Salisbury Post. 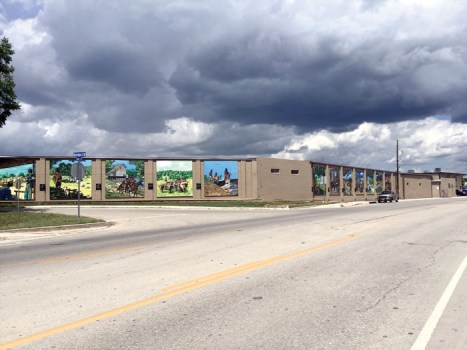 This building with all the murals was in Ingram this afternoon. Not the storm coming! Freeze sat out a half hour downpour under the shelter of a BBQ restaurant. Photo by David Freeze, for the Salisbury Post. 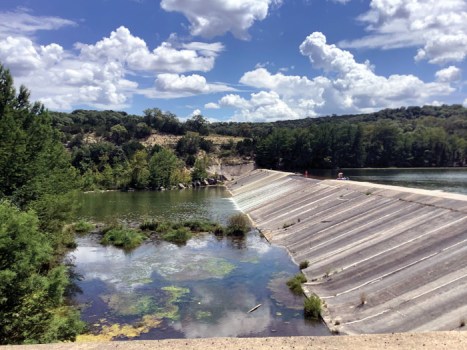 The Guadalupe River at its widest. Freeze first saw it at about 20 feet wide and the water not moving much. Photo by David Freeze, for the Salisbury Post. 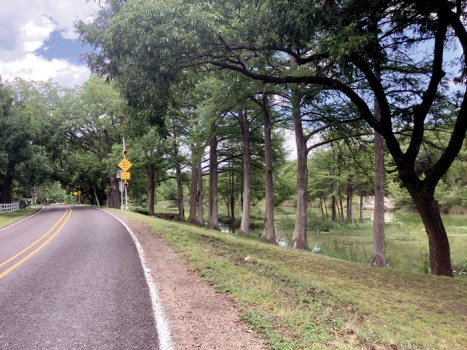 Real trees, lawns that were being mowed, and the peaceful Guadalupe River was the setting at Hunt, Texas. Freeze rode in the shade often. Photo by David Freeze, for the Salisbury Post. 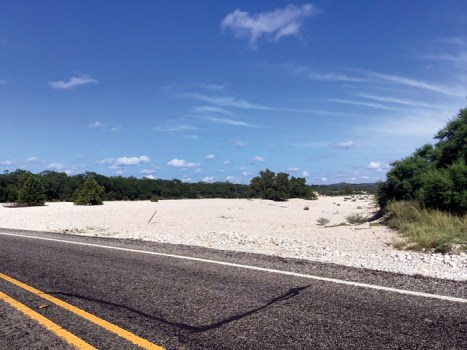 This is the West Neuves River. Most of it looks like this. Photo by David Freeze, for the Salisbury Post. 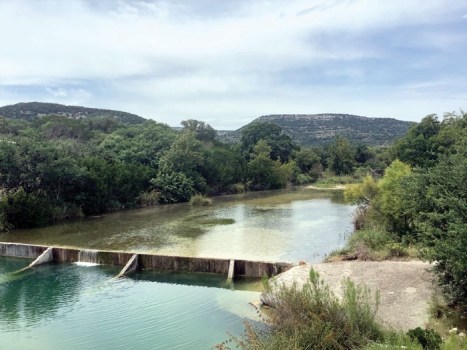 This is Camp Wood Creek. Most rivers and creeks have been dry or close to it. This one is between Camp Wood and Leakey. Photo by David Freeze, for the Salisbury Post.

Last night, after I had submitted Saturday’s update, I happened to check the tires on the bike for proper inflation. First time I have done that late at night. The back tire was going flat. So with the giant room, I unloaded everything and changed the tube. Changing the back tire tube is much harder for me than the front one, because all the parts have to fit back together on the chain and brakes. I got it done and still hit the bed about 11:30 p.m.

Up at 5:45, I was out the door before 7, grabbed two egg, potato and cheese tacos, then started the long journey from Brackettville to Camp Wood. That is about 50 miles with no supply points in between. Very light traffic on a gradual climb, all good except for the gravely road. This type of road is common in this area, leaving me searching for a smoother section. Usually it is where the car and truck tires have worn the rocky surface down some. Nearly all of this was on S.R. 334.

At Camp Wood, the grocery store and convenience store were combined into one. I got a few supplies, some ice and headed toward Leakey on S.R. 337. Again, very light traffic and not much unusual to see. Just a bunch of false summits, thinking I had made the top when I hadn’t.

With about 10 miles to go, another storm looked ready to unload on the area and I rode hard toward Leakey to beat the rain. I made it, grabbed a few things at the local grocery and was disappointed that they didn’t have bananas. All this while my room was made ready at the Historic Leakey Inn. I have a great cyclist’s price in a room with interior rock work and a real wood ceiling. The original building was constructed in 1929 and lots of the old construction is still around. Leakey has a population of about 425.

I will be headed north tomorrow on U.S. 83 toward Kerrville. Today’s ride was 72 miles, most of it still challenging. This Texas hill country wouldn’t be so bad if the roads were better.

I just added things up and it looks like we’ll hit halfway tomorrow in Kerrville. After tomorrow, about 350 more miles to Louisiana. I will be ready for flatter ground.

And finally, something unusual from this morning. I noticed a canvas day pack, like a hiker would use, lying in the grass near the road. Then noticed a second one, both very nice packs and full of random stuff. Nothing I could use to contact anyone. I left them there, hoping that the owners would come get them.

Join me for “Halfway Day” tomorrow. As always, thanks for riding along.

I loved the room last night in Leakey. All went really well until I got up this morning and checked the back tire. Flat again! I could have stayed there this morning and put my last tube in it, or reinflate it and deal with it on the road. I chose the latter.

Out with the first light, my goal was to get a jump on the climbing today. I rode north on U.S. 83 and had only one severe climb, then turned on U.S. 39 toward Hunt. Lots of rollers, up and down, trying to manage the gears and grab momentum on the downhill enough to help get up the other side. Supposedly, this is the Texas Hill Country. That is the sign for the series of roads and the area I am in now. Glad it is no longer Texas Mountain Country.

The climbing was horrendous when I got to to the start of the Guadalupe River. I found out later that early settlers in the area had the road cross the river about a dozen times to slow down the river in high water situations. Over and over I raced down the hill and struggled up the other side. Finally, I reached a high-end resort area with lots of inns, lodges and homes along the river. The road became much calmer as it stayed on one side of the river and a canopy of trees made the riding much nicer.

I added air to the tire about 2 p.m., just after the small settlement of Hunt. No population given, but The Store had a cafe, convenience items, gas, winery and a meat market, plus a bank. I got a huge brownie and ice there to fuel my ride into Ingram and on into Kerrville.

I had been watching a huge storm building off to the north, and the bottom fell out just as I entered the Kerrville city limits. Still nearly six miles from my motel for the night, the Lone Star Inn, I waited for 30 minutes under a BBQ joint’s cooking area. Still raining, but tolerable, I hit the road and found the motel. I am on the Kerrville/Fredericksburg Road or U.S. 16 after 65 challenging miles today.

The significance of being on the way to Fredericksburg and the tire issue, hopefully will play out into a happy ending tomorrow. I must have a piece of metal in the tire that I can’t find and there is supposedly an open bike shop in Fredericksburg. No one answered the phone today, or for the one in Kernersville. Bike shops usually open later, so if I can get the same result out of the back tire tomorrow and the shop is open, I will get it fixed. If not, I will ride back to Kerrville. Other things that need attention on the bike are a chain that I think has been stretched with all the climbing, a water bottle holder that vibrated off with all the rocky roads and a couple other possibilities. Fredericksburg is about 23 miles east by car. Worst-case scenario is that I end up back here tomorrow night, just to get the bike fixed. Usually about halfway is time to get the bike some professional attention.

It has been pouring again since I got in the room. I did get some bananas and my ice cream plus microwave pizza to refuel after another day of Texas hills.

Austin, Texas is coming up quickly as I continue to head east. It was a beautiful day today, again not too hot.

Join me tomorrow for the continuing saga of the tire. My elevation diagram says only one more mountain taller than 2,000 feet and it just happens to be tomorrow.

David Post has joined the journey as a sponsor again. Two more anonymous ones have also joined. Thanks to them and all the other sponsors who are making this adventure happen! Time to get to the ice cream! See you tomorrow!