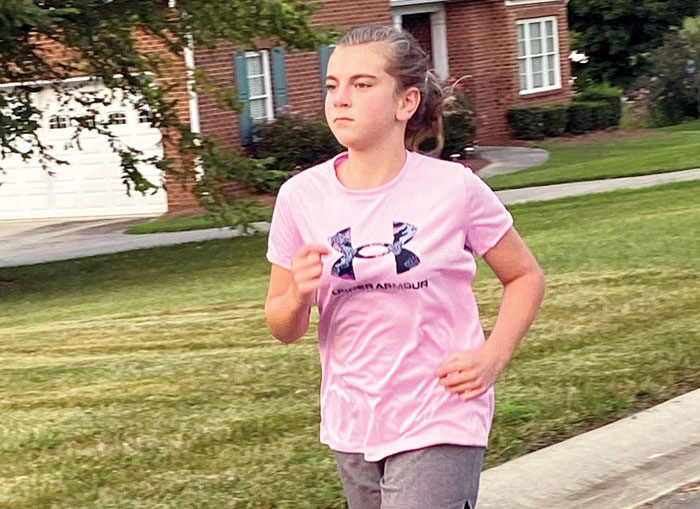 Reagan Bradshaw out for a training run. Photo by Crystal Bradshaw. +

Young runners are the future of our sport, and it seems as if there has been less of them for the last 10 years or so. Lots of races barely had enough kids to win all the “under 19” age group awards, but recently we are seeing an increase in competitors. Cross country for high school and a few of the middle schools should add some kids after the season are over, but they seldom do. My point is that kids need to run year-round and be willing to compete against the adults to reach their potential. Two reasons for doing this matter. For the love of running and the willingness to get better with every opportunity.

Reagan Bradshaw fits the scenario that I just described. Here is her story. She said, “I started running when I was in third grade and joined Girls on the Run at my elementary school (Bostian Elementary).  This would have been in 2018. I participated in Girls on the Run for three seasons. The last season was not held at my school during the pandemic. I joined the team at Granite Park.”

Trent and Crystal Bradshaw are Reagan’s parents, and both are lifetime Rowan County residents. Reagan said, “My dad owns Bradshaw Financial Planning and my mom works with him. My brother Andrew graduated from Jesse Carson High School and is now a football player at Carson-Newman University. My parents and my brother have always supported me in running. They encourage me and get me where I need to be to run races.”

I met Reagan, now 11, at the spring Salisbury Rowan Runners/Parks and Rec Beginning Runners Class. Usually, we limit any attendees under 12 years of age based on a lack of attention. Reagan and Crystal came to the class and Reagan devoured the information and kept up her training homework. She joined Finley Holder, another young runner, who also was focused and successful in the class. Therefore, the fall class that starts on Sept. 9 will also allow young runners in hopes of the same results.

Reagan mentioned one day that she wanted to get faster, so we had a couple of our better women runners run with her during class. She said, “I want to get my 5K time below 30 minutes and also be successful on the cross-country team at Gray Stone Day School where I will be starting sixth grade in August. Every time I run, I still try to improve my time. I hope to run as many races as I can to keep improving.” Nothing makes a runner faster than racing often at a 100% effort. Its better than any other speed training.

Some of the benefits of running are already evident to Reagan. She said, “Long term, I want to continue running to stay healthy and maybe continue on to be a college athlete. I have met a lot of people through Girls on the Run and the beginning runners class. Running pushes me to do the best I can possibly do each time and it makes me feel good.  When I finish running a 5K, I have accomplished something. It is always very rewarding to hear my name called out to receive a medal because I know the hard work has paid off.”

Other things are important to Reagan as well. She said, “I love dogs, especially my own and hope to one day be a veterinarian so I can help dogs and other animals. Softball and swimming are my other two favorite sports. I like to travel and spend time with my family, especially outside. Other things I do in my free time include playing the piano and crocheting.”

The Salisbury Rowan Runners will have another 5K Prediction Run on Aug. 28 and the Love Thy Neighbor 5K and 10K races will be held on Sept. 11. Look for the details on these and other events at www.salisburyrowanrunners.org .