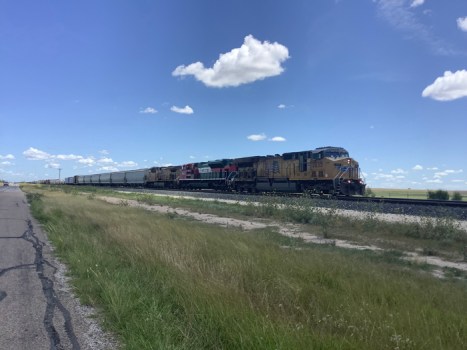 Freeze loves having the trains close by. It also means that the terrain is more likely to be moderate. This train was next to US 90 on the way to Brackettville. 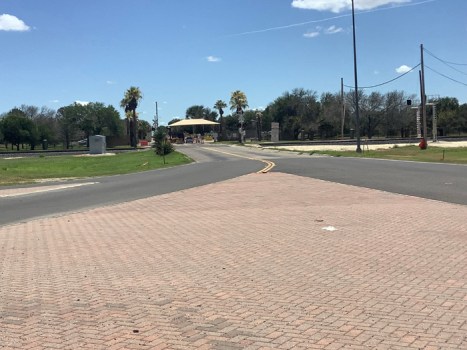 The entrance to Laughlin Air Force Base. It was famous for training B-26 Marauder pilots during WWll, one of which was General Jimmy Doolittle. The base also plays a part in training astronauts. 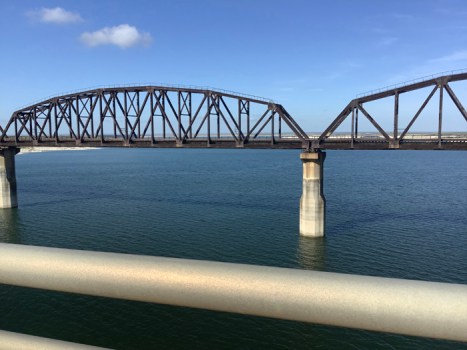 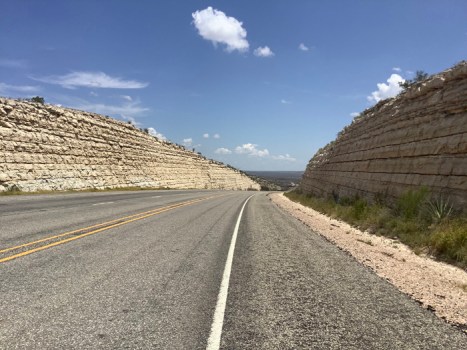 As Freeze neared Comstock this afternoon, lots of these rock formations were at the top of the climbs. 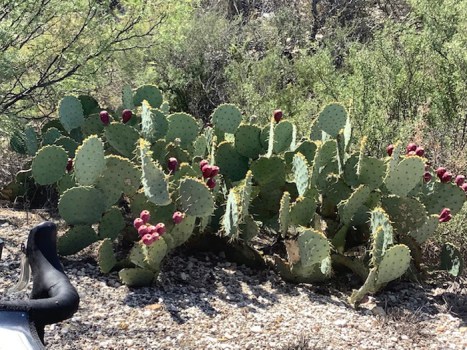 Freeze saw prickly pear cacti along the road with red appendages that looked like apples that come after they bloom, and like rose hips, are edible. 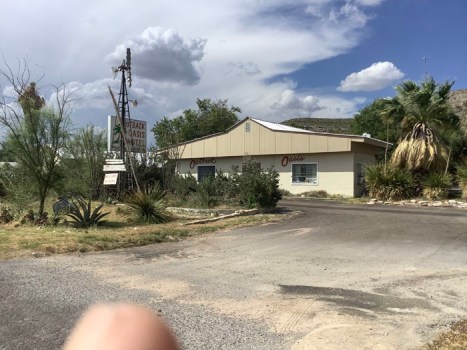 Freeze’s motel for the night in Sanderson, Texas. The Outback Oasis Motel. 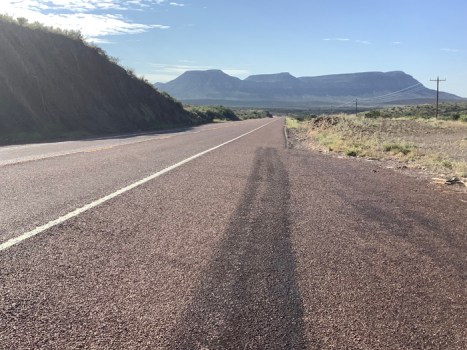 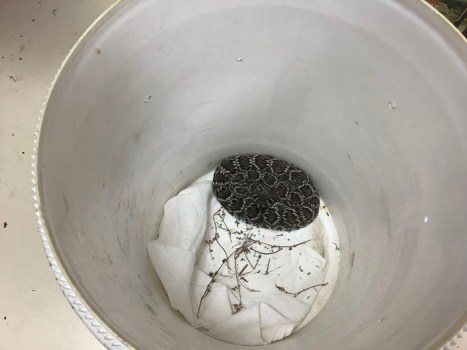 A black western rattlesnake caught a couple days ago near Freeze’s motel door.

Editor’s note: David Freeze, who lives in Rowan County, is biking from the West Coast to the East Coast along the southern border. Email him at david.freeze@ctc.net.

I’m sitting in the Outback Oasis Motel in Sanderson, Texas, getting ready to watch the Yankees and White Sox in the Field of Dreams game after I asked last night over the phone whether we could get the Fox channel to see the game.

Back to the bike ride. I left Marathon this morning amid a light drizzle. The first 20 miles were steady, moderate climbing. Still on U.S. 90, the sky cleared and it warmed up. Then, the terrain leveled out and even turned downhill on occasion as we, the bike and I, left the high mountains behind. I faced a steady headwind for the last 5 miles and it is still blowing outside. My ride today, from Marathon to Sanderson, included no other towns or anything especially interesting. No radio and sparse cellphone coverage. A car or truck about every 3-5 minutes, and lots of empty unmoving train cars as I cycled by.

Everything about today was a setup for tomorrow. So few towns, or supply points, leave me with a challenging 90-mile ride tomorrow from Sanderson to Comstock. All I can count on is a water stop about midway, and a motel room already assured in Comstock. No food, if I don’t get there before 7 p.m. I plan to leave to ride at least the first hour in the dark tomorrow.

Once I got to Sanderson, my first stop was a truck stop convenience store — remembering my craving for ice. Then I went across the road to my motel. While checking in, I was treated to a live reptile exhibit. I learned that there are 65 varieties of rattlesnakes alone, many of which were in glass aquariums to see. One black rattlesnake was captured near my room just a couple days ago.

Bar none, this is the best motel I’ve stayed in on the trip. Good price, huge convenience store across the road, wonderful motel owners and plenty of available ice. It’s an old motel, but I love it.

So, tomorrow will be tough. Then, I have figure out how to proceed farther east into Texas. I would like to ride through San Antonio, although Adventure Cycling wants me to turn north and ride more hills. I will close out the third map panel of seven total for the whole ride on Saturday morning. While the game is on tonight, I am going to study the Texas map. I’ve loaded up on snacks and water for tomorrow.

That is it for today! Send those wonderful prayers, both for stamina and the right decisions. I appreciate all the support from readers as this journey continues. See you back here tomorrow!

Last night in Sanderson, Texas, I went for a bike ride down Main Street, just to see what the town was like. I had ridden in against a stiff headwind, and it was still going last night. The wind pushed my bike back up the hill toward the motel. I began to worry that the same wind might be in place today.

My goal was a 90-mile ride, only because there were no supply points listed and no motels until Comstock. There was only one other town on the long route today, and that was Langtry.

I left Sanderson about 5:45 a.m., riding by flashlight in the pitch dark. Without the wind, I had completed 13 miles by 7 a.m. The wind began to pick up, and so did the hills.

The route was listed as a moderate downhill, but in fact the climbing was brutal with more than 50 large rollers. Some were a quarter- to half-mile long, and it seemed I was always climbing.

By noon, the headwind was full speed in my face. This was the first significant headwind of the trip, and it made everything hard. Water consumption was way up.

The temperature was warm, too. So, I stopped in Langtry, Texas, where a small convenience store was open. I was told yesterday that it might be. I went in, found no one and picked out some waters and a Diet Coke. I paid at the counter with no one around, noting that someone else had done the same. I went back to get two more waters and the owner came in. Nice guy, very interested in my trip, but wanted me to hang around until the sun went down some. Couldn’t do it.

Langtry also has a nice tourist center and a museum of sorts on Judge Roy Bean, billed as the “Law West of the Pecos.” Six dioramas tell his story. Bean was famous in the late 1800s but I was pressed for time and the wind was getting stronger. So, I didn’t hang around.

Immediately out of Langtry, the serious climbing began. Over and over, big rollers had to be conquered. Later than I hoped, I ended up at the Comstock Motel after 91 miles.

I’m hoping the headwind is gone tomorrow, I will head for Del Rio and the end of another map segment. Late morning, I will start map four of seven and follow the suggested route. Essentially, that map segment will be hilly. At the end of it, I will move into Louisiana where there will be no elevation to report. Glad for that!

I am going to get a shower and turn in early. The headwind and early departure beat me down. Border agents are around quite a bit as the Rio Grande and Mexico on the other side are very close again.

Day 20: Dreading the next map segment

Last night, I spoke to two of the Comstock locals just before going into my motel. Both assured me that there would be only a couple of examples of climbing today, an “easy day.” I didn’t believe it for a minute.

I left Comstock after devouring a microwave breakfast biscuit. Right away, I found the road shoulder to be terribly rough. I kept trying to ride in the lane but couldn’t stay there long. It was the beginning of a slow day, more of which are coming.

The bigger town that I saw today was Del Rio, another border town, with about 35,000 residents. It seemed that I began climbing in earnest just before Del Rio as I passed the first huge body of water on the trip. The Amistad National Recreation Area had a nice reservoir and apparently a lot of recreational activity. It was the first time in a couple of weeks where both sides of the road were busy for miles. I rode into Del Rio looking for the bike shop, needing a few things, especially since I am nearing halfway on the trip. I found Lakeside Sports closed, even though they are usually open on Saturdays.

Getting warmer, I fueled up for the 35-mile ride to Brackettville. There’s a gradual uphill all the way, every single bit of it with rough shoulders. The road wasn’t much better. I had just enough water to make the ride, just sips to spare. Along the way, I saw a couple of freight trains right beside U.S. 90. I also stopped at the entrance to Laughlin Air Force Base. The entrance is just a stone’s throw from U.S. 90. The base is historically famous for training the B-26 Marauder bomber crews from World War II.

There wasn’t much else to see, except a lot of speeding traffic. I kept jumping on the main road because it was much smoother. The ride totaled 65 miles, but it was well earned. There will be short totals the next few days because I will be on small roads that are jammed with hills. I’m not thrilled.

Having not done my planning as usual, I got to Brackettville, and tried to call the Fort Clark Motel. Three locals told me it was open, but no one answered the number. I stopped at a Stripes convenience store and was told to go to the guard gate and ask. I did and found out the whole motel was rented for a family reunion.

The guard told me to call the Alibi Hill Bar and Grill, that they had large and nice rooms. That was an understatement. I have a small apartment with a full kitchen and plenty of room. My only other experience at spending the night in a bar was in Alma, Colorado. It didn’t turn out well, but I think this one will be OK.

I have some things to do on the bike tonight and hope to get to bed early again. Then, I will just make the best of tomorrow. Accommodations and towns will be limited. Comstock from yesterday has about 150 residents. Brackettville boasts about 1,500. That will likely be more than all the towns added up in the next couple of days.

My legs are very tired, but I will endure all the climbing coming up, just hoping for nice scenery. I did get radio reception today and cellphone coverage too. But I bet both are leaving again tomorrow. The cool days are gone, the headwind remains and there is plenty of roadkill — armadillos and deer, among other things. The heat makes them really smell.

If I get time tomorrow, I will see where the trip is exactly on mileage; I believe almost halfway. The second half should get a lot easier.

Stay with me, keep praying and I will keep the updates coming! See you tomorrow!