Freeze: Why biking adventures are so much fun 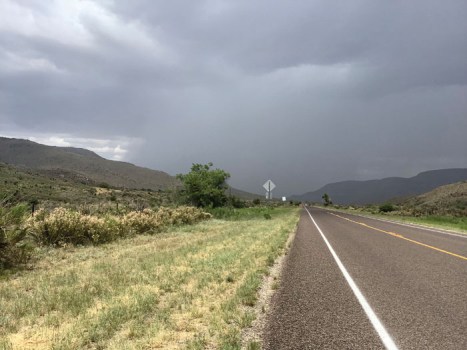 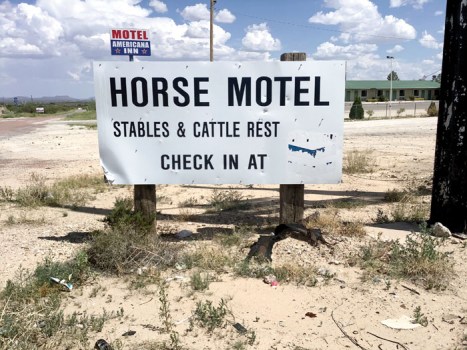 Freeze spotted this sign in Sierra Blanca this afternoon. Photo by David Freeze, for the Salisbury Post. 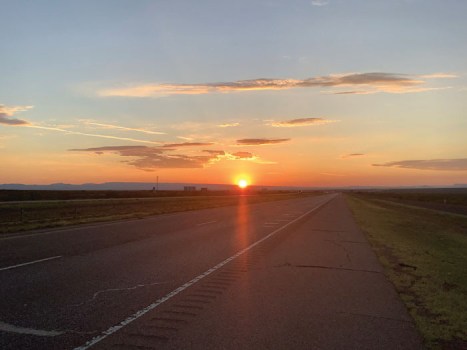 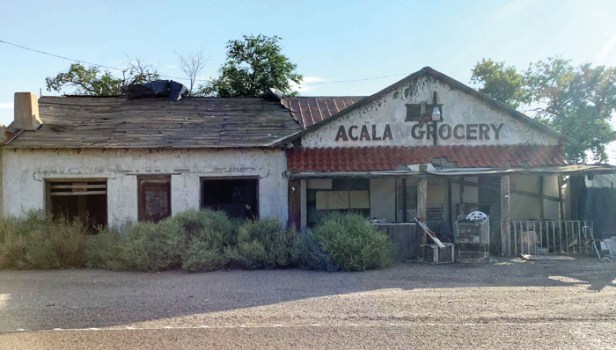 Most of the early morning ride was in the agricultural area with no traffic and lots of abandoned buildings and homes. Photo by David Freeze, for the Salisbury Post. 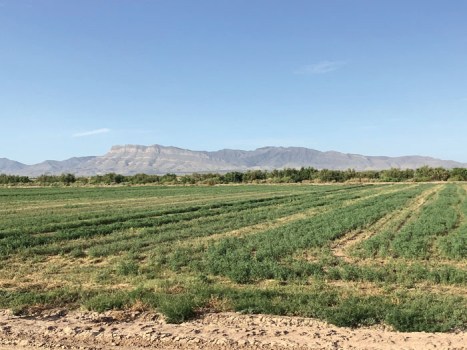 Just on the other side of the lake is Mexico. Freeze saw border patrol agents all morning. 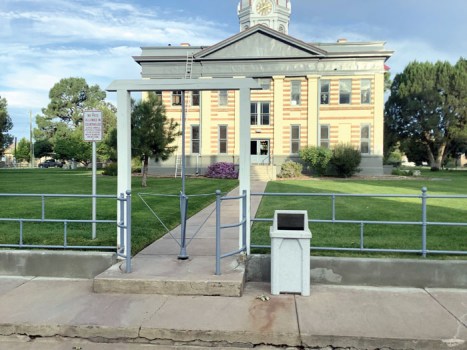 The old courthouse under renovation in Ft. Davis, Texas. Note the turnstile at the sidewalk. Photo by David Freeze, for the Salisbury Post. 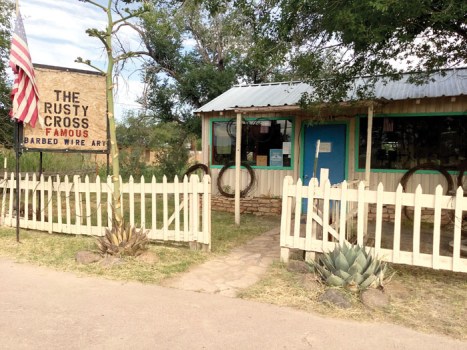 Fort Davis is an interesting place. A Main Street with lots of quirky shops. This store is a barbed wire art dealer. Photo by David Freeze, for the Salisbury Post. 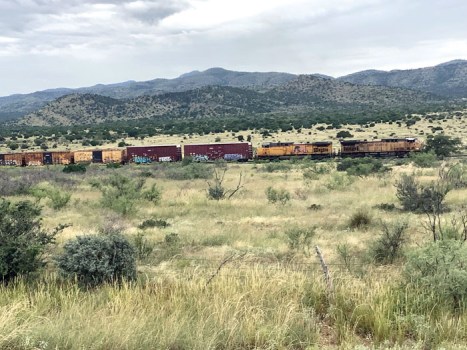 Freeze loves to see trains along the roads. That means that the roads are minimally hilly. He saw this train on the way into Marathon, Texas today. Photo by David Freeze, for the Salisbury Post.

When I chose the Southern Tier trip, I saw some of the challenges and thought that I had done those things before. But as the first 15 days have developed, with the topper being today, I wouldn’t want to have missed any of it. The heat and lack of supplies has been part of the whole trip. In fact, I’ll try to explain why I do love these adventures.

Today had a particular challenge. I had to cover close to 100 miles and get to Van Horn, Texas, the jumping off point for yet another big challenge for tomorrow. I got in late last night, got my writing, planning and shower done way late too. Just as I shutting down for the night, I realized one of the two straps that hold the bike cyclometer (juiced up odometer) to the bike was broken. I had a pull tie and only one, but it was defective. If the cyclometer fell off, I would not be easily able to keep up with my mileage. I went to sleep with about 4 1/2 hours until I would start today.

Up early, I tried the truckstop across the road, the county rescue squad in Fort Hancock and a 7 Eleven. Nobody had one, but the woman at the rescue squad suggested trying the tire place.

I had been riding on flat roads within site of Mexico for the first three hours of the morning. Border patrol was on hand in several places. I saw some of the wall early but as I traveled east, but then it had disappeared farther on. There were lots of abandoned houses and other buildings, and very little traffic!

Needing to fix the cyclometer binding, I did ride up to the tire place and happened to ask a county deputy if I could ride on the interstate. Another had told me yesterday that I could, and this one confirmed the same. The tire place had the pull ties that I needed and I secured the odometer as it should be.

My Adventure Cycling map called for us to ride the interstate a little later in the morning, but after the Arizona State Trooper didn’t want me on the freeway, I made sure. I rode it the rest of the way today and will start on it again tomorrow. Early on, I had a tailwind and flat ground. The only towns all afternoon were Sierra Blanca and Van Horn, where I am tonight after 97 miles.

Riding on the interstate is Ok because the shoulder is usually smooth and the Texas 80mph traffic doesn’t bother me. In this area, the traffic isn’t very heavy. Late this afternoon, some storms started against the mountains and changed my tailwind to a fierce headwind. I climbed the last mountain of the day and wind was less on the other side. The time zone changed to Central just before I arrived in Van Horn. My plan was to stay at the Knight’s Inn that I called last night, but the desk person wouldn’t give me the promised price. I had lots of choices and half a block away will spend the night at the Value Inn for even less money.

Already, later than I hoped to be in the room because of the weather, I found a great convenience store where I bought ice cream, pizza and a sandwich, plus three ice cups and some pineapple. I am always so hungry.

Tomorrow’s challenge includes midday climbing to over 6,000 feet one more time. It’s 90 miles with no supply points and no motels, so I have to carry lots of stuff tomorrow and make it to Fort Davis. It will likely be a very long day!

Join me for a report tomorrow. Bet something interesting happens!

Day 16: There are good things even on bad days!

My ride started out in Van Horn early, but not early enough. I was in the Central Time Zone and had to wait forever to get enough light in the sky to ride on Interstate 10. Even with another great burrito for breakfast, I felt behind all day.

I watched the sun rise while facing it amid light traffic and cool temperatures. While my map called for 89 miles without services, there was a truck stop at 20 miles. Nothing afterwards for the rest of the day. I was hauling extra water and food.

My only goal of the day was to cover the 89 miles between Van Horn and Fort Davis. I knew it had a bunch of climbing, but I had no idea how much. From 37 miles on, I climbed and climbed, always on a rough road. Near the end, I wanted to see the McDonald Observatory. Top elevation was 6,000 feet plus.

There was so much climbing that I fell behind timewise. I saw the observatory from a distance only, as I was still riding at 9 p.m. More on that later. I will get my story done, grab a shower and then turn in. It has been a very long day, but something good happened near the end.

Mindi Falls stopped and asked if she could take me to Fort Davis, the next town. In fact, the only town for miles. I had a sort of reservation at an unusual motel. Mindi got me there in time, just in time as he was about to close for the evening. I really enjoyed meeting her. she prayed over my ride just before leaving.

Only 86 miles were completed since Mindi picked me up in the dark. I will go early and ride that part tomorrow morning, then head on at least to Marathon. The supply point issue is going to be big for several days to come.

This morning as I started to ride, I thought the weather was the best yet. Clouds came and went, helping to keep the temperature down. Kent and Fort Davis were the only towns. There was no cell service and no radio reception. But I did get caught in a brief downpour.

So, I am going to grab a late shower and hit the bed. I need to do both!

Thanks for riding along. See you tomorrow!

It was very late last night when I got to Fort Davis, and nearly 10 p.m. when I got in the room. Most everything still got done, but I will admit to dozing off near midnight when I was proofing that day’s update. Knowing that it would get daylight later this morning, my alarm got a snoozing, something I never, ever do.

I rode back through town this morning and out on part of the route that I missed last night when Mindi Fires picked me up. I didn’t realize that had I kept riding, I would have had a huge hill to climb coming into Fort Davis. In a day that seemed to have no ending, I would have missed my motel had she not picked me up. The owner said he was about to close. This was one time, in retrospect, that I did the right thing getting that ride in the pitch dark.

I did take the time to plan today’s route last night. For the next few days, there are serious supply issues, so many that I am having trouble sorting through them. My plan today was to ride the 56 miles to Marathon, so small that it has only about 500 residents. But it has at least a couple motels, the one that I chose is the Marathon Motel and RV Park. I have a very nice room but major problems with WiFi. I am going to submit the story and photos and then ride downtown for some food. Much better than I did last night.

Recapping today, I wanted to see what Fort Davis looked liked and found it full of interesting shops and restaurants. It also has a unique attraction, the Fort Davis National Historic Military Site. Fort Davis is the best preserved frontier military outpost. It has lots of buildings and I could have spent have a day there. The fort was used from 1854 to 1891.

Attached to my motel was a deli and sort of community gathering place. This place had my favorite egg, cheese and potato burrito ready made. They are so good! My favorite store was the one selling barbed wire art. The old bank and courthouse, both still in use, were spectacular. Someday, I will come back and spend a day there.

I had yet another tough climb up and out of Fort Davis, and continued on U.S. Hwy. 118. The scenery was wonderful, the grading of the road and its shoulders were not. I also realized this morning that Texas in this area looks just like Montana. Always mountains on the horizon, appearing to be miles away.

My only other town today was Alpine, a beautiful and busy place but still at only about 5,000 people. Nice people and while there, I called and made the deal for my room tonight. It was 32 miles from Alpine and I rode it in one minute less than three hours. One significant hill in the middle, but lots of good riding on U.S. 90. I noticed a bigger presence of border patrol agents in the area. My mileage today was 56.

I still stop at every historical marker, and I saw one border agent hiding there. They always seem to have long sightlines where anyone crossing the road would be seen.

Just as today, if I had continued past Marathon, I had 55 more miles to go for a place to stay and supplies. Tomorrow may be similar but I will research it tonight.

Mindi Fires is now a significant sponsor for my coast-to-coast journey, and I want to  welcome Wayne Cobb to the group as a new sponsor.

A cloudy day, with a little drizzle, never got past the low 80s. Hoping for another like it tomorrow. Join me back here to see what happens!