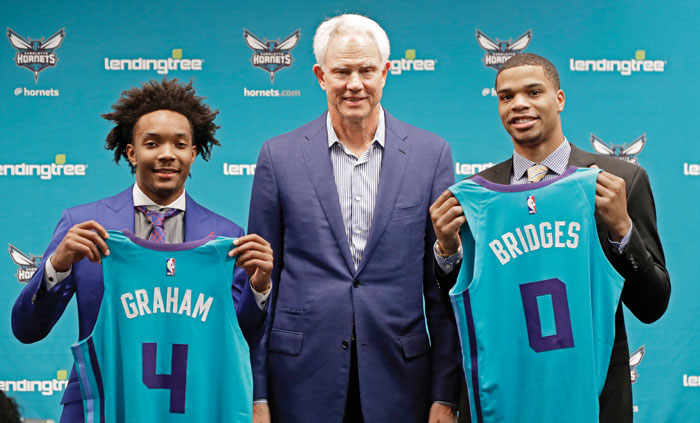 Charlotte Hornets general manager Mitch Kupchak continues to to use the draft and other measures to get a force at center. (AP File Photo/Chuck Burton)

But he’s not necessarily worried.

Kupchak said the plan is to develop the team’s three young centers in hopes that at least one blossoms into a star in the next couple of years.

Kai Jones was selected 19th overall by the Hornets this year out of Texas. The team also selected centers Vernon Carey Jr. from Duke and Nick Richards from Kentucky in the second round in 2020.
The Hornets acquired veteran center Mason Plumlee — and the two years, $16 million remaining on his contract — in a draft night trade with the Detroit Pistons. While Kupchak said it “would not be a bad assumption” to anticipate Plumlee will start this season along with guards LaMelo Ball and Terry Rozier and forwards Gordon Hayward and Miles Bridges, it’s pretty clear Plumlee is viewed as a temporary fix.

“Our thought process was to get somebody that’s a veteran under a reasonable contract and also give these young guys a chance to grow a little bit, and maybe a year from now they’re going to be the guys that maybe we should’ve pursued this year in free agency,” Kupchak said.

By acquiring Plumlee before free agency, the Hornets essentially took themselves out of the market for free-agent centers like Richaun Holmes, Jarrett Allen, Daniel Theis and Nerlens Noel.

Kupchak said the Hornets didn’t want to spend a lot of money in free agency on a center when the answer could be right under his nose.

Carey and Richards saw minimal action last season with the Hornets, but both had success with their G League team, the Greensboro Swarm. Richards averaged 17 points and 10.3 rebounds, wile Carey had 16 points and 9.4 rebounds per game.

The Hornets entered free agency already thin at center with Cody Zeller and Bismack Biyombo both unrestricted free agents. Zeller has since signed with the Portland Trail Blazers, while Biyombo remains a free agent.

Kupchak said getting Plumlee on draft night was partly a “bird in hand” strategy because he didn’t know if the Hornets would be able to lure a top-notch center away from another team — or be able to afford him — even if they wanted one.

“Going into free agency there are 30 teams and there were a couple of centers available, but you don’t know where you rank,” Kupchak said. “You don’t know what the marketplace is going to be like once free agency begins, so there’s a lot of uncertainty going in. … We felt we got somebody (Plumlee) with two years remaining who’s a proven veteran on a good financial contract.”

Kupchak called Plumlee a “very unselfish” player who can help at both ends of the court.
He nearly posted a double-double last season for the Pistons, averaging 10.4 points and a career-high 9.3 rebounds.

“When the trade came up to get Mason, we feel we’ve added a player that rebounds the ball, gives us some rim protection, play makes a little bit. He’s pretty good at the top of the key passing the ball and getting players involved,” Kupchak said.

Kupchak said the “heavy lifting” is pretty much done and he doesn’t expect anymore significant moves this offseason.