David Freeze: Crossing America, one convenience store at a time 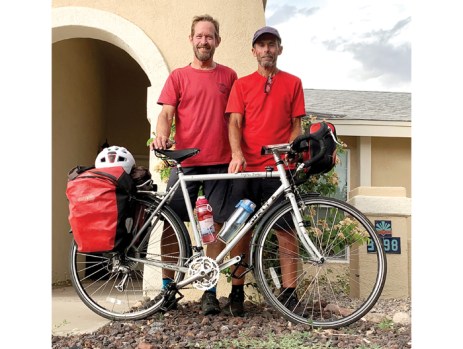 Freeze and Joe Myers, who has family in Rowan, after arrival in Las Cruces. Myers rode the last 19 miles in with Freeze. Submitted photo. 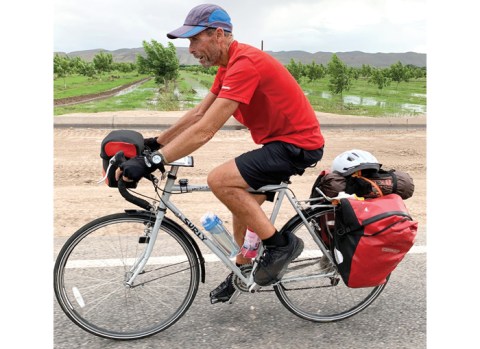 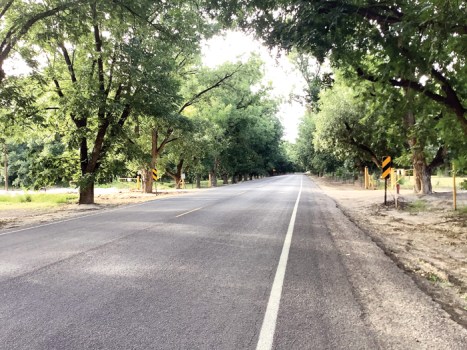 This canopy of Pecan trees went on for miles today after Freeze left Las Cruces. Freeze sold more than 100 cyclists on Sunday morning in this area. Photo by David Freeze, for the Salisbury Post. 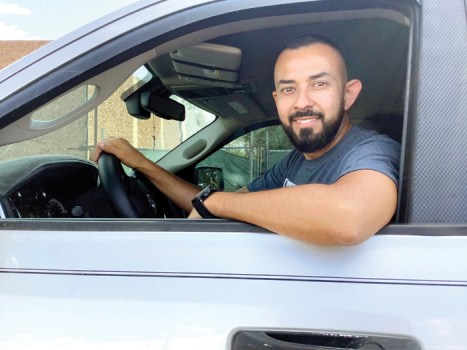 Carmelo Morales of El Paso stopped to talk to Freeze as he neared Clint, Texas late this afternoon. Carmelo moved to El Paso from Los Angeles and is an avid cyclist. He even offered Freeze the right size tire tube for his bike as part of the conversation. Photo by David Freeze, for the Salisbury Post. 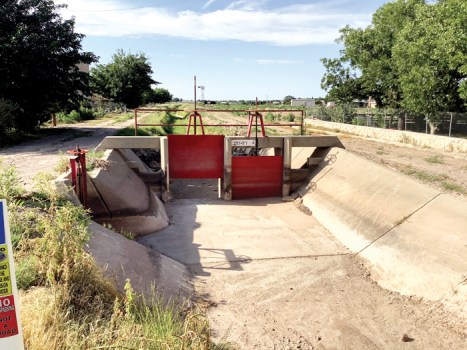 This irrigation canal has gates that allow the water to flow. Pecan trees are on both sides and are sometimes flooded with water from the Rio Grande. Photo by David Freeze, for the Salisbury Post. 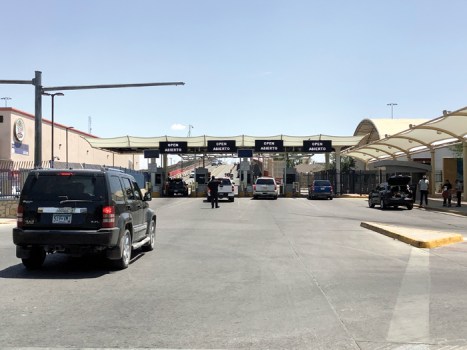 An entrance into Mexico from El Paso. There were two entry points like this that Freeze saw on Sunday. Photo by David Freeze, for the Salisbury Post. 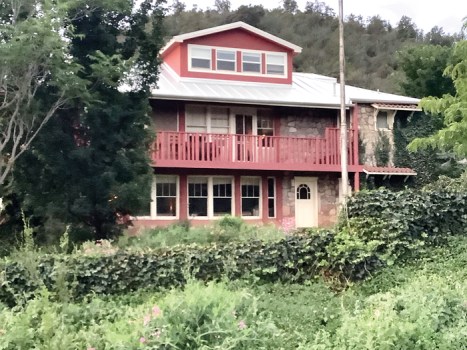 The Black Range Lodge in Kingston where Freeze spent Friday night after arriving in the massive thunderstorm. Photo by David Freeze, for the Salisbury Post. 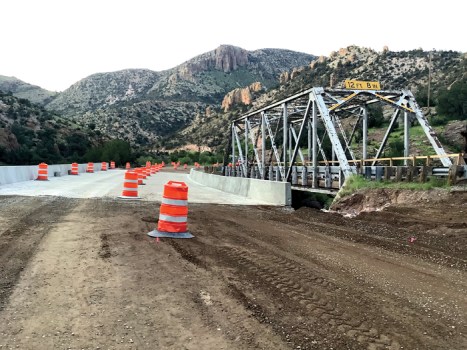 Road construction and mountains on Freeze’s trip towards Hillsboro early on Saturday morning. This was on US 152. Photo by David Freeze, Salisbury Post. 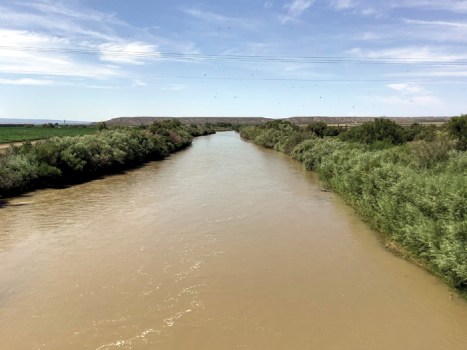 Freeze’s first view of the Rio Grande River on Saturday morning. He followed it today and will again tomorrow. Photo by David Freeze, for the Salisbury Post.

Editor’s note: David Freeze, who lives in Rowan County, is biking from the West Coast to the East Coast along the southern border. Email him at david.freeze@ctc.net.

After a very pleasant sleep at the Black Range Lodge in Kingston, New Mexico, I headed down the mountain for almost 9 more miles to Hillsboro, which has a thriving restaurant and a lot of beautiful older homes. It was very quiet as I rode through.

Then, on to Caballo, where there is a huge reservoir and a nice convenience store. The store clerk told me that in September and October there will be several hundred cyclists stopping by his store on my same route. Next came Arrey, the first store with ice for my drinks, then Derry, Garfield and Salem.

Next was Hatch, where I could spent lots of time. There was plenty to see, and it reminded me of a Route 66 town. Hatch is the “Chili Capital of the World,” and it was booming. Radium Springs was less exciting, but that was just after Joe Myers joined me for the last 19 miles into Las Cruces. I am staying in Joe’s daughter’s house tonight. He is from La Luz, New Mexico, and his mother, Catherine, lives in Statesville. Joe’s aunt, Margaret, and her husband, Bob Harris, live on High Rock Lake.

This is my last night in New Mexico. Today, highlights included lots of crops planted along the Rio Grande, including peppers, soybeans, corn and vast amounts of pecan trees. I saw one man screen for gold from a creek, something I would like to do. Something I didn’t see was the town of Truth or Consequences after the route veered away from it. Sounds like a great name for a town.

Today’s ride totaled 91 miles, but it finished with a tailwind, clouds and the pleasant ride with Joe. My legs felt terrible this morning, but they came around in the afternoon.

I’m excited to head for Texas tomorrow, although it will make up nearly 1,000 miles of the whole trip. The heat wasn’t as bad today, but will return. Keep riding along and sending those prayers!

Today was very busy, but it fell just short of my expectations! I left the home of Joe and Grace Myers at first light this morning. About 7 miles into it, I found a convenience store that had a woman making breakfast burritos by order and I got one. It was fantastic with egg, cheese and potato. She was out of tomatoes, or I would have had that too.

Afterwards the riding began in earnest, I rolled through Mesilla and turned down an offer for free pancakes at a church. I pedaled through 8-10 miles of pecan tree canopy with plenty of other cyclists out there too. I then rode through several interesting Hispanic towns named San Miguel, La Mesa and Chamberino — all that on U.S. 28. The sweet smell of hay being processed made for an even better day. Then, I followed the suggested route of taking a 7-mile bikeway into El Paso, before attempting to follow two sets of directions to cross the east side. I got lost once, but I asked a border guard at one of the Mexico entrance points for directions. He pleasantly helped. Then, I had to deal with a detour before finally getting on U.S. 20 East for the rest of the afternoon.

Traveling though the center of El Paso was very crowded and hilly. Plus, I saw no bike lanes in that area. I did not enjoy that part, especially the endless intersections. Gradually as I moved on east, there were Socorro, Clint and Fabens. I am spending the night next to Interstate 10 at the Fabens Inn Motel. I paid too much, but it was the only option for 25 more miles. All this after 87 miles today.

All afternoon, I kept refueling at convenience stores, and it was hard to delineate one town from another. With daylight running out, I gave up on my plan to go way over 100 miles. Storms were in the area too. It will be many days before I have lots of supply points available. They begin getting scarce tomorrow.

I did have a very pleasant conversation with Carmelo Morales of El Paso who said he would doing this, too, if he didn’t have to work. He is the first person I have ever met that offered me a tire tube that fit my bike out of his truck. Carlos gave me plenty of insight on the road ahead.

Starting tomorrow, I am going to be limited in supply points and places to stay. But still, I have big plans for the day. Big ones too for the next day. I will explain all of this tomorrow.

I was reminded today how the most famous river in the area keeps showing up, same as the Ohio River did on my Underground Railroad adventure. The more I see the Rio Grande, the more I understand how the local economy relies on it. Agriculture is everywhere!

Thanks for riding along today. I am going to start on some ice cream in an effort to keep the massive calorie burn fueled.

See you tomorrow with possibly yet another great story!