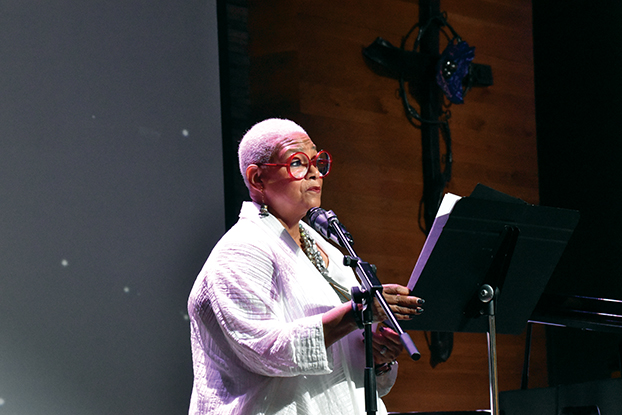 North Carolina Poet Laureate Jaki Shelton Green brought the audience in St. John's Lutheran Church to their feet with her poetry reading. She was one of several artists who performed in the church Saturday during the final event of the weekend surrounding the dedication of a lynching marker in downtown Salisbury. Ben Stansell/Salisbury Post

SALISBURY — Looking at the crowd gathered inside St. Luke’s Episcopal Church Saturday morning, Deborah Whitfield has a simple explanation for why she drove from two counties away.

“I’m here because you guys beat us,” Whitfield told the crowd.

A Rowan County native, Whitfield traveled from Mecklenburg County to Salisbury to participate in a community dialogue session. The event, hosted by Actions in Faith & Justice and the Equal Justice Initiative, was one of three surrounding the dedication of a historical marker memorializing six people lynched in Rowan County during the Jim Crow era. The community dialogue session was followed immediately by a performing arts celebration with the theme of “Strength, Hope, Resilience” at St. John’s Lutheran Church.

The culmination of years of work, the lynching marker was placed outside of the Oak Grove-Freedman’s Cemetery on Friday. A service dedicating the marker was held at Soldiers Soldiers Memorial AME Zion Church and featured a keynote address from North Carolina Poet Laureate Jaki Shelton Green.

The marker, donated by the EJI, is the first memorial of its kind in the state of North Carolina, but there are others being planned. Whitfield is working with the Charlotte-Mecklenburg Community Remembrance Project and the EJI to accomplish a similar goal.

Whitfield was one of several people who spoke during the community dialogue session, which was led by EJI’s Kiara Boone and Bre Lamkin. The duo traveled from the organization’s home base in Montgomery, Alabama, to participate and help with the weekend’s events.

Founded by Bryan Stevenson in 1989, EJI provides legal representation for people who have been illegally convicted, unfairly sentenced or mistreated in prison. The nonprofit organization also operates the Legacy Museum and the National Memorial for Peace and Justice, both of which are dedicated to recognizing the violence and discrimination experienced by African Americans.

“At EJI, we are committed to telling the truth about our past, naming specific injustices and working with each other to find ways to identify these meaningful solutions,” Boone said. “We believe that, in order to get to that reparatory, healing, justice, reconciliation, whatever word you are using, that we have to do the difficult, challenging, uncomfortable work of talking about and unearthing this past.”

After Boone and Lamkin spoke and showed a video, the discussion began. One audience member asked Boone and Lamkin to provide more information about lynchings and racial violence involving children in Rowan County.

Boone referenced Harrison and James Gillespie, ages 13 and 11, who were lynched in Rowan County in 1902 and are memorialized on the newly-installed marker. She said that violence toward women and children was common during the time.

“This legacy of not seeing children as children is what we’re talking about and it goes all the way back to the genocide of indigenous people, to slavery, to lynchings, Jim Crow segregation,” Boone said. “Unfortunately, as these massacres, as these mob lynchings were happening, women weren’t excluded, children weren’t excluded. No one was. That’s why we talk about it as racial terrorism and racial terror violence because it impacted the entire community.”

Rather than ask a question, Jim Ferree stood up and said that lynchings are still occurring today in the form of incarcerations. 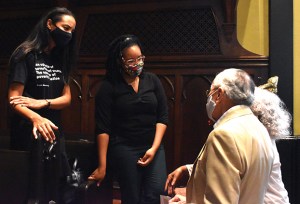 At the conclusion of the dialogue session, many of the audience members walked over to St. John’s Lutheran Church for the performing arts celebration, the final event of the weekend.

The hourlong performance was organized by the Actions in Faith & Justice with the help of Sabrina Harris, an artist and poet who owns Vibes Arts Incubator.

“My goal was to bring the talent we have in our community together as an act of celebration for the marker that went up yesterday,” Harris said. “It really was a showcase of all of our talent in our community.”

Members of The Reach Church’s choir performed songs of praise and the Younique Starz Dance Team performed a routine. 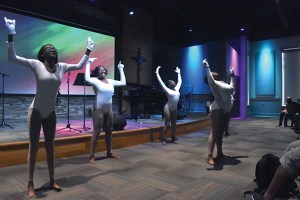 Dancers from Younique Starz Dance Team were among the performers who showcased their abilities. Ben Stansell/Salisbury Post

Green delivered a poem that brought the audience to its feet and spoke about people connecting with one another to move forward.

Jah Smalls, who is a poet-in-residence at the Center for Faith & the Arts in Salisbury, performed a piece that he’d written less than a day before the event. Smalls said the poem was about telling the story of America from the African-American perspective. 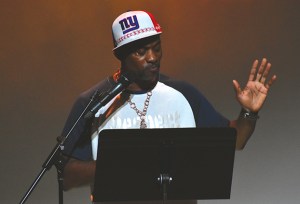 During the arts celebration, Jah Smalls performed an original poem he’d written less than a day before. Smalls said the piece was about telling the story of America from the African American perspective. Ben Stansell/Salisbury Post

Harris performed a piece of her own that concluded the event with an uplifting message: “Never forget that the sum of us is the strength of us.”

“The piece is about unity,” Harris said. “It’s about remembering our past, but celebrating our future.”

Rev. Olen Bruner, co-chair of Actions in Faith and Justice, said the weekend’s events were successful in stirring Salisbury’s consciousness.

“We have begun making our first steps for a new and better Salisbury,” Bruner said. “That’s what it’s all about.”

The Bullhole: Park rises from a place to be…