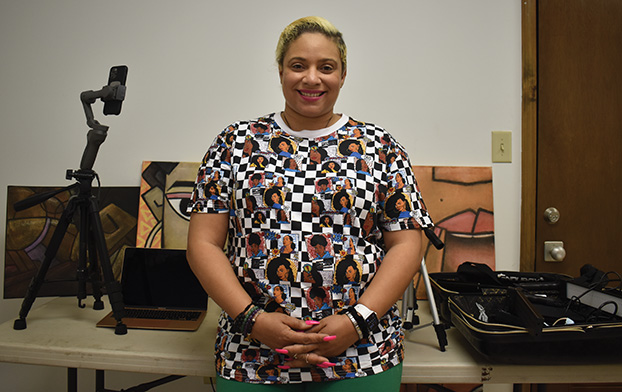 Sabrina Harris plans on using her new Vibes studio as a place where she can utilize technology to promote local artists online. Ben Stansell/Salisbury Post

SALISBURY — Sabrina Harris still gets chills when she watches the video of Ashley Ellis belting out notes under the white lights in the former Vibes studio on South Fulton Street.

It was during an open mic night in early January 2020 and the studio was packed with people who were there to watch talented poets and singers perform.

Giving artists a platform was exactly what Harris intended to do when she opened the art incubator in 2019.

“The goal was to merge different ranges of artists, whether they were just getting started or if they’d been around for a while, to share information and to grow the arts community,” Harris said.

In addition to renting the studio to artists, Harris hosted events and bi-weekly open mic nights that featured five-piece bands and an ambiance typically found in comedy and poetry clubs in large cities.

A few months after Ellis performed that night, Harris found herself back in the studio late at night. Except this time, there was no crowd, no band. Bathed in the light coming from a single TV, Harris was hunched over her sewing machine late into the night. A seamstress by trade, she was stitching together masks that she donated to healthcare workers who were helping with the COVID-19 response.

With the world in the grips of a pandemic, Harris was forced to cancel her open mic nights and wasn’t able to host collaborative art events.

“Once March hit, the landscape of what I was doing came to a screeching halt,” Harris said. “There were no people coming in. Everything was at a standstill.”

Almost a year later, Harris and her husband were in the studio again. They were there on New Year’s Eve to ring in 2021 by moving everything out. With rent payment piling up and the arts community still forced to keep its distance, Harris had to close the studio on South Fulton and rethink the future of her venture.

Instead of bringing artists together, Harris decided that she’d bring people to them by promoting their work online.

“It’s about giving them a digital footprint and creating enough buzz where people will buy their work,” Harris said.

While the South Fulton Street location of Vibes boasted a large window near a prominent road, the new Vibes studio has more walls and is farther back from the street, which makes it more conducive for recording sound.

That’s something Harris plans to do more of in the near future.

“I’m going to do more interviews with artists and try to drive traffic to their (website) pages,” Harris said.

From the time that she was forced to cancel most of the in-person events at Vibes last spring, Harris started learning how to record and edit video and sound, something she had little experience in besides what she learned decades ago in a high school broadcasting class.

“I had to study,” Harris. “I’ve been self-teaching and reaching out to people who I know who are in the business. I’ve been asking them everything, even if I bought the right cords for equipment.”

She now carries with her a black suitcase full of tripods, light bars and sound mixers. In the spring, Harris launched a YouTube channel called Vibes The Creatives Network and has been using her website to promote Black artists and businesses. 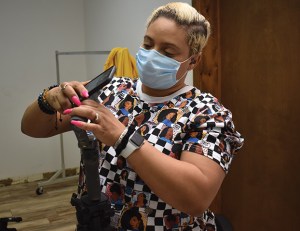 Sabrina Harris has taught herself how to use tripods, sound mixers and other technology to record herself talking to artists. Ben Stansell/Salisbury Post

One challenge that Harris had to face is editing the sound for her videos. Since she is hearing impaired, she had to have others help her through the process. But that hasn’t prevented her from publishing content about artists online.

The new studio, where she plans on doing interviews and shooting videos from, is currently undergoing renovations and likely won’t be ready until at least May.

When the new Vibes space does open, Harris hopes it becomes a place where she helps promote an art community that has struggled during the pandemic.

The new location will also be a place for Harris to host events. Until the pandemic subsides, she only plans on having baby showers, children’s birthday parties and other small, family events. There will still be artwork from local artists on the walls and Harris anticipates having art gallery showings with social distancing measures in place.

Eventually, her goal is to start hosting open mic nights again. Artists who want to collaborate with Harris to promote their work can look for “calls for artists” on the Vibes Facebook page.