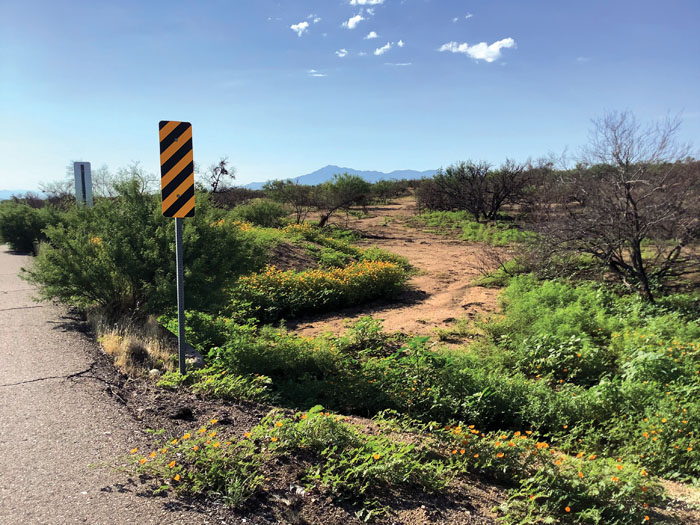 First flowers in the desert. Photo by David Freeze, for the Salisbury Post.

First, just a little bit about last night left unsaid. I got to the room very late after struggling with big climbs all day. When I finally got to the Belle Air Motel, I found the perfect small room at a great price and some high tech, too. I have never seen a shower that the water comes out of a wide and flat shower head at the ceiling. The water totally covered me because I didn’t know how to adjust it. Might have to get one of those for home.

Today, I left Globe on another severe hill up and out of the beautiful little town. My favorite town of all I’ve seen on this trip. I spent the whole day on U.S. Hwy. 70, with most of the bike lane in poor quality. First stop after massive rollers, endless ups and downs, was Peridot. The only store in town was all but empty and had a sign on the door, “No mask, no entry!” So I skipped it and rode on. A small store listed on the map didn’t materialize and I began to worry about water.

About 23 miles later, while riding in the San Carlos Apache Reservation, I finally found the listed store in Bylas, named after a long ago chief. Again, “no mask, no entry” was posted on the door but others were going in and I did too. I got ice, water and a drink, along with a cookie. Not a single person smiled to anyone in the store, so I was glad to leave.

While hot, the terrain eased off some and so did the heavy traffic. I passed through Geronimo, nothing but a sign and a few older buildings. 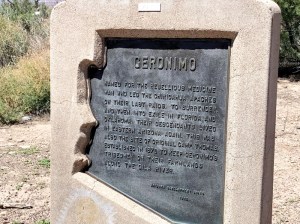 Geronimo has a little settlement still named after him. The ride this afternoon gave Freeze a chance to explore more about Geronimo and Ft. Thomas. Photo by David Freeze, for the Salisbury Post.

Then it got better, the store in Fort Thomas had a display on the Indian warfare era. Very interesting, especially the old pictures of the fort itself. After Geronimo’s final surrender, the fort was used to make sure that his followers stayed at home along the fertile farmland next to the Gila River. All this area had farming with hay and soybeans looking great.

I then rode through Pima and Thatcher, both squarely in the farm belt. My final destination was Safford, where after 80 miles, I will spend the night at the Budget Inn. It’s 99 degrees outside, but maybe was hotter earlier.

Still, it was a great day! Here’s how so many of my favorites came together. Anytime I can ride along a river and a railroad track, it means that the area is flat. I had a tailwind too and the best bike lane all day, plus reasonable drivers. I’m certainly out of the desert, at least for now.

Finally, I have some challenges beginning tomorrow with almost non-existent supply points. Long rides with just what I have. I will plan it out tonight.

Thanks to Gear for Races for again sponsoring my ride. Luis Villareal has supplied Rowan’s shirts for years.

See you back here tomorrow for what happens on the unsupplied ride!