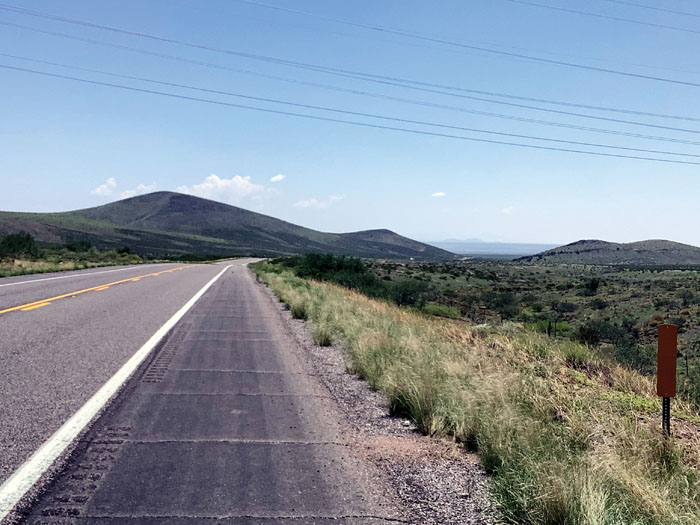 Miles and miles of this today, ending in Lordsburg, New Mexico. Long straight roads, heaving climbing in the morning and much more level this afternoon. Photo by David Freeze, for the Salisbury Post.

Last morning in Arizona drags on, then New Mexico in the afternoon.

People sometimes ask what makes a nice evening motel experience. Last night, I was at the Budget Inn in Safford, Arizona. The owner was genuinely interested in my ride, plus he made sure I knew about the food choices close by. The room was spotless, with plenty of room for the bike and a good supply of ice. And it was quiet! A few nights on the road have been ruined by loud neighbors.

The owner told me yesterday that the route ahead for today only had one small hill and the rest was flat. I found it one long hill for 35 miles, with a downhill finally for the last five. Very slow, I was only able to average 6 mph. That first 40 miles of the day had no supply points.

About noon, I arrived in Duncan, where the only convenience store there had plenty of business. With no supplies available on the route for the hot afternoon ride, I bought plenty of water and even went back twice. My card was declined the second time, with an email asking if the charges were legitimate. The cashier told me that the road ahead was mostly flat, something that I hoped was true but would not count on it. She was right.

As I write this, a massive storm is happening outside. Power has gone off twice already and I can hear the wind howling. All this on a day with virtually no clouds and only a 10% chance of rain. 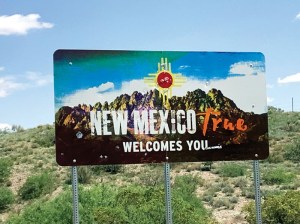 So far, I am safe inside the Holiday Motel in Lordsburg, New Mexico. My food came from Dollar General. I ate a quart and a half of ice cream as soon as I got to the room, and have used plenty of good ice too. It was hot today.

Two unusual things from this morning included historical markers at the sites where settlers were killed by the warring Apaches. The other thing actually got worse all day. Persistent flies were on me even when riding, and were worse when I stopped. First day for this occurrence. Today had 78 miles.

Tomorrow will start the serious climbing on up to just over 8,200 feet. I will analyze as I go because many services are not available at higher altitudes. And Texas is just a few days away.

Join me tomorrow night from who knows where. I just know I’m climbing again.