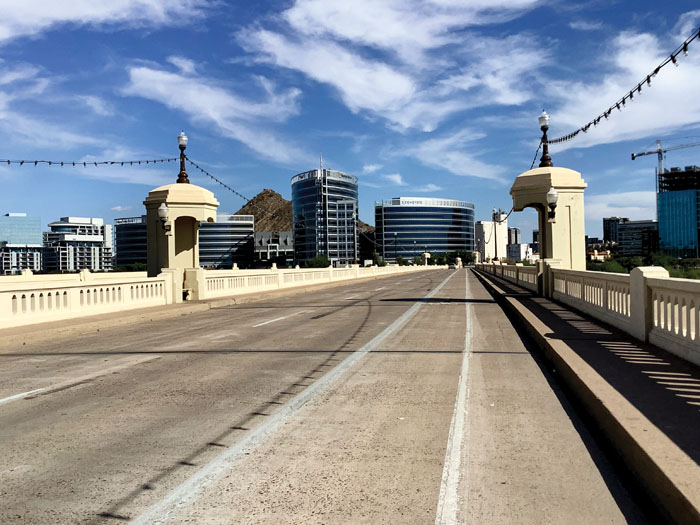 A very nice bridge and big new buildings are the Gateway to Tempe in Arizona. The bridge is over the Salt River. Photo by David Freeze, for the Salisbury Post.

I met first light this morning on the way out of Wickenburg, Arizona. I knew my maps called for a mostly flat and somewhat downhill ride. Two McDonald’s Egg McMuffins, less the sausage, hit the spot. A low in the upper 70s felt even a little chilly on the bike.

I rolled through Morristown with no services but a very good road. Then my plan of getting ice 10-12 times a day began in Whittmann.

Next, the suburbs of Phoenix began, including Surprise, Peoria and Glendale. With Phoenix, they all total over 2 million people. My maps called for me to follow various trails and canal paths, and not see the city. After a couple of miles of useless up and downs meant for mountain bike riders, I got off the trails and hit the streets. It was well over 30 miles of riding across the city with multiple dismounts at traffic light, well over 100 at least. A total of 84 miles felt strong.

At least one source had the high in Phoenix at 107, but I never got overheated. My phone did. It got all confused and wanted me to make wrong turns on the way to the Econolodge where I am spending the night. In my 12th stop of the day for ice, I actually placed the phone on top of a bag of ice. The phone shut down for temperature twice.

One of the nicest things today happened when I was riding through one of better neighborhoods with colored gravel for yards. A very nice woman stepped out of her garage and helped with directions and with a very cold bottle of water. From Kentucky, she had recently moved to Phoenix to help her health with the arid climate. She told me that natives call the current weather “monsoon season” because it is the only time of the year when it is humid. I heard a weather guy on TV last night say that the humidity was lifting out.

Late this afternoon, I saw the University of Arizona in Tempe, the downtown area and rode into Mesa, where I spent the night. Nothing really unusual happened today, until I got to the motel. No ice, no chair in the still-nice room, a cash damage deposit required and more.

Tomorrow starts my second map sequence with another round of significant climbing. It will be uphill all day. And over the next 400 miles, every town is small and some spaced far apart.

Dick and Jean Richards are back as significant sponsors of this ride, and thanks to them for their continued support.

On we go, the first week done. See you tomorrow with tired climbing legs!

David Freeze is riding from the West Coast to the East Coast along the southern border. He was still riding Monday night and hadn’t sent in his latest dispatch, which will appear online and in Thursday’s print edition. Email him at david.freeze@ctc.net.