Gotta Run: Molly Connor is glad to be back on the road 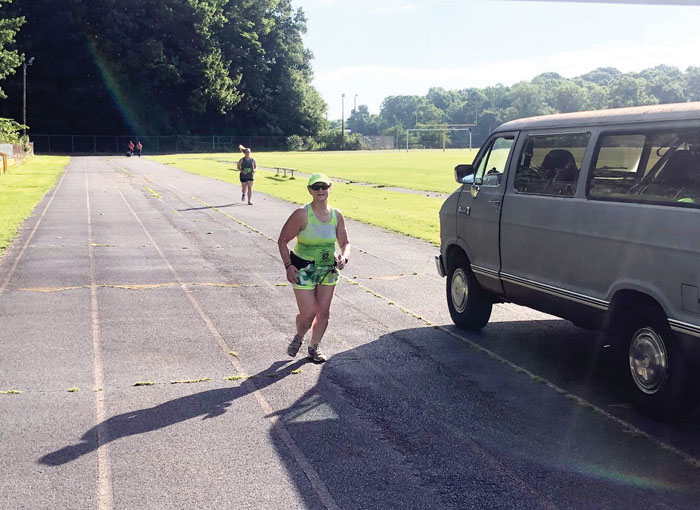 Molly Connor is one of my longest-term friends in running. She was very active in Salisbury events for many years, either racing or volunteering. Molly has been back at the races recently and here is her story.

Molly said, “I started running shortly after I met my husband Bob in 1986. We are both from Maine. He was an avid runner, so I started running with him. We did races every weekend, sometimes two or three, all year long. The weather never stopped the races there. We ran through it all, snow and ice included, and traveled around the state doing races wherever we could find them.”

The Connors moved to Salisbury in 1992, right after Molly finished her registered dietician internship in Florida. Salisbury was the only VA hospital on the East Coast that needed a dietitian at that time. Molly said, “Being from Maine, Florida was too much of a change. I missed the different seasons. I looked at VA hospitals within the Virginia, S.C. and N.C. areas, then worked at the VA here in Salisbury until I retired in 2017.

Other than husband Bob, Molly’s family includes son, Bobby, his wife Jenifer and four terrific grandkids, Braedan, Nola, Eelam and Ember. Her mom still lives in Maine, and Molly usually spends July and August with her and three sisters and four brothers. One brother has done two marathons, Disney and the Marine Corps, and remains the only other family member into running.

Molly loves to travel. She said, “Probably the most memorable was going to Greece to run the original marathon.  Amaryllis Torres, Linda Alexander and I traveled to Greece in 2008. They allowed the slower runners to start an hour before the elite runners. At about mile 6, there was a something happening behind me, I didn’t realize until too late, but I could have gotten a picture of me running with the Kenyans for all of 5 seconds.”

She continued, “I did the Marine Corps Marathon several times, most memorable was after 9/11. I saw the gaping hole in the Pentagon. It was an emotional race, runners were crying and slowing down. Armed military were guarding the course from start to finish. I also ran the Marine Corps the year the sniper was randomly shooting people in the Washington area. Bob didn’t like the idea, but I told him I was safe. If a sniper was shooting runners, he would either shoot those out in front or those bringing up the rear. Since I was in the middle of the pack, I would not be a good target. They caught the guy a couple of days before the race.”

Molly’s biggest challenge had to do with Stage 4 breast cancer, diagnosed in July 2012. She said, “I started chemotherapy within days of the diagnosis and finished just before Christmas. The scan at that time showed the cancer was gone. I had a lot of support from friends and family during those months. People were praying for me here, back in Maine, and actually around the world. Surgery was still needed to remove the places where the cancer was, but it wasn’t the extensive surgery that was discussed back in July. After surgery, I did a round of radiation. Finally after a year, I was finished with all treatments. I kept a positive attitude throughout everything, and my doctor told that was more than half the battle.”

Molly, now 64, remains cancer-free nine years later. She said, “I’m a survivor but I don’t let it define me. I don’t run anymore, but I walk almost every day, plus swimming and various classes at the East Rowan YMCA. I started teaching water aerobics and Silver Sneakers shortly after I retired. I enjoy teaching and it keeps me active.”

Molly has participated in the last two local races. She said, “Goals going forward are just to keep moving. My morning walk gets me going for the day. These days, I’m slower but I’m still moving. I have made a point of doing some traveling, making at least one trip each year. But for the time being, my travel is on hold since I serve as caregiver for my husband, Bob.”

Updated events are at www.salisburyrowanrunners.org.