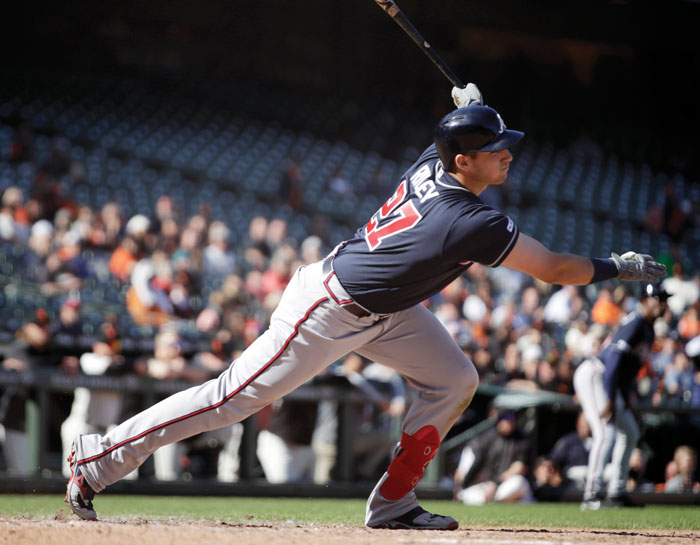 Escobar, acquired from Arizona two days earlier, went deep in the ninth of his debut with the Brewers. García had three hits, including a three-run homer, as the NL Central leaders got their fourth consecutive win.

Burnes gave up a season-high five runs on nine hits and two walks in four-plus innings. He allowed four runs in the first inning, matching his high total of runs allowed in a game this season.

Austin Riley hit a two-run homer, only the fourth allowed by Burnes this season, to highlight the big opening inning.

The Brewers rallied against Touki Toussaint (1-2), who couldn’t survive a four-run fourth inning.
García’s three-run homer tied the game in the third. After Kolten Wong’s double to right field drove in Jackie Bradley Jr. in the fourth to give the Brewers a 5-4 lead, Adames’ two-run shot knocked Toussaint out of the game.

Burnes’ NL-leading 2.12 ERA entering the game rose to 2.46. He gave up five hits, including run-scoring singles to Freddie Freeman and Stephen Vogt in the first.

Duvall arrived from Miami in time to start in left field. Duvall’s run-scoring single in the fifth drove in Freeman, who walked, to knock Burnes out of the game.

The other newcomers are expected on Saturday. The Braves began the day four games behind the first-place New York Mets in the NL East.

Toussaint allowed seven runs in 3 1/3 innings after giving up a combined two runs in his first two starts of the season.

Escobar started at third base. He could play a new position, first base, as soon as Saturday night. Escobar told manager Craig Counsell he will play wherever he is needed.

“Wherever you need me, I’ll be there for you,” Escobar said. “Most important to me is to play every day.”

Counsell said he plans to play Escobar at first base against left-handers. “We’ll have to see how that goes,” Counsell said. “The more he does it, the better he’ll get at it.”

Escobar made a strong defensive play for an inning-ending double play in the fifth. He took a strong throw from Bradley in center field and quickly made a sweeping tag of Duvall, who attempted to advance from second base to third on Vogt’s fly ball.

Braves: C Travis d’Arnaud (sprained left thumb) began a rehab assignment at Triple-A Gwinnett. The Braves want d’Arnaud, who has been out since May 2, to play nine innings in back-to-back games before he is activated.