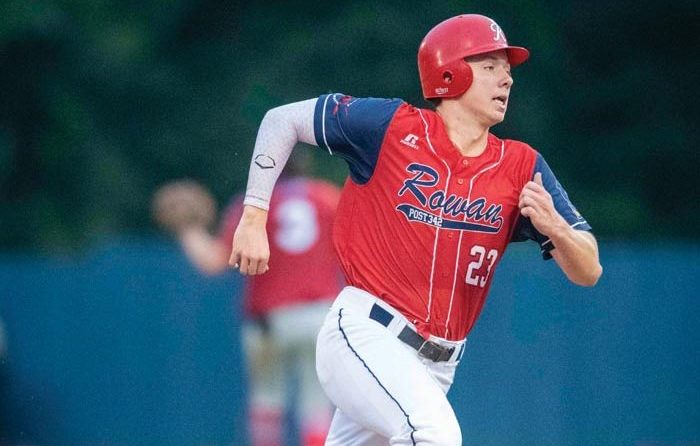 Rowan’s Aiden Schenck proved as strong on the mound Friday as he was getting around the bases for Rowan County's American Legion team. FILE PHOTO BY JON C LAKEY / FOR THE SALISBURY POST. 7/20/21, GRANITE QUARRY,NC.

CHERRYVILLE — Rowan County was outscored 23-10 in American Legion State Tournament pool play, but the only math that really mattered was 2 and 1.

That was Rowan’s record after Friday afternoon’s 7-4 victory against Wayne County (23-7), and it was good enough to propel Rowan into semifinal action today at 4 p.m. against Fuquay-Varina Post 116. F-V demolished Kannapolis and Wilmington in impressive fashion before losing a meaningless game to Rutherford County on Friday.

Rowan (16-5) successfully put a 17-1 loss to Cherryville, as dismal as it was, in the rearview mirror. It didn’t linger. It didn’t carry over.

“You lose by one or lose by 20, it’s still one loss,” Rowan head coach Jim Gantt said. “It’s easier to get past the one-sided ones than the close ones because you can see the one-sided ones coming. When you get beat 17-1, all you can do is go eat and try to get ready for the next one.”

Rowan’s pitching is a high-wire act. Rowan has none of the county’s top half-dozen pitchers from the high school season, and Dylan Driver, who was 2-2 at Carson, is probably the only Rowan Legion hurler you could put in the top 10. But the coaching staff has done an amazing job to piece a summer staff together. Unheralded guys such as Mattox Henderson have done well and Chase Drinkard, a community college pitcher, has been fabulous and has won six games.

Aiden Schenck is a slugger who batted.469 with a team-best 18 RBIs for East Rowan in the high school season, but he didn’t see the mound for a team that had three Division I recruits throwing bullets. His varsity high school pitching experience consists of one game as a sophomore when he played for A.L. Brown in the aborted 2020 COVID season.

But Rowan Legion had to audition for able-bodied hurlers, a casting call of sorts, and anyone with a strong arm got a chance. Schenck became a contributor to the staff, and on Friday, with Driver and Drinkard on the shelf due to pitch-count rules, and with Henderson used up in the loss to Cherryville, Schenck took the ball as the starting pitcher, with Rowan’s season on the line.

Slugger Logan Rogers, a college guy who throws hard from the left side, was stationed in left field, so he could switch places with Schenck as soon as Schenck ran into trouble. That way Rowan, which was not using a DH, could keep both of their bats in the lineup. They hit third and fifth.

“That was the plan,” Gantt said. “But then Rogers got hit by a pitch on his left elbow. That affected things some.”

Fortunately for Rowan, Schenck never ran into serious trouble. He got 19 outs, including snagging a line drive himself and turning it into a double play. He took the game all the way to the bottom of the seventh. That’s when he finally headed to left field with a deafening ovation ringing in his ears. Even the most optimistic Rowan fan couldn’t have seen it coming. Schenck allowed only two hits — a solo homer and a double. He struck out three and walked three. Mostly he got flyballs, and Rowan has guys who can go get flyballs.

“He threw strikes, but most of them were at the very top of the strike zone, so they were hitting balls in the air,” Gantt said. “A key for him was he could throw his curveball for strikes. He was able to mix it up enough to keep them off-stride.”

It helped that Rowan was in a terrible hurry to rebound from its debacle against Cherryville.  Charlie Klingler and CP Pyle got on base to open the game. Rogers sent them flying home with a booming double. Those were RBIs No. 43 and No. 44 in Rogers’ powerful season. Rowan didn’t stop there. Driver got the first of his four hits, Schenck lifted a sac fly, and Jacob Causey got the first of his three hits. Austin Fulk sent a triple slicing into the right-field corner. Rowan batted around against three pitchers. When the smoke cleared, it was 6-0, and Schenck strolled out to the mound with a nice cushion.

Rowan didn’t hit much after the first inning except for Driver (4-for-4) and Causey, who who went 3-for-3, plus a sacrifice bunt.

Wayne had gotten back to within 6-2 going to the fifth. That’s when Peyton Summerall singled, moved to second on Causey’s bunt and scored after a wild pitch and a passed ball. That made it 7-2. Schenck kept it that way until the bottom of the seventh.

Then it got exciting. Schenck got the first out in the bottom of the seventh, but then he walked a batter on his 103rd pitch. The pitch-count limit for a day is 105, and the call finally went out to Rogers to take the mound. Rogers struggled, probably the elbow barking, and after a walk, a balk and a double, it was 7-4. Gantt turned to Kaleb Burleyson, the pitcher/catcher from Salisbury High. Burlesyon, who qualified for a save, calmly nailed down the last two outs, a flyball to Schenck in left field, and then another one in the air to Driver in center.

Driver, who throws about 82 mph, was recruited by Catawba mostly for his exceptional bat and running speed. He and Drinkard are eligible to return to the bump today, so it will be in their hands. In a perfect Rowan world, Driver will pitch a complete-game win, and Rowan will still have Drinkard available for the championship game, but that’s a whole lot to ask. Most people believe Fuquay-Varina has the most talent of anyone in the tournament.

“Driver wasn’t very good in our first game here, but he’s always capable of being really good,” Gantt said. “If he’s on, it could get interesting.”