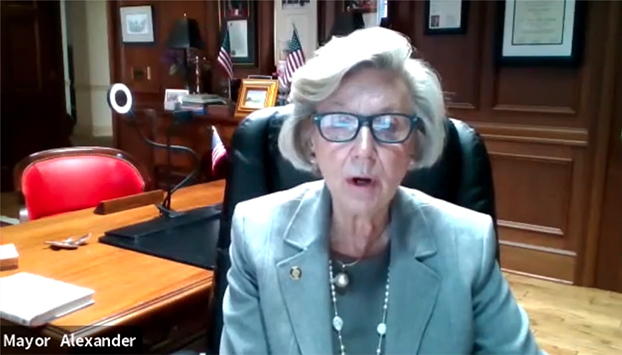 Salisbury Mayor Karen Alexander talks during a news conference held by the N.C. League of Municipalities.

During a news conference Tuesday with the N.C. League of Municipalities, Alexander, who presides over the League, was joined by Greensboro Mayor Nancy Vaughan, Kinston Mayor Don Hardy, Asheville Mayor Esther Manheimer and Mooresville Mayor Miles Atkins. All spoke about the need for investment in their respective cities. All are members of the North Carolina Metropolitan Mayors Coalition, a bipartisan group of mayors who lead some of the state’s larger cities.

Alexander said adequate infrastructure is necessary to grow and continue sustaining that growth, adding that housing stock that the needs of all residents, broadband and amenities such as parks and walkable downtowns are all increasingly being seen as critical infrastructure. She said insufficient infrastructure across the state has been unable to keep up with the growth in larger cities and rural areas are experiencing decreases in population and jobs. As a result, they are turning their water and sewer maintenance over to larger cities for support, she said.

“Cities and towns are where the rubber meets the road when it comes to determining infrastructure needs and then facilitating the meeting of those needs,” Alexander said. “We depend on the state and the federal government to be partners in this effort.”

Bipartisan Senate negotiators on Wednesday reached a deal on the package hours before the Senate voted to advance the legislation for a final vote. The motion to move forward was 67-32, with 17 Republicans joining all Democrats in the vote. Among those Republicans were N.C. Sens. Thom Tillis and Richard Burr along with Senate Minority Leader Mitch McConnell of Kentucky.

“Our plan will create good-paying jobs in communities across our country without raising taxes,” Tillis said in a statement following the vote. “Reaching this agreement was no easy task, but our constituents expect us to put in the hard work and show that two parties can still work together to address the needs of the American people. We appreciate our colleagues on both sides of the aisle, and the administration, working with us to get this done and we look forward to earning broad, bipartisan support among our Senate colleagues for this historic legislation.”

Though the details of the package are still being ironed out, it’s expected to total a little more than $1 trillion spread across eight years, with at least $550 billion in new spending. At least $100 billion is expected for roads and bridges, more than $70 billion in power infrastructure and more than $40 billion to help states and cities prepare for natural disasters and other consequences of climate change. The package is also expected to provide billions for investments in rail, public transit, transportation safety programs and a network of infrastructure aimed at electric vehicles.

At this time, the cost of the package is expected to be offset by increased revenues resulting from an IRS crackdown on tax cheats, the repurposing of more than $250 billion from previous pandemic aid legislation and the economic growth anticipated with the nationwide investment.

During this week’s news conference, Beau Mills, the director of urban affairs for the N.C. League of Municipalities, said it’s still too early to quantify how much of the money North Carolina will see, but he added the state can expect a hefty amount.

“In so many of our towns and cities, by working with our residents, we create a vision to know where we want to go, but we need the resources to get there,” Alexander said. “This infrastructure plan can help provide us with those resources.”

Alexander called the federal package a “100-year investment” that will guarantee a “phenomenal” return on investment.

While it’s still too early to know what projects are eligible with the federal funding, Alexander told the Post Thursday it could help pay for the second phase of the Downtown Main Street plan, approved by City Council members in March. The first requires a repaving and restriping to accommodate new traffic signals and lane changes. The second phase aims to beautify a 10-block stretch across both streets to provide pedestrian-focused amenities and other changes to sidewalks and parking. City Council members approved a contract last week totaling $146,661 plus incidentals to prepare for the repaving. The second phase requires grants to support the long-term vision.

Alexander told the Post she joined another call Tuesday with the United States Conference of Mayors to speak with U.S. Secretary of Commerce Gina Raimondo, who told them about another pool of funding expected from the U.S. Economic Development Administration that could help infrastructure projects that may not qualify under the federal package. With the EDA pool of money, Alexander said communities of all sizes could apply for grants up to $4 million. With money from both pools of funding, Alexander said she felt confident critical infrastructure needs in Salisbury can be met.