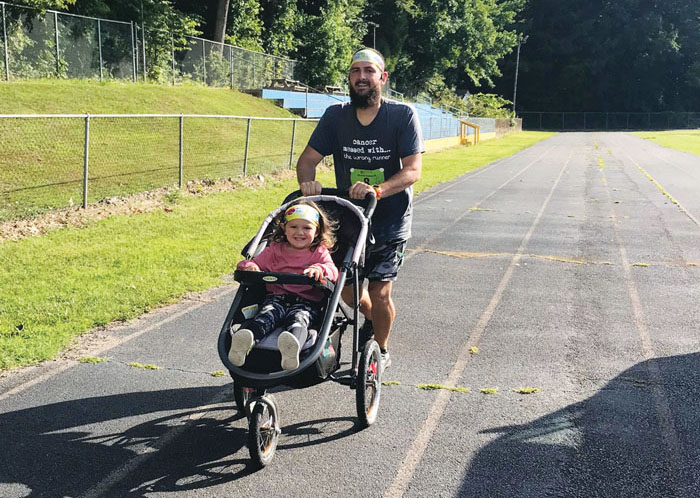 Merritt and Aaron Plummer enjoy another race at the Run for the Greenway 5K. Photo by David Freeze

Almost two years ago, I met Aaron Plummer on an assignment to cover his daughter’s health problems. Merritt was 3 years old at the time and recovering from a very serious condition. I met Aaron and Kayla, Merritt’s parents, and I remember that we touched on running just briefly.

Merritt might be her dad’s biggest supporter, especially when he pushes her baby jogger in a race. She likes to go fast, and so does her dad.

In December 2020 a friend of Aaron’s, Tim McBride, posted on Facebook about being a streaker. Tim is currently approaching 3,500 consecutive days running. His mottos have been “I run for those who can’t” and “A cancer patient can’t take a day off so neither can I.” Aaron said, “So that definitely hit home for me, and I decided to streak along with him. Merritt’s situation played a big part in my decision. I also did it because I knew after weighing the most I have ever weighed, I needed to do something to have a healthier lifestyle in order to enjoy more time with Merritt and Eli, my son.”

I saw Aaron at the China Grove 5K a few weeks back. I almost didn’t recognize him with an already 40-pound weight loss and he was obviously making fast progress toward better health. Aaron said, “Well my first goal when I set out this year was to run 500 miles during the year. I am currently at 490 miles so my new goal for the year is 1,000 miles. As for long-term goals, I want to continue to streak, not just for one year but years to come. I would also like to improve to be able to go from 5Ks to half marathons and then one day eventually to marathons.”

I asked Aaron what he considers the main benefits of running and racing are? Aaron said, “I feel so much better physically and mentally. Running not only helps your body and muscles get into shape but it is also a good way to clear your mind and get you in shape mentally. Competitive 5K races help in the mental aspect for me, because there is something about being able to run against other people instead of just out running by yourself.”

Aaron continued, “I hope Merritt and Eli both love to run as they grow up. Merritt loves to go fast while riding in a stroller during the 5Ks that we do. She will also request to join me very frequently on my daily runs and wearing her running shoes and clothes is a must. After I finish my run, she always says as she gets out of the stroller, “Got to get my run in.”And then Merritt goes ahead for her own run.

Watching Merritt ride in the stroller is fun too because doing so brings the biggest smile to her face. Aaron and Kayla use two single-seat strollers when they both are in races and so far, they don’t use the one double seater they have. I wouldn’t be surprised to see Aaron take on that challenge soon. Kayla usually walks when she can make the races and she pushes Eli.

In just a few years, it is likely to see the whole family competing often. Aaron recently posted fast 5K times of 26:20 and 25:54 at the Shiloh Missions 5K and the Run for the Greenway 5K.

There are no local races in August, but the Salisbury Rowan Runners will host a Prediction Run 5K on Saturday, Aug. 28 and at least another event in September. Check www.salisburyrowanrunners.org for the latest event updates.