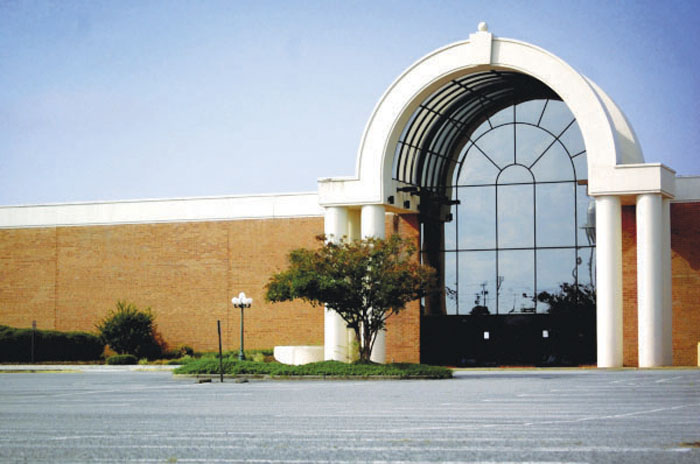 Plans for the West End Plaza, the former Salisbury Mall, will be on the agenda Monday. Josh Bergeron/Salisbury Post file photo

SALISBURY — At its first meeting in almost a month, the Rowan County Board of Commissioners on Monday is slated to receive a presentation regarding future plans for West End Plaza.

The presentation will be delivered by ADW Architects, a Charlotte-based firm hired several years ago to create a proposal to move Rowan County Cooperative Extension, the soil and water conservation district, N.C. Forestry Service and the Farm Service Agency to West End Plaza.

“Nothing regarding the plan is changing,” Chair Greg Edds said. “It is really to kickstart the project again, let them refresh where we were and really to go over any cost differences. We know there’s going to be some. That’s a fact. The question is just how much.”

Rowan County purchased West End Plaza, formerly the Salisbury Mall, in 2013. The facility still houses a handful of retail businesses, including Dollar Tree and Bath and Body Works. The 33,800-square-foot former JC Penney space is rented out by the county for events. West End Plaza was most recently used by the Health Department for vaccine clinics and as the site of a large job fair.

Commissioners have been considering renovating the facility for some time, but those plans were on hold last year due to COVID-19 and a moratorium on capital projects.

Also on the meeting agenda:

• A representative from McGill Associates engineering firm will deliver a presentation regarding plans to create an access road near the Rowan County Animal Shelter. The plan includes the construction of a roadway from Julian Road to serve James River Equipment, a farm equipment store located near the shelter. It will also include the extension of water and sewer to serve the new Dog Adoption Center, which is currently under construction.

• The board will consider formally authorizing the execution of a $400,000 building reuse grant the state awarded the county in support of Eastern Wholesale Fence’s relocation to the Mid-South Industrial Park on Statesville Boulevard. Last October, Eastern Wholesale Fence announced that it would create 142 jobs and invest $17.5 million with the project.

• Commissioners will consider authorizing County Manager Aaron Church to prepare and release a request for proposals to solicit interest from registered lobbyists to work with Rowan County. After discussing the idea of hiring a lobbyist to advocate for the county’s interests on the state and national level last year, commissioners included $60,000 for lobbying services in the current fiscal budget.

• Commissioners will consider approving a request from District Attorney Brandy Cook to hire two assistant district attorneys to “assist in the speedy disposition of cases involving a threat to public safety.” The positions will each cost the county $82,459 ($164,918 total) and the term of the agreement will be for a one-year period starting on Sept. 1 and ending on Aug. 31, 2022.

• Commissioners will consider declaring a .17-acre plot of land at 608 South Carolina Ave. in Spencer as surplus, which would initiate an upset bid process. The market value for the property is currently listed in the tax records at $14,500. The lot is buildable with the required setbacks and water and sewer are available. The town of Spencer received an offer in the amount of $8,250 for the property.

• The board will consider approving a request from the Health Department to reduce the number of temporary COVID-19 related positions. Last year, the department requested 11 positions be funded using state dollars, but is now asking for the positions to be reduced to 7.5 full-time equivalents. The change would reduce staff costs by almost $120,000 per year.

• Commissioners will consider approving an agreement between the county and the North Carolina Department of Transportation for a $247,140 Community Transportation Rural Formula Grant Program that will help Rowan Transit with administrative costs related to rural transportation activities.

• The board will consider an amendment to an interlocal agreement between the county and the city of Kannapolis for the county to allow the sale of the former site of the Kannapolis Intimidators Stadium. The Kannapolis City Council in May approved the sale of the stadium site for $3 million to Concord-based Fortius Capital Partners, who plans on constructing three industrial buildings. The county is agreeing to waive $2.625 million in debt that Kannapolis still owes on the stadium as long as the city funds infrastructure installations on the Old Beatty Ford Road interchange.

• The board will consider a request to authorize the operation of the septic tank system installed at the new concession stand at Dan Nicholas Park.

• Commissioners will hear an update from the Rowan Economic Development Council.