A new ride begins! San Diego to St. Augustine in about 40 days 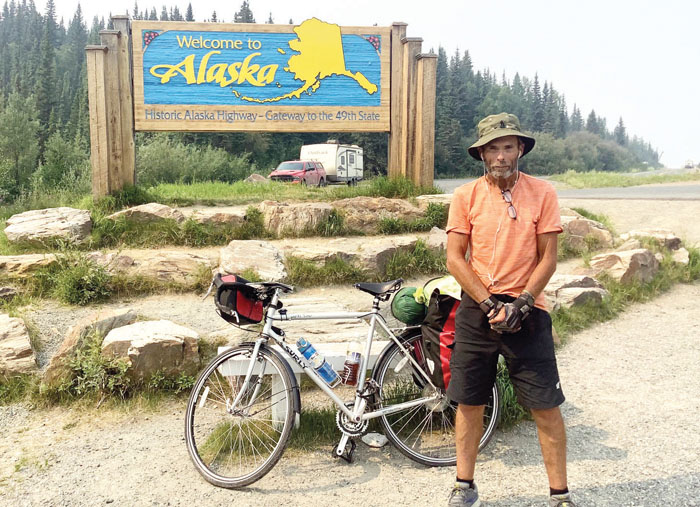 submitted photo David Freeze, who has cycled in all 50 states, is embarking on another cross-country bicycle journey, pedaling from San Diego, California, to St. Augustine, Florida, a total of about 3,200 miles.

My trusted bike, the long haul Surly, is on the way to Bernie’s Bike Shop near the beach in San Diego. My plane ticket is purchased, a fortunate break to get a direct flight all the way west.

I bought just a few small pieces of new gear because my trusted stuff has been proven to work. I did buy two new tires, hoping that both will survive the entire trip.

The route is called the Southern Tier, planned as the most reasonable route to cross the United States nearest the border with Mexico and then the Gulf Coast. Yes, it will be hot, often over 100 degrees. The climbing will be horrendous at times, and it happens fast. On the very first day of riding, Tuesday, July 27, I will climb to about 4,000 feet from sea level to a little town called Pine Valley, California. But as far as I can tell, that will be the biggest one-day climb on the whole route. I will cross the Rockies again, topping out at about 8,300 feet.

The Southern Tier Bicycle Route is the shortest cross-country route and offers a wide variety of terrain, vegetation, climate and people all the way across the nation from the Pacific to the Atlantic. I will see plenty of history and culture, ranging from the Spanish and Mexican influences in California, to the ancient pueblo cultures in Arizona and New Mexico, to the left-overs from the Spanish conquistadors in Texas, then the bayous and French influences of Louisiana, to the Old South of Mississippi and Alabama, to a 400-year-old city in Florida.

The route travels through the Yuha Desert early and the below-sea level, irrigated Imperial Valley before splitting the Dunes Wilderness Area in half. In Arizona, I will ride through Phoenix. Much of the route will be dry, sparsely populated ranch country where every town will be a welcome sight. Most of the ride will have so few supply points that I will stop at every store. Those often are stores that sell small amounts of a lot of things. I have seen a beauty shop and tire store in a convenience store that also serves as the post office.

The ride along the Rio Grande into El Paso, Texas, is going to be fun, with Texas dominating the entire route and taking up a third of the total mileage. Starting in El Paso, just across the Rio Grande River from Juarez, Mexico, the route follows the river southward before turning east. After Alpine, towns are few and the country desolate, full of sagebrush and tumbling tumbleweeds. As I travel through central Texas, the route crossed is the famous “hill country.”

Louisiana will have me traveling right through the middle of Cajun country, in places where I probably won’t be able to understand the English they speak. Mississippi offers rural riding all the way into Alabama, which will have some spectacular beaches along the way.

The scenery varies greatly across Florida, from the historic coastal city of Pensacola to the end in St. Augustine. I’m pretty sure I proposed to at least one of my wives in St. Augustine. Hope I don’t see her.

Several folks have asked why take this route now? It fits my schedule for this summer, and I only have to be home in time for the next beginning runners class that starts on Sept. 9.

Coverage will be slightly different in the Post this time. Traveling from the west coast puts a crunch on submitting my reports in time for printing the next morning. And there will be lots of areas with no cell coverage. The reports will appear in the printed paper on Tuesdays, Thursdays and Sundays. I will submit a new report daily, but the Post staff will put them together in order to publish in the next printed paper and online on those same days.

I have been to all of these states before, but only in Mobile, Alabama, will I be crossing a previous route. Sponsors for the ride so far include Father and Son Produce, Skinny Wheels Bike Shop, Leonard Wood, Dick and Jean Richards, and Vac and Dash of Albemarle.

As usual, I look forward to emails from readers. Your support and area knowledge has greatly helped me in the past and will again. The Post will publish a map regularly to track my progress. Contact me at david.freeze@ctc.net.

Female Athlete of the Year: Salisbury’s Webb shined in…