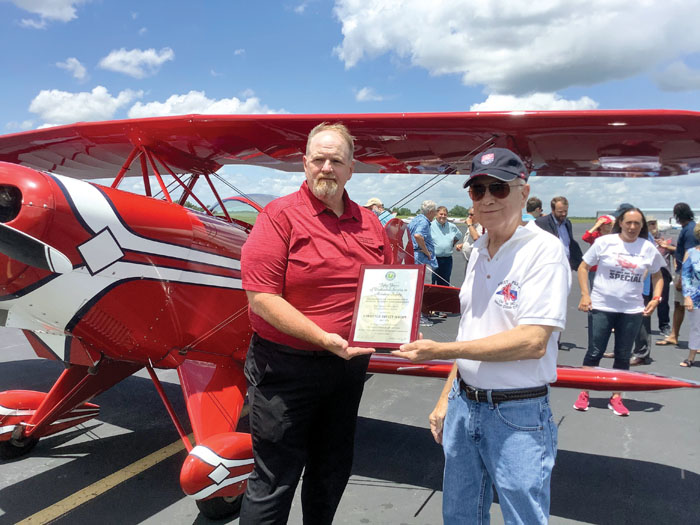 SALISBURY — About 62 years after his first airplane ride, Larry Macon was named a “master pilot.”

On Monday at the Mid-Carolina Regional Airport, Macon received the Wright Brothers Master Pilot Award, the most prestigious award that the Federal Aviation Administration issues. The award is named after the Wright brothers — credited with inventing, building and flying the first motor-operated plane — and is given to individuals who have exhibited professionalism, skill and aviation expertise for at least 50 years while piloting aircraft as “master pilots.”

“Larry has been accident-free, with no violations or accidents for 50 years of flying,” Meyer said. “I have gotten to know Larry through the process of this award to be an aviation ambassador, always promoting aviation to someone. Larry is a student of the game, always learning.”

Meyer reported that most recent figures show that 6,572 pilots nationally have earned the award, with 175 of them in North Carolina.

Macon’s first flight happened after a family friend invited his dad, who never realized his dream of being a pilot, on a flight. Macon tagged along.

“I was so excited and kept running back and forth from side to side in the back of the plane,” Macon said. “I couldn’t believe the view of everything so small from that altitude.”

The senior Macon saw his son’s excitement and offered financial assistance. Later, with college about to run out, Macon took him up on that offer and began his dream of flight. 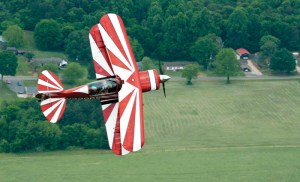 JON C. LAKEY / SALISBURY POST
Larry Macon puts his Pitts special on edge during a flight over Rowan County in 2015. Macon has received the Wright Brothers Master Pilot Award, the most prestigious award that the Federal Aviation Administration issues.

Macon’s first flight lesson was at the then-Rowan County Airport on June 1, 1968. Within a month, he completed his first solo flight. Another month later, he flew solo across country on July 20. Macon got his commercial certificate in 1987 and became an advanced and instrument instructor on March 18, 1988.

As a charter member of Cloud Capper’s Flying Club, Inc. in 1970 at what’s now Mid-Carolina Regional Airport, Macon serves as treasurer. He bought his first plane, a 1998 Super Decathlon, in March 1999. He’s flown a total of 84 different airplanes, with 3,030 flight hours and 1,900 takeoffs and landings.

Macon sold the Decathlon and acquired the aviation love of his life, a 1996 Pitts Special S2B, affectionately called “The Ride.”

“The plane is like NASCAR on wings with a skin, tubes and a big engine,” Macon said. “I was fortunate to find exactly the plane that I wanted.”

Macon on Sunday talked about his first ever aerobatic flight in 1980 with then-airport manager and aviation showman Lindsay Hess.

“He had a Pitts too, a little underpowered than mine, but it set me on a path for aerobatic instruction,” Macon said.

To date, Macon has over 1,000 hours in aerobatic flight.

Completely hooked on aerobatics, Macon participated in his first International Aerobatic Club competition on October 15, 1999, in Farmville, Virginia. Since then, he has competed in 42 IAC contests in 11 states with an incredible record of success. Winning first place in 30% of the events, Macon has also placed either first, second or third in 67% of them.

“I only competed twice in 2019 but won first place in both the New Jersey and Virginia contests,” he said. “Then I missed a year and a half for COVID. My first competition for this year was on May 14 and 15 in Rome, Georgia, resulting in a second-place finish.

A mechanical engineer by trade, Macon spent 40 years at what was eventually known as Performance Fibers in polyester manufacturing, maintenance management, mechanical design, marketing and sales. Business travels have included 38 states and 27 countries.

Hobbies other than aerobatic competition flying include driving and maintaining classic cars, currently a 1978 Datsun 280Z and a 1969 Chevelle 396 SS. Macon and his wife, Pat, have been married 38 years.

“And I also play golf, but I am much better at flying,” Macon said.

Kyle Bridges, from U.S. Rep. Ted Budd’s office, attended the ceremony and read a statement: “To most people the sky is the limit, but to others the sky is home.” And Macon added, “And to me, it’s a playground.”

Macon and his wife Pat have been married 38 years. Pat said, “Larry joked that I have never flown in his Pitts, and I have only seen it four times. I know I have seen it at least five times! I like to fly in our other plane to the beach and to see friends but flying around in circles like Larry does in the Pitts is his time. I am so proud of him, he has put in the work, but I am scared for him too and nervous but would never ask him to stop. I pray that he will be safe every day, and he does that for me too.”

Mid-Carolina Airport Manager Valerie Steele said she’s been in her position for about 19 months, which have already include an aerobatic ride with Macon.

“I get to have personal interaction with lots of aviation people and Larry is one of the best pilots, but better yet, he is just simply a good man,” Steele said.

College baseball: Love picked in the third round by…