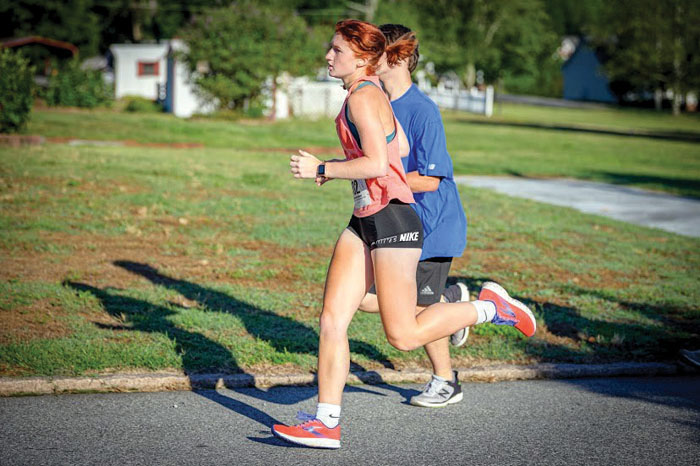 Meredith Bonner on the way to winning last Saturday’s Shiloh Missions 5K in Faith with a time of 21 minutes and 27 seconds. Submitted photo.

Meredith Bonner started at East Rowan High as a freshman basketball player and was, in her own words, unhappy with her skill. She continued to struggle except when the team moved to the track for conditioning workouts that often included lots of sprints. Meredith said, “I was always ahead on the workouts, and I had never felt so excited to actually win. My coach pointed out that I should try track, as it seemed I would excel in that far more than basketball. That spring, I started my first ever track season, and it was the best decision I have ever made.”

As a soccer player through the eighth grade, Meredith realized that her success came there too because of running ability. As a sophomore, she ran track and cross country and joined the swim team. She said, “Other than the ridiculous-looking cap and goggles we have to wear, swimming is an amazing outlet. Swimming always allows my muscles to take a minor break from running, while continuing to stay in shape. The meets are a fun time, and I love all my teammates dearly. The green hair from the chlorine-filled pools were always a nice bonus as well.”

At home with her mother, stepfather, grandmother and two younger brothers, most more artistic than athletic, Meredith finds inspiration in her stepfather. “He excelled at tennis and swam in his youth. He’s been an athletic role model for me, and I never want to let him down. My younger brothers, Thomas and Joshua, both play tennis and soccer. My mother is the most supportive human being on the planet. I could fall and face-plant during a track meet, and she would still try and convince me of how well I performed.”

That support was important during the past year when In November 2020 and in the middle of cross-country season, Meredith had a bad car accident. The other person thankfully was uninjured, but Meredith’s car was totaled. She said, “I ran a cross country meet the next day, and everything seemed fine afterwards. Later that evening I could not walk on my left side, and halted running for days, thinking that it might be better with a few days’ rest. A couple more weeks went by with no improvement. Familiar with hip issues from my freshman year of track, I developed a stress fracture in my right hip, and was out for the entire end of the season. This time, it seemed I developed a stress fracture from the pressure of the car accident on the left side of my hip, worsened by the meet I had ran the very next day. I was forced to miss the county meet, unable to run again until the conference meet the next year. This experience was both physically painful and mentally draining. Running had become my crutch, and without it I felt very empty and upset constantly. I made a full recovery by the beginning of this year, and thankfully have avoided any hip problems since. In this process I learned to always remain positive and to take more care of my body and mental health. Coach Cris Leckonby was huge for me through all of this.”

Away from running, Meredith’s passions include reading, writing and art. She collects fantasy, classical literature, science fiction, and romance novels and wants the opportunity to write one day, have her own library, and possibly even meet some of her most influential authors. Art is another pastime that has helped her through tough days. She loves colors and creating new pieces that come to life on a blank paper.

Already the county champion in the 1600 and 3200 and all-county in cross country while about to begin her senior year, Meredith said, “It’s very bittersweet to have my last year of cross country and track coming up so fast. I’m intent on breaking 21 minutes in cross country with more hard work. This track and field season, I will keep working to qualify for regionals in the 1600, wanting 5 minutes and 40 seconds by season’s end, as well as shaving a few seconds off my 800.

Academically, Meredith hopes to improve her GPA this year, and make her first ever A in math. She said, “I hope a college sees potential in me and asks me to run for them. I would absolutely love to run track and cross country in college while majoring in English. With there being few options for an English major, I’ve considered teaching as a very viable career path.”

Look for this Saturday’s Run/Walk for the Greenway 5K and other events at www.salisburyrowanrunners.org