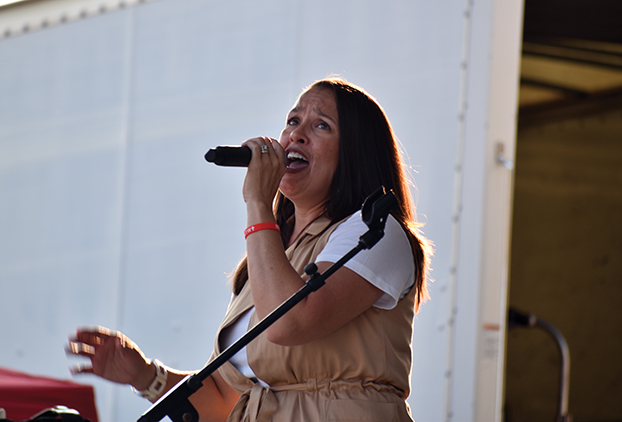 FAITH — After singing for church congregations from the time she was 3 years old, Charity Grindstaff finally felt the nerves when she was a teenager.

“When I was 12 years old and realized I was up there singing in front of people, I got scared then,” Grindstaff said. “Knees knocking, microphone shaking.”

Out of sudden shyness, Grindstaff stopped singing in front of her church for several years. It wasn’t until she was 20 years old and was anointed that she returned to the stage.

“The Lord is there with me, so I have no fear,” Grindstaff said.

There were certainly no nerves when Grindstaff stepped onto the stage in Faith on Monday night and belted out a rendition of Casting Crowns’ “Who Am I.” The passionate performance won her this year’s Faith Idol competition and $700. Instead of having contestants compete in separate age divisions, the 21st iteration of the contest had eight contestants sing head-to-head. The eight competitors sang on Friday night and the four finalists were brought back for the finale on Monday night.

The fourth place competitor was two-time Faith Idol champion and Spencer resident Adam Broyles, who sang “Pray for Me” by Ernie Haase & Signature Sound. Third place was claimed by Ashley Hinson with a rendition of “Clean” by Natalie Grant. Finishing in second was Nathan Leazer who sang Tyler Childers’ “Feathered Indians.” The competition was sponsored by F&M Bank. Representatives from the community bank handed out prizes throughout the show. 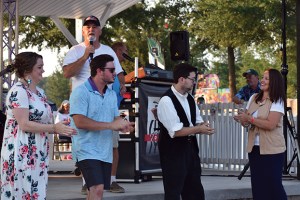 Grindstaff, who lives in Concord, remembers watching the Faith Idol competition when she visited the Faith Fourth of July celebration with her family over a decade ago. As a fan of the musical reality TV show “Star Search,” Grindstaff was immediately interested in the contest. However, it wasn’t until she saw an advertisement for this year’s Faith Idol on Facebook that she decided to sign up and compete herself.

“I thought it would be a way to reach souls to minister through lyrics,” Grindstaff said.

During the first round of the competition, Grindstaff showed off her vocals by singing “Bring the Rain” by MercyMe. Not expecting to move on to the second and final round, the song was Grindstaff’s ace in the hole.

“I was thinking, I’m going to get up there and sing and I’m going to bless somebody and then I’m going to go home,” Grindstaff said. “You don’t want to have that mentality of ‘I’ve got this.’ It wasn’t about winning. It really wasn’t.”

To determine her song choice for the final, Grindstaff turned to her typical source of inspiration — prayer.

“I was sitting on the couch Friday night, and I always pray before I sing a song or lead songs at our church, and I said ‘Lord, I need you to tell me what I need to do,’” Grindstaff said. “I needed a song I was very comfortable with that shows range in my vocals.”

As she was singing in the final Monday night, Grindstaff said it felt like she was connecting with the crowd.

“I felt like I was blessing people with the responses and feedback I got,” Grindstaff said. “As I was singing, there were people standing up and worshiping him, raising their hands. You could feel it.”

Even though she’s been performing for congregations since she was a young girl, Grindstaff said it was the largest gathering she’s performed in front of in her life.

“About 200 people was my max until just now,” Grindstaff said.

It was only the second singing competition Grindstaff has entered. The first was at a musical festival and talent search hosted by the Bowling gospel music family in Kentucky in 2018. In comparison to that competition, Grindstaff said Faith Idol felt much more comfortable.

“It was a great environment, a great atmosphere,” Grindstaff said. “It wasn’t critical or judgmental. You got judged, but you didn’t feel that way. You could be yourself here.”

Grindstaff didn’t practice much leading up to the competition. As the music leader for The Revival Hour Church in Concord, she typically performs several times a week. Grindstaff’s two daughters and son also sing at the church and her husband plays several instruments. Outside of the church, Grindstaff said she is constantly singing at her home or while she’s driving.

Following the conclusion of the competition, Grindstaff knew exactly how she wanted to celebrate — with a breezy ride back to Concord in her Corvette.

“We are riding with the top down on the way home,” Grindstaff said.

Patriotic Fourth of July parade wraps up return of…