SPENCER — Holding each other with smiles on their faces, a graying couple is blissfully unaware of the flames quickly consuming the curtains behind them.

The fire might look like movie magic, but Michael Lanning says the flames were as real as any. 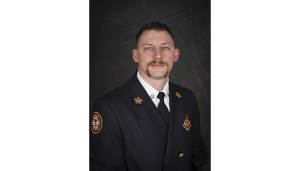 Lanning, chief of the Spencer Fire Department, would know. He helped set the blaze.

But the couple seemingly in danger of being burned alive was never in real peril. They were only actors. And the living room behind them was just a set. All of it was filmed in a controlled environment inside the fire training facilities at Rowan-Cabarrus Community College.

Cut together with other footage shot elsewhere in Rowan County and near Nashville, the fiery scene is the climactic moment in the music video for “The Kind of Love We Make” by country music star Luke Combs. Released earlier this month, the video has already garnered 2.6 million views on YouTube.

The iconic Dairy Queen at 1004 W. Innes St. might be the most recognizable Rowan County landmark featured, but a handful of other local spots also served as filming locations.

The video was brought to life by TA Films, a Charlotte-based production company and studio founded by Tyler Adams almost a decade ago. TA Films has shot and produced almost a dozen videos for Combs, who is a North Carolina native but now lives near Nashville.

The portions of “The Kind of Love We Make” video with Combs were shot in Tennessee. The rest was filmed at the Spencer Fire Department, High Rock Lake, RCCC, Dairy Queen and at the fire-damaged historic home at 1008 N. Main St. in Salisbury.

The primary storyline for the video, which centers on a firefighter and his paramedic girlfriend, called for real firefighters to be involved. Will Rooney, writer and director on the project for TA Films, was childhood friends with Lanning when the two were growing up in Mocksville. And Rooney happened to come across Lanning’s social media page at the right time.

“(Lanning) had somewhat recently become the fire chief of Spencer and I stumbled upon it on Facebook when the project was already in production,” Rooney remembers. “It was like fate.”

Brian McLawhorn, a producer on the video for TA Films, also happens to live in Spencer near the fire department.

Capitalizing on those connections, TA Films reached out to Lanning to see if his department would be interested in hosting the production and in providing some real-world expertise.

For Lanning, it was a no brainer.

“It’s not normally in our wheelhouse to be extras in a music video, but it was a good opportunity,” he said. “We do and see so much negative running calls and whatnot and sometimes those outcomes are negative. Something like that is something fun, something positive.”

Shooting took place in a matter of a few days at the end of May.

“Time was at a premium,” said McLawhorn, adding that the Spencer Fire Department was a “perfect spot” because it was just a few minutes from the other locations in Rowan County.

The crew filmed a scene at the Spencer Fire Department. To help the camera person get the exact shot they wanted of the firefighter actor looking into his locker, real firefighters at the department cut a hole in the locker.

“That’s just an example of how welcoming they were and how easy they were to work with,” Rooney said.

Lanning, who earned a producer credit on the video, was also integral in arranging the ignition of the video’s living room set inside RCCC’s burn building. The feat proved to be a fun challenge.

“The easy part was keeping it safe,” Lanning said. “The problem was getting it to burn in such a way that they could get the shots and the footage they needed.”

Several sets of curtains were harmed in the making of the video.

In another fortuitous moment, TA Films set designer Ricky McSwain owns the historic home at 1008 N. Main St. that sustained significant damage in a tragic fire several years ago. McSwain had started to fix up the home, but was able to re-expose the roof, giving the structure the look of a home being burned.

“That was perfect. It gave us a house that was already charred in a lot of places,” McLawhorn said. “We didn’t have to go in with set designers and set builders and change a lot of that.”

Other Rowan Countians served as extras for the house fire scene.

“They wanted the scenes to look as realistic as possible so Rowan County EMS provided an ambulance and an off-duty crew for that shoot and in the background you can see myself, our firetruck and our staff spraying water on the house,” Lanning said.

Unlike the fire at RCCC, the flames consuming the home in the video were added digitally.

Yet another scene was filmed in and around a house on High Rock Lake.

Lanning said participating in the process made him realize just how much work goes into making a music video. “It’s eight hours of work for 30 seconds of footage,” he said. Being part of a video seen by millions is a career highlight for Lanning.

Filming the video in the county he calls home was equally enjoyable for McLawhorn.

“Everyone in Rowan County that we came across was easy to work with,” he said. “It was smooth sailing and if there’s something to point out it’s how great the people were to work with and film this and to give them something they’re proud to be a part of.”

Rooney added, “It takes a village to make a video and this was no exception and we really appreciate everyone who had a hand in this project.”